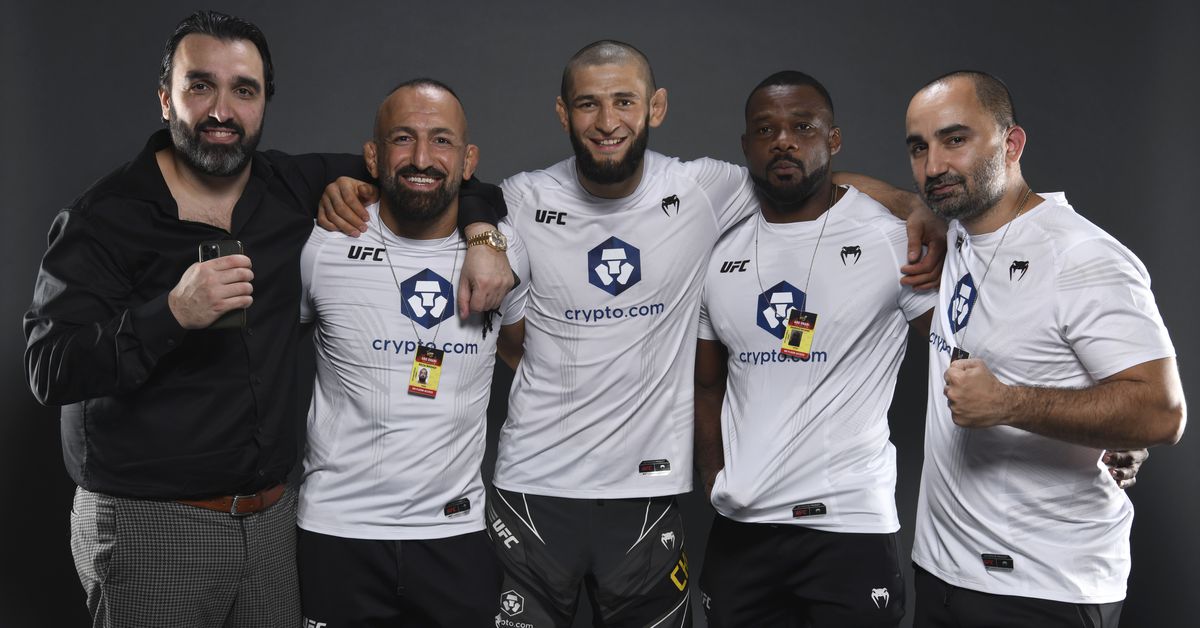 Khamzat Chimaev may have won in dominant fashion at UFC 279, but he didn’t exactly make any fans in the process. Chimaev didn’t make a great impression on the Las Vegas crowd by missing weight terribly and then flipping them off at the weigh-ins, and his weight debacle has left his future at 170 lbs. uncertain.

Former UFC Lightweight champion Khabib Nurmagomedov knows what it’s like to rise quickly up the ranks as an undefeated star. “The Eagle” offered advice to “Borz” recently, telling Chimaev to keep a good team of loyal friends around him. Specifically, Nurmagomedov advised him to surround himself with Muslims to keep him in line and away from taxi-stealing troublemakers.

At least one member of Khamzat’s team has now responded. Former UFC Lightweight Reza Madadi has trained with Chimaev at All Stars MMA in Sweden, and he’s been in his corner in previous UFC fighters. Madadi respectfully responded to Khabib, defending Chimaev and explaining that there are good people in his corner, Muslim or otherwise.

“Dear @khabib_nurmagomedov, my muslim brother,” Madadi wrote on Instagram. “Firstly I would like say I have a huge respect for you as an athlete and for all your achievements in our beloved sport of MMA. I am also very proud of how you represent our religion, belief and God in all your interviews and appearances.

“But, I would like to give my point on your opinion on @khamzat_chimaev not having a muslim team around him and that was supposed to be the reason of him missing the weight. I have to disagree with you on this part. Not only have Khamzat had muslim friends and teammates such as me around him from day 1, but also from many other religions and backgrounds, The have been people that have been with him from the start, giving him love, sharing blood, sweat and joy and done everything to bring him to where he is now.

“Being a muslim doesn’t mean we are perfect and flawless, trust me, I have done many mistakes in my life as many people know. With all due respect, so have you. So mentioning having muslim team will make you perfect, I have to disagree, having a team that cares about you. in good times and bad times, no matter what belief or religion they have is far more important. And that is something Khamzat has. There are several issues that made Khamzat miss the weight but those reasons stay in the team. But he is still young and he will learn from his mistakes.If a big Champion like you, did learn from your mistake when you missed weight, I have no doubt that our brother Khamzat will do as well.”

At the time of writing, Chimaev himself has yet to respond to Khabib’s comments.

At some point a few years ago, Li Jingliang seemingly just decided he was going to start hurting people, and he’s now one of the heaviest hitters at 170 lbs.

Tangentially related anecdote: Back in the day, I watched my then 19-year-old former MMAmania video co-host Andrew Coyne beat up a grown man in front of his front row wife and kids at an amateur event.

Life comes at ya quick!

Check out Bane in action!

Tony Ferguson is working with his new team, but I really hate when Daniel Cormier is right.

Terrence McKinney basically got left on read by The Rock.

My tweet to the rock about his shoes went viral and Sports Illustrated even wrote an article about it but he never replied to me. At least he’s able to tweet about penguins and wrestlers from the 80s tho ‍♂️

Im only going to fight the rock
Otherwise I’m goood

Floyd Mayweather has said he will make $15million-$20million for his exhibition fight with Mikuru Askaura in Japan this weekend: “It’s cool. Nine minutes, $20million, not bad.” [@MailSport]

UFC 179 was eight years ago, but Jose Aldo vs. Chad Mendes 2 remains an all-time display of elite MMA talent.

Folded the elbow over and took away the knees instantly:

I hate that modern MMA rules make it so hard for strikers to punish awful takedown attempts. If kicks are too far, allow knees at least!

Some incredible shots from space!