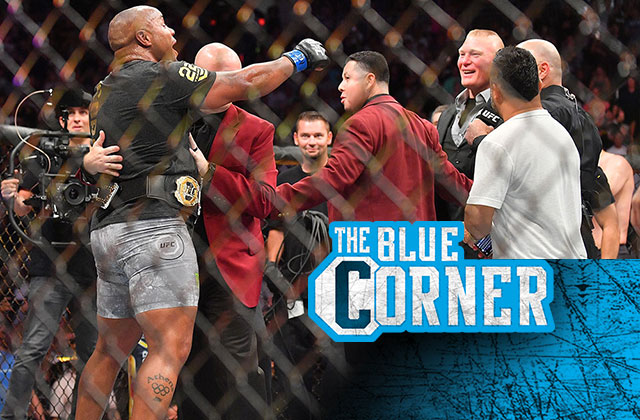 Former UFC double champion Daniel Cormier is finally dipping his toes into pro wrestling by serving as the special guest referee for the Seth Rollins vs. Matt Riddle Fight Pit match at Extreme Rules. The question is whether this is just a one-off appearance or the start of something bigger — say, perhaps, leading to a match between Cormier and a certain WWE star he never got to fight in UFC.

The wrestler in question is Brock Lesnar, who doesn’t currently have a WWE program going but is rumored to be returning as soon as Crown Jewel in November. That would feel a little fast for a potential Cormier-Lesnar match, but on a recent episode of Wrestling Observer Radio, Dave Meltzer thought it could come together in time for WrestleMania 39.

“Very, very often when you do this, it’s the setup — Ken Shamrock did that, started as a referee for the Bret Hart and Steve Austin match — and then you transition into wrestling. I’m sure he will never do full time WWE wrestling, but would he do a match at WrestleMania? I could see it, where you do it with Lesnar. I could see it, he’s a big wrestling fan, he might want to do it.”

Meltzer also noted that there was a time when the 43-year-old Cormier gave more serious thought about making a jump to pro wrestling with TNA before pursuing MMA instead. That turned out to be a prudent move as he won UFC championships in both the light heavyweight and heavyweight divisions during a Hall of Fame career.

But though Lesnar was also a UFC heavyweight champion, the two men never crossed paths in the octagon despite teasing a fight in 2018. A WrestleMania match between them would be the perfect way to inject some outside star power into WWE’s biggest show of 2023, potentially luring some UFC fans who might not otherwise watch,

First things first, however. For the first glimpse of Cormier in a WWE event, you’ll want to tune in Saturday, Oct. 8 (on Peacock in the U.S. and WWE Network internationally) to see if D.C. calls the Rollins-Riddle Fight Pit match right down the middle.