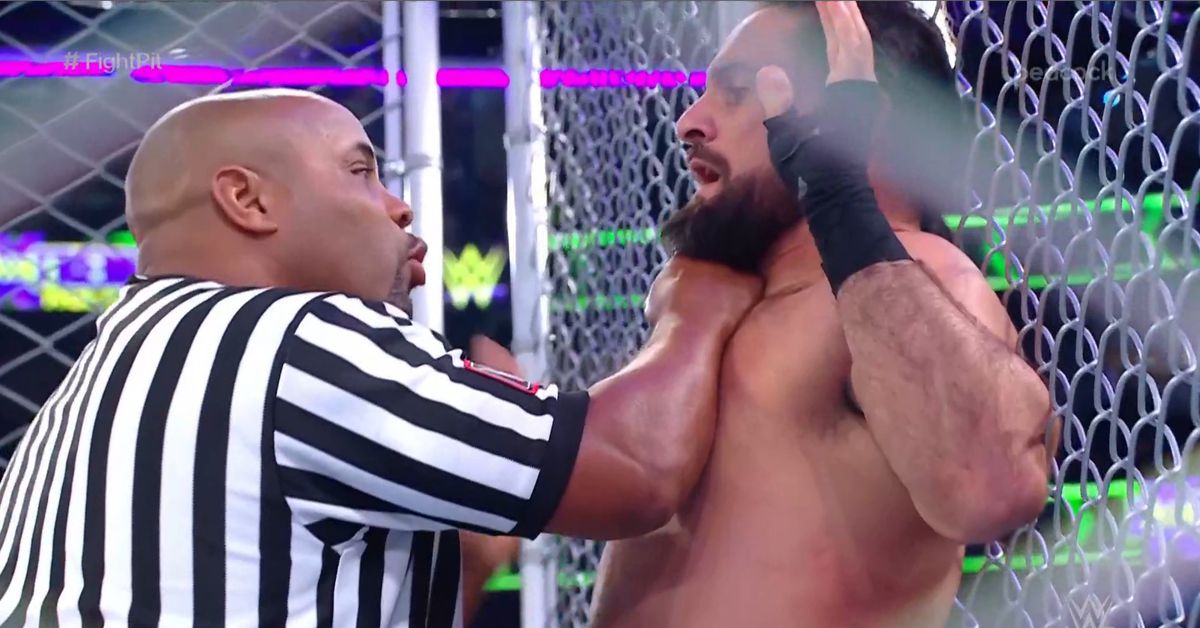 Daniel Cormier made his WWE debut as a special guest referee at the pro wrestling promotion’s big Extreme Rules event in Philadelphia. “DC” was tasked with keeping a ‘Fight Pit’ match between Seth Rollins and former UFC fighter Matt Riddle under control, and by all accounts did a great job.

Wrasslin’ sites across the internet gave the Rollins vs. Riddle fight an A+, and credited Cormier for not picking sides. The former UFC double champ had moments with both Matt Riddle and Seth Rollins where he admonished them for trying to mess with his referee duties. In the end it was Riddle who scored the win, forcing a tap out of Rollins with a triangle choke (watch all the video highlights right here).

Following the fight, an extremely happy Daniel Cormier talked to WWE.com about the experience.

“It was amazing,” Cormier gushed. “Those guys fought, you know? You knew that a rivalry like that needed an ending like that. Something … very true. Something that cannot be questioned. And Matt Riddle got it done. It was tremendous being inside the Fight Pit.”

Cormier also addressed the moment during the match where Seth Rollins grabbed him and he had to assert his authority.

“I had to put him in his place because he’s being disrespectful,” he said. “He grabbed me as I’m checking on Matt Riddle. But I said that I would be fair. I thought I was that tonight. I came here to do a job and I thought did that job to the best of my ability. Thank you guys for having me, I appreciate it.”

Who knows where this budding bromance between Cormier and the WWE will go? “DC” has been an avid wrestling fan for years, and current WWE leadership doesn’t seem to have the same qualms about bringing in and putting over UFC personalities.

Back in 2018, Cormier and Brock Lesnar got into a shoving match inside the octagon. Could we see a resolution to that feud in the WWE ring some day?

“When something like this happens — and this was, honestly, very good for me — because people started to talk,” Cormier said in an ESPN interview leading up to Extreme Rules. “People started talking about, ‘Oh my goodness, I remember when him and Brock were in the Octagon and they were supposed to fight.’ So, it seems to make a lot of sense.”

“But as you know, just because something makes sense, it doesn’t mean that it’s going to happen. So, no, there is no talk of me fighting Brock Lesnar.”

While Daniel Cormier has admitted there’s been no talks about that, he seems more than willing to participate in the WWE circus moving forward. And honestly, we’d love to see it. The dude obviously cares about pro wrestling and takes it seriously. Bring “DC” back for more, WWE!