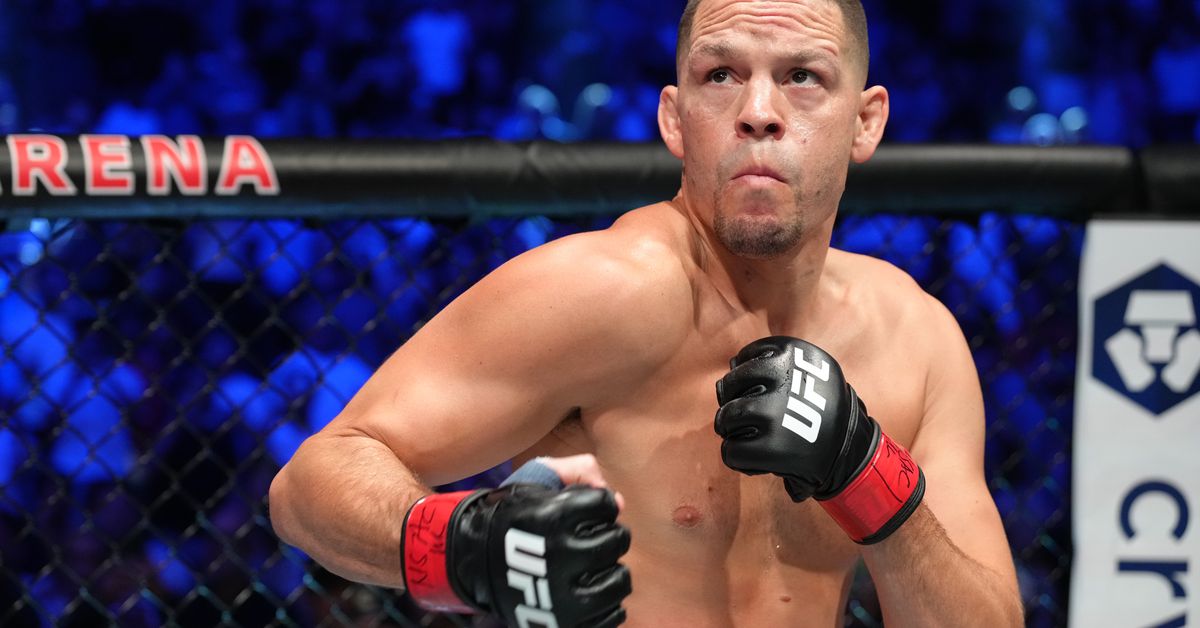 Diaz may be closer to the end of his fight career than the start, but that doesn’t mean his immediate future is decided. The Stockton slugger fought out his UFC contract when he defeated Tony Ferguson at UFC 279, making him the biggest MMA star to enter free agency in quite some time. Larger rival promotions like Bellator and PFL have expressed interest in the Welterweight, and Nate Diaz also has his own fight promotion that could conceivably host his next bout.

Those are just some options in the cage. Were Diaz to make his long-awaited boxing debut, he’s been courted by Jake Paul, as well as Floyd Mayweather and the RIZIN team. In the bare knuckle arena, perhaps a scrap with Mike Perry could help grow the younger sport.

Earlier today, Diaz perhaps dropped a hint towards at least one aspect of his future plans. He posed with WWE superstar and executive, Triple H, accompanied by the caption, “We’ll see what’s bout to happen next.”

Of course, Diaz wouldn’t be the first MMA star courted by the squared circle. Just last month, Triple H was spotted with UFC Welterweight kingpin Leon Edwards, who perhaps could avenge an infamous 1-2 and point in the world of wrestling?

We’ll just have to stay tuned to see where Diaz ends up.

Rumor is Tai Tuivasa will return at UFC 284 in Perth, Australia. Who would you like to see “Bam Bam” fight next after his UFC Paris barnburner vs. Ciryl Gane?

A cordial chat between Aljamain Sterling and Petr Yan — nice to see!

Has the 2022 Crypto crash brought an unceremonious end to UFC’s Crypto bonuses? If so, Rose Namajunas winning a fan bonus for her performance against Carla Esparza will always live on in our hearts as a classic MMA moment.

Also, the fighter crypto bonus was shelved for ‘re-tooling’, but with the dotcom being in deep cost cutting mode I would he surprised to see them return… In fact, the retooling may have just been a cover to do away with them in the first place…. https://t.co/arLP67U6SK

All the best to referee Mike Beltran, who’s currently recovering from diverticulitis, a digestive disorder I only know about due to MMA.

Thank you everyone for wishing me well. I’ve be hospitalized with diverticulitis and had a rupture in my stomach causing sepsis. Thankful to my lady who has taken care of me since I was hospitalized. She’s been a “ROCKSTAR”. For now, I need rest and time off to get better. pic.twitter.com/OKA6qkiENg

I was lucky enough to train under TJ Dillashaw for about a year when I was 18 and not particularly good at the whole fighting thing. He was very kind and took the time to go above and beyond when teaching. I will always appreciate the instruction and friendship.

He also beat my ass once over a shoulder lock attempt and routinely f—ked dudes up. The duality of man!

Julian Lane — of “Let Me Bang Bro!” fame — was utterly destroyed by a tremendous counter left hook over the weekend.

Interrupted the advance with a well-timed cross:

Midnight Music: A song I loved, forgot about, and was glad to rediscover.