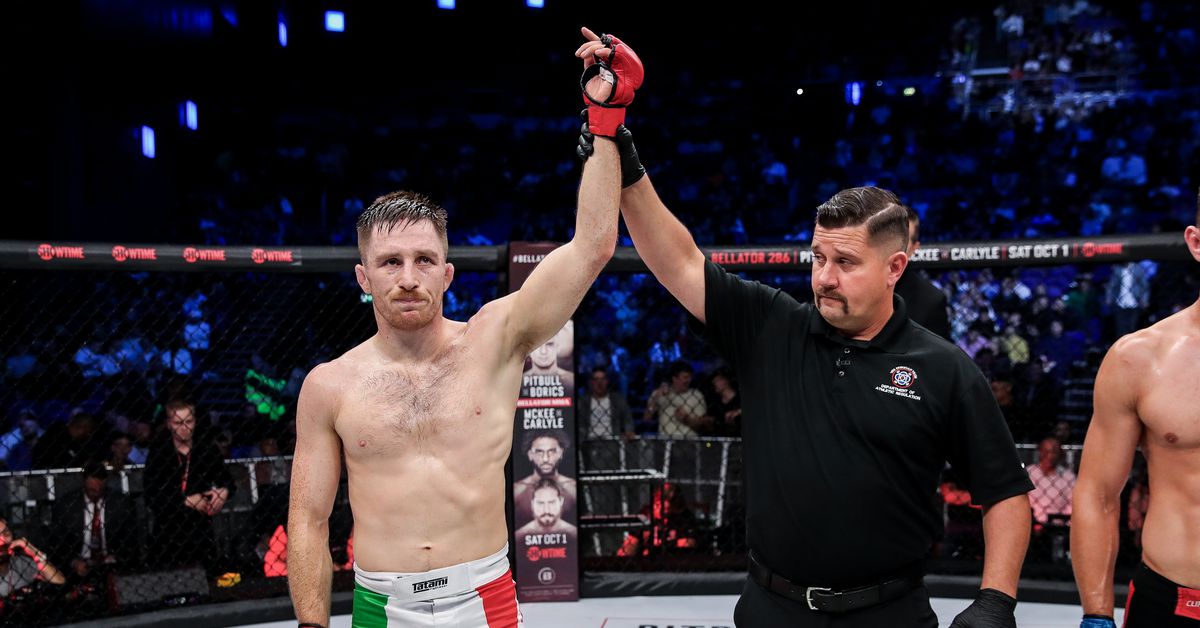 In a perfect world, Brett Johns would be completely happy if his career ended with Bellator MMA.

That said, the veteran bantamweight understands that the Paramount-owned promotion wasn’t all that happy with his recent win over Jordan Winski that ended in a lopsided decision but wasn’t exactly the kind of fight that will be replayed as one of the best of the year when 2022 is over.

While winning should always matter most, Johns knows that there’s always going to be an entertainment value tied to every performance, which is why he’s willing to bet his career on his next fight.

“I’ve had messages from Bellator saying they’re unhappy with my last few performances and I feel personally I need to do something about it,” Johns told MMA Fighting.

Johns was actually scheduled to face Gallagher at Bellator’s most recent event in Ireland but the Team SBG and Glory MMA and Fitness fighter was forced off the card several weeks before the show took place.

That’s how Johns ended up with Winski as an opponent and he ultimately took the fight despite a rib injury that happened during his training camp. Johns also suffered a foot injury from a kick he threw against Winski but he’s still not making excuses for what many are calling a lackluster win.

Rather than defend his performance, Johns prefers to ask for a chance to do even better with a fight against Gallagher in February when Bellator is scheduled to return to Ireland again.

“I’m not happy with the performance,” Johns said. “I get it. I’m in the same boat as you guys. They’re not the fights I want to put on for people. It’s just the last two fights have been unfortunate.

“Going back to my initial fight with [Danny] Sabatello, he did the same sort of thing to me in that fight. Obviously, I felt like the last four fights have been bad draws for me so I need to pick it up and do something about it.”

According to Johns, he heard about Bellator’s complaints through his manager but he holds no ill will towards the promotion whatsoever.

In fact, Johns praises Bellator for the way he’s been treated after signing with the organization as a free agent following a seven-fight win with the UFC where he put together an impressive 5-2 resume.

“I don’t know specifically what they said to [my manager] Brian [Butler] but for Brian to contact me on my holiday, they must have said something that obviously he felt was urgent to tell me,” Johns said. “I just don’t think they’re happy. I love this promotion. Bellator has been brilliant to me so that’s why it was a little bit like OK, I guess I’ve got to start moving. I’ve got to do something about this. The last thing I want to do is piss off the bosses.

“I want to have a good relationship with these guys and not only am I happy being here at Bellator, I’ll come out and say it — I’d be happy to finish my career here. I’d be happy to go through these fights over and over again with Bellator and have my last fight with Bellator. That’s what I want. So to hear from the main bosses that they’re not happy with my performances, I’ve got to do something about that.”

Considering he was already booked with Gallagher previously, Johns doesn’t see why Bellator wouldn’t give him the fight again but he’s also happy to raise the stakes to prove his worth to the promotion.

“Look, I’ve been in with the best guys in the world and I’ve still got to look at him above me in the rankings. That doesn’t make sense to me,” Johns said. “That’s why James Gallagher is the fight and that’s why I want that fight. It’s quite simple. I’ve got nothing but good things to say about the nation of Ireland. It’s nothing even personal against James. It’s me personally, I need to beat somebody like that. He’s higher than me in the rankings and that’s what I want. I want the number next to his name.