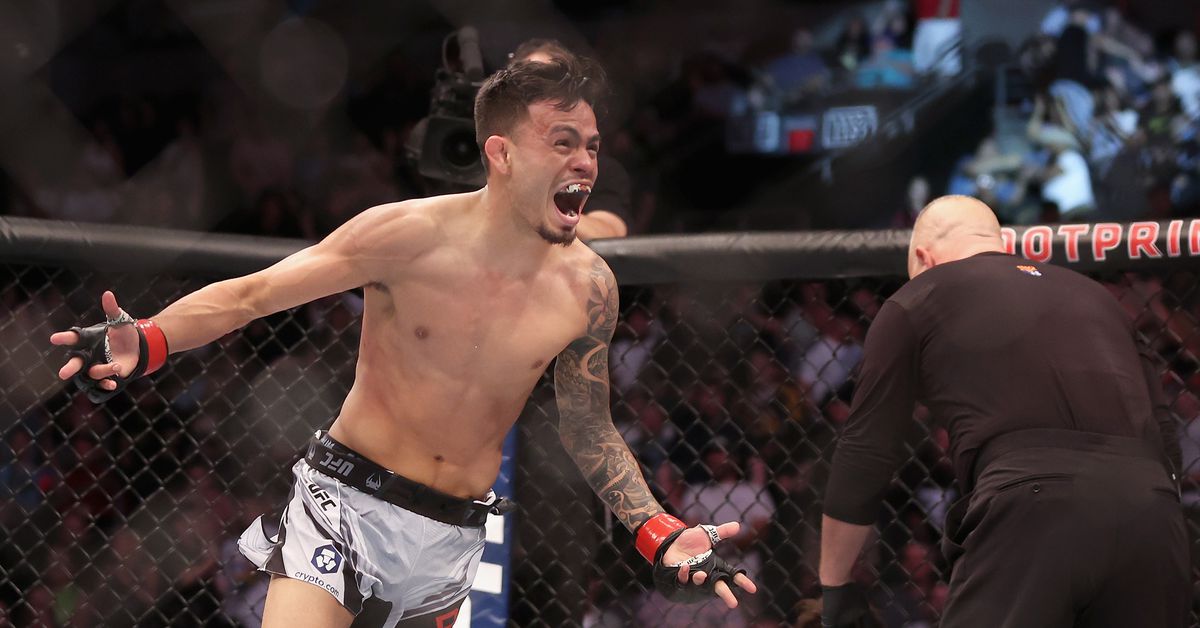 Brandon Royval wants to make himself “undeniable” in the flyweight title conversation.

On Saturday, Royval faces Askar Askarov in a featured flyweight bout at UFC Vegas 62. Askarov and Royval currently hold the No. 4 and No. 5 spots in the UFC flyweight rankings, and with Deiveson Figueiredo and Brandon Moreno set to unify flyweight titles at UFC 283, Royval plans on delivering a performance that will earn him a No. 1 contender matchup against Alexandre Pantoja on the same card.

Pantoja already holds a win over Royval, submitting him in August of this past year, and as Royval noted, he is already set to serve as the backup for the flyweight title fight in Brazil. However, Royval believes that a win over Askarov, who holds a unanimous decision win over Pantoja, would tip the MMA math in his favor, getting him his rematch.

“It’s not something I asked for but it’s one of those things,” Royval said. “Askarov beat Pantoja, if I go out there and finish Askarov, it kind of cancels out my loss to Pantoja, and that’s the only loss I really have in the UFC right now. So I can go out there and get that done, [but] maybe it’s a wishful thought.”

It may be a pipe dream, and if it isn’t, it’s certainly an unfortunate turn for Pantoja. The No. 2-ranked flyweight is riding a three-fight winning streak and many felt he deserved the next shot at the belt, but a logjam at the top of the division has left him odd man out for the time being. Making Pantoja fight again would be a tough turn for him, and even though Royval agrees, he’s still trying to make it happen.

“I would’ve preferred if they went Pantoja, and if they’d have gone with Pantoja that would have given me an opportunity to fight Moreno. I don’t think the interim title shot made sense to me at all,” Royval said. “I don’t know why there was an interim title, Deiveson wasn’t gone that long. Pantoja definitely earned his stripes beating myself, Kai Kara-France, and Moreno twice. So I don’t necessarily get it but whatever, I’m just going to try and get myself in position to be there.”

Of course all of this is predicated on Royval beating Askarov, which is by no means a guarantee. Askarov is currently a -245 betting favorite (implying a win probability of 71 percent) and he has an impressive career record of 14-1-1, including wins over Pantoja, Tim Elliott, and Joseph Benavidez. Beating him will be a tall task, but as with the flyweight title picture, Royval has plan.

“Kai Kara-France was able to push a high pace and able to kind of gas him out a little bit, and when I fought Kai Kara-France, one of the things that I was able to do was put a high pace and overwhelm him in a sense too,” Royval said. “There’s this racer, Steve Prefontaine, and I think that’s been a little bit of my motivation this fight. Steve Prefontaine was known to put on a massive pace and kind of take on the fight as a racer, and that’s what’s been going on in my head. I want him to hurt, and I want him to hurt in the sense that one, I’m beating him up, but also in the sense that I’m hurting. I want my lungs to be gassed out, I want to push myself beyond my limits, and I want him to feel that too. And if I feel like if I’m feeling it, I know he’s feeling it too, and that’s when I think I can take over the fight. Put a Prefontaine pace on him and make it dirty and try to take the win from there.”