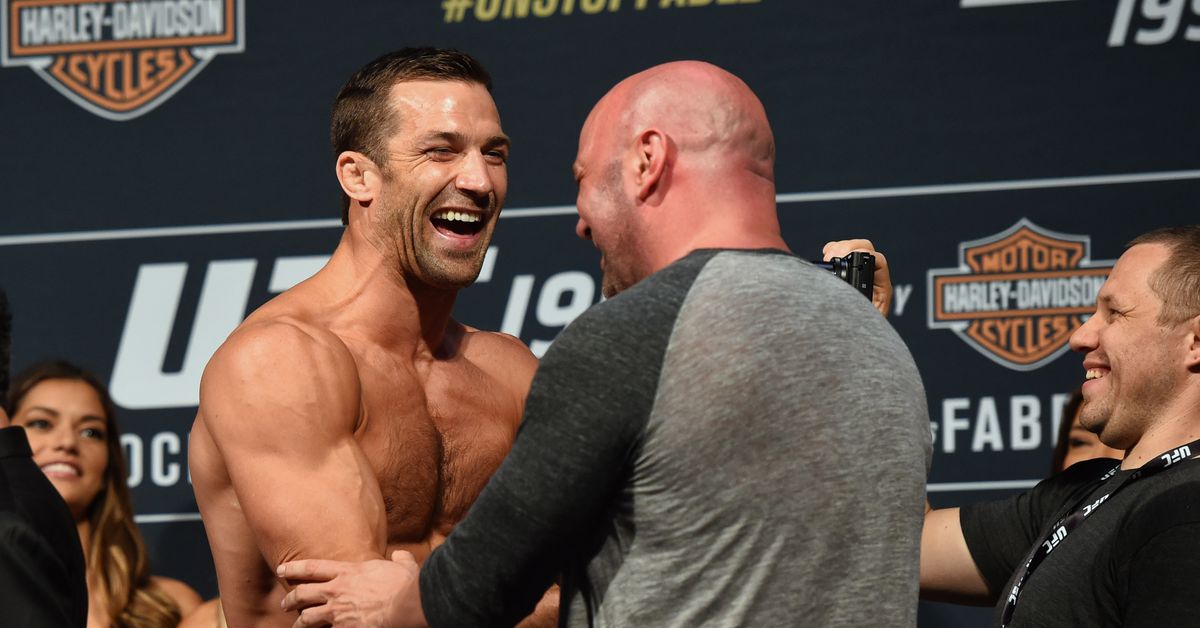 Luke Rockhold ended his MMA career with a bang in and out of the octagon.

Blood was shed at UFC 278, and in the co-main event, Rockhold made sure Paulo Costa left with a reminder of what they’d gone through. Costa defeated Rockhold via a hard-fought unanimous decision in the end, earning fight of the night honors in the process.

The fight was a wild and entertaining affair that gained newfound respect from many in the MMA community for the former UFC middleweight champion. A lot of the fight week buzz generated by Rockhold, however, was centered around external issues that were presented. Rockhold highlighted fighter pay issues and even targeted UFC President Dana White for disrespecting him throughout his career.

After Rockhold’s final fight, White openly expressed how he’ll “never say anything” bad about the 37-year-old and that he “totally respects” him.

“It definitely felt good to get that respect I felt I always deserved, but I guess you’ve got to get dirty and nasty sometimes to show people who the f*** you are,” Rockhold told MMA Junkie. “People want to assume I’m this, people want to assume I’m that. I’m sure the Polo [modeling] deal didn’t help — people just hated me even more. But that was the thing with Dana in the first place. He disrespected me when I lost the title and said, ‘You ain’t s***. You weren’t this, you weren’t that.’ I’m like, ‘F*** you, dude. I’ll go make my money elsewhere.’

“He’s like, ‘F***, fine, go do it,’ and guess what? I became the face of Polo Ralph Lauren, I had a worldwide commercial, I had [my face in] every airport in the world, and then Dana and the UFC were like, ‘Oh, can we give you this? Can we give you that?’ I did it so I could have leverage and respect. That’s why I did that. That was the whole point of that situation, and I got some back. But then I got a lot of disrespect from it because the whole world is just naive and they paint the picture for what they want the world to believe.”

Rockhold has continued to stay in the gym and be active with his training since retirement. As history has shown, MMA retirements truly never seem to last and Rockhold has already teased recently how an Alex Pereira title win at UFC 281 next month could lure him back. Time will tell if the underrated middleweight staple is actually done for good.

Explanation. Uriah Hall reveals why he returned for boxing match after retiring from MMA, addresses pay compared to UFC

Struggle. Aspen Ladd describes ‘roasting’ her body during weight cut that led to UFC release: ‘This was the last straw’

Zuck. UFC partners with Meta for live and on-demand events in VR on Fight Pass

Comeback. T.J. Dillashaw looks to claim ‘135-pound GOAT status’ after having ‘never lost my belt in this weight class’

Between the Links with Grant Dawson.

Heck of a Morning. MMA Fighting’s Mike Heck discusses who Henry Cejudo should face in his UFC return fight, and Khabib’s confidence in Islam Makhachev.

Can’t deny it wouldn’t be another classic.

Every morning this week I’ve spilled coffee on myself as I’m walking out the door late to everything or covered on coffee. Been a great week lol

It ain’t much, but it’s honest work.

The price you gotta pay.

We all did, Brendan.

A man of culture.

Yeah let’s talk about this @dc_mma ! Tell me why you got your trilogy with @stipemiocic right after he TKO you in the rematch ?!

There’s only one Luke Rockhold.

Happy Friday, gang, Have a great weekend and thanks for reading!