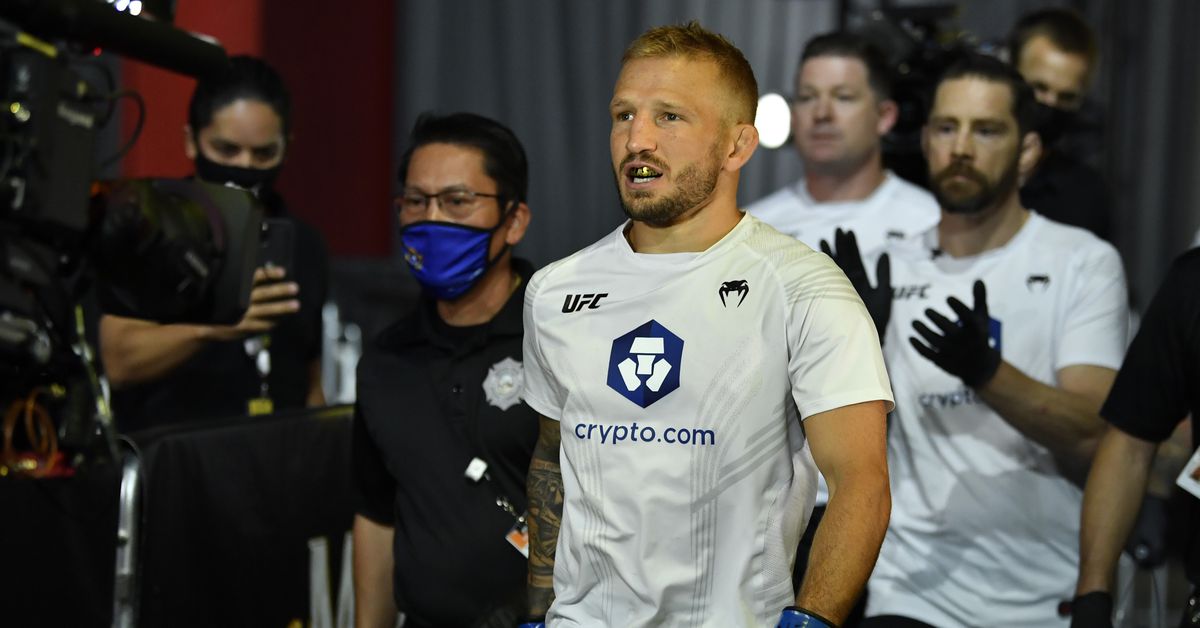 T.J. Dillashaw is very confident Aljamain Sterling’s reign atop the bantamweight division will be a short one.

Dillashaw, a former two-time bantamweight champion, looks to capture the title for a third time when he challenges Sterling in the co-main event of UFC 280, which takes place Saturday at Etihad Arena in Abu Dhabi. With a monster bout between Charles Oliveira and Islam Makhachev for the vacant lightweight title headlining the event, and an intriguing 135-pound bout between Petr Yan and Sean O’Malley preceding his fight, Dillashaw gave his thoughts as to why his bout with Sterling might be flying under the radar.

“I’m not a guy who is going to live my life on social media, I’m not the guy that’s going to comment back to things or get into that kind of stuff, I never have been,” Dillashaw told MMA Fighting while promoting a partnership with DeleteMe, a company that advocates for the importance of online privacy. “Maybe that’s a detriment for building up some steam to things, but it’s also because this champion that I’m fighting is very boring. He’s a very boring champion [because] of his fighting style.

“I’ve given people a reason to hate on me, but the reason why people hate him is because he’s just a douchebag and is a boring fighter. Maybe that’s why it’s flown under the radar. He’s never been in those drag-out wars that you see Oliveira getting into to become a champion and continue to prove himself, or had some of the fights that I’ve been in through the title fights, some of the title defenses I’ve been through, and the records that I hold for knockouts. So I’m looking to clean this boring champion out and [go on a] run of serious knockouts in the bantamweight division.”

Sterling successfully defended his title against Yan in the co-main event of April’s UFC 273 fight card, which Dillashaw watched cageside.

While Dillashaw says Sterling might be a “boring” stylistic competitor, he would be wrong to say Sterling wasn’t effective in that bout.

“I was impressed, don’t get me wrong,” Dillashaw said. “When people talk how we’re equally matched up in the fight — and look, I highly believe I’m going to run through Sterling, but I’d be an idiot not to look at his strengths and what he actually holds. He put the fight into his game and I was impressed with him being able to do that, because I really thought Yan was going to do to him what he did in the first fight, but it showed some big holes in Yan’s game as well.

“But Sterling shot 22 times, and the two takedowns that he got won him that fight, and also the fact that Yan is a slow starter and gave away Round 1. He always starts slow, getting your timing down before he turns on the gas, but those two takedowns won him the fight. I can tell you right now, he’s not going to be a backpack on my back. That’s something I haven’t shown too much of is my jiu-jitsu, because I’ve never needed to because I always want to knock someone out, but I’m going to have no problem out-grappling this guy.

“When you look at it on paper, people don’t understand how much I actually have the wrestling and jiu-jitsu in my back pocket.”

UFC 280 will be Dillashaw’s second octagon appearance since returning from a two-year USADA suspension for a prohibited substance stemming from his loss to Henry Cejudo in January 2019 in his bid to become a two-division champion, which led to Dillshaw being forced to vacate the bantamweight title.

In his return bout, Dillashaw earned a split decision win over Cory Sandhagen, but it was a win that came at a price, as he suffered a knee injury early in the bout that required surgery and has kept him out of action for 15 months.

Sterling has continued to bring up Dillashaw’s past, including telling MMA Fighting recently that he’s “made peace” with the chance Dillashaw will be “souped up”– using performance-enhancers, in other words – for the fight.

But Dillashaw doesn’t take that kind of talk too seriously, as he believes Sterling is just preparing for the inevitable.

“But it’s hard to like the guy. And he probably isn’t that bad of a guy, he’s just trying too hard. He might be, I don’t know, a bit insecure. He should be because he’s fighting me and I’m going to f****** run through him, so he’s going to be a little insecure with that. He’s going to be on top for just this one fight. The way he got the belt was pathetic. Yeah, he defended it, but that’s going to be his only real win on top.

“It is what it is, man. I just got to get out there, get the work done, and continue building up records. I want to continue to get the most finishes in this division. You’ve got guys like [Marlon] ‘Chito’ Vera that are knocking everyone out left and right, so I need to get some finishes, and I need to f****** fight more often than a year apart with these injuries.”

It’s hard for Dillashaw to put into words what regaining the bantamweight title will mean to him on Saturday, but he plans on getting some things off his chest once the job is done.

As far as what the headlines will read following the fight, Dillashaw is keeping things simple.