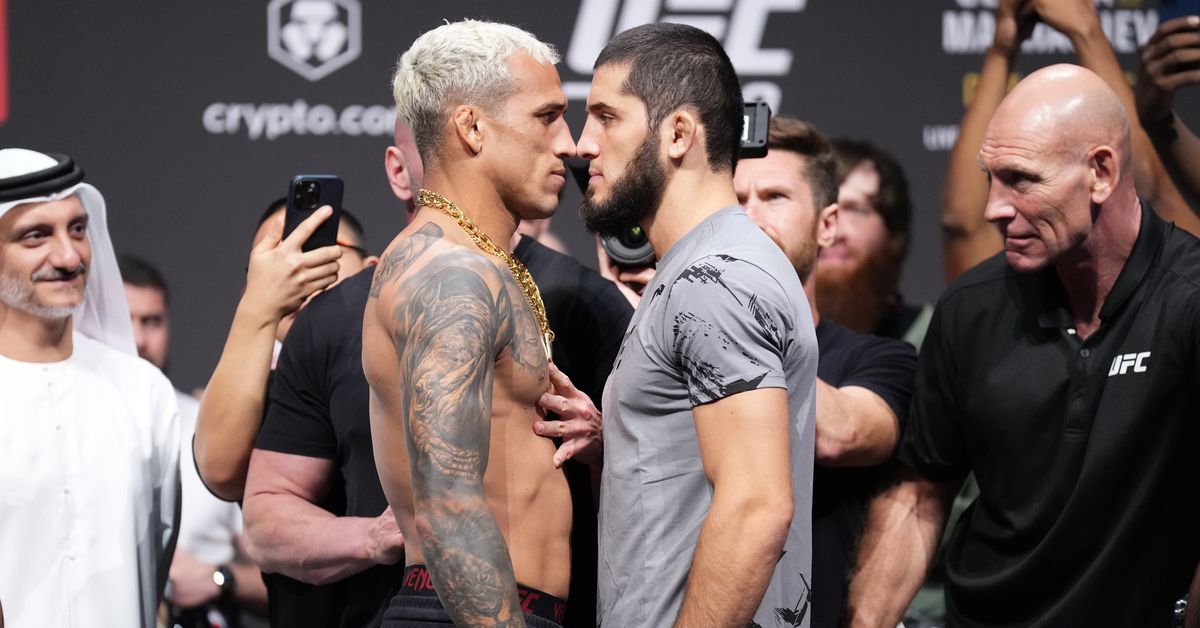 Charles Oliveira is primed to get his belt back it appears.

The former UFC lightweight champion had a strong parting message for Islam Makhachev and the lightweight division at UFC 280 ceremonial weigh-ins in Abu Dhabi on Friday.

“The lion of the lightweights is still roaring,” Oliveira said via a translation by MMA Fighting’s Guilherme Cruz.

Oliveira was stripped of his UFC crown after failing to make weight at UFC 274. He still defeated Justin Gaethje at the event and has won 11 straight fights.

His opponent, Islam Makhachev, who has won 10 straight fights, was clearly the fan favorite at the UFC 280 ceremonial weigh-ins.

“Abu Dhabi, give some noise. We do this tomorrow night inshallah, “ Makhachev said.

Meanwhile, in the co-main event, UFC bantamweight champion Aljamain Sterling and T.J. Dillashaw had plenty to say to each other during their heated staredown and afterwards with the UFC’s Jon Anik.

“I’m f***ing excited to fight in this arena. Come all the way across the world and put on a show. Show the f*** off for you guys and put this motherf***er to sleep,” Dillashaw said.

“Abu Dhabi thank you guys for coming out. This is a stacked card and you guys are in for a great show. I’d like to thank everybody on this card for being great needle movers for this event. Tomorrow night you guys are in for a good show. I’m going to put this motherf***er down and going to beat the piss pound sh*t out of him. Guaranteed,” Sterling said.

Conor McGregor fires back at retired Khabib Nurmagomedov: ‘Your fear of defeat means you’ve already lost’
Erin Blanchfield Names Last Box To Tick Before Being Title-Shot Ready
This is not the last we have seen of Israel Adesanya 👊
Best bets for the six $1 million PFL title fights
Khamzat Chimaev calls out Alex Pereira for December match in Brazil: ‘I already signed’