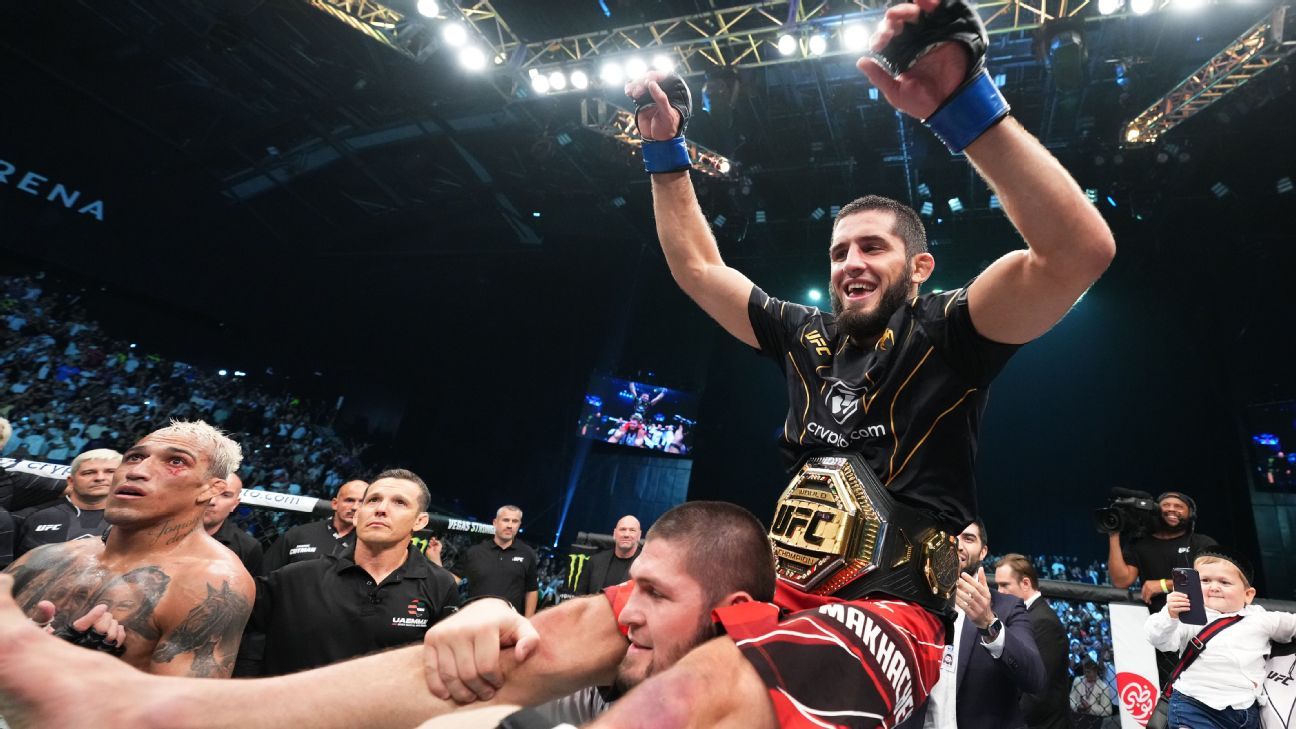 “Father’s plan” worked. Islam Makhachev is the new lightweight champion after defeating Charles Oliveria by second-round submission (arm triangle) to win the vacant belt at UFC 280 in Abu Dhabi, United Arab Emirates, on Saturday. Makhachev entered the fight on a 10-fight winning streak and was set to finalize the plan of his coach and longtime teammate Khabib Nurmagomedov, the former UFC lightweight champion: To win the belt.

For Oliveira, who lost the belt on the scales back in May, this was his first defeat in 11 fights.

Earlier on the card, the bantamweight division took center stage. Champion Aljamain Sterling dominated TJ Dillashaw with a TKO victory, while Sean O’Malley escaped with a split decision over Petr Yan. Should the winners fight each other? And how about the losers? A fight between either pair would be must-see.

So what should come next? Let’s take a look at what fights could be ahead in 2023.

Who should be next: Alexander Volkanovski

Well, Makhachev, Nurmagomedov, Volkanovski and the UFC made this one pretty easy. Everything is lined up. Makhachev gets to defend his belt against the No. 1 pound-for-pound fighter in the world. And Volkanovski gets a shot at a second title — in his home country of Australia.

Send the contracts. Print the fight posters. We’re going to Perth, Australia, on Feb. 12 for UFC 284 and this is the main event.

Dariush is so, so, so deserving of a title fight, but even he seems to know it isn’t in the cards — yet. There are just too many big fights ahead of him right now. One would think he’ll have to get his chance if he continues to win, but it won’t be right now.

Who should be next: Conor McGregor 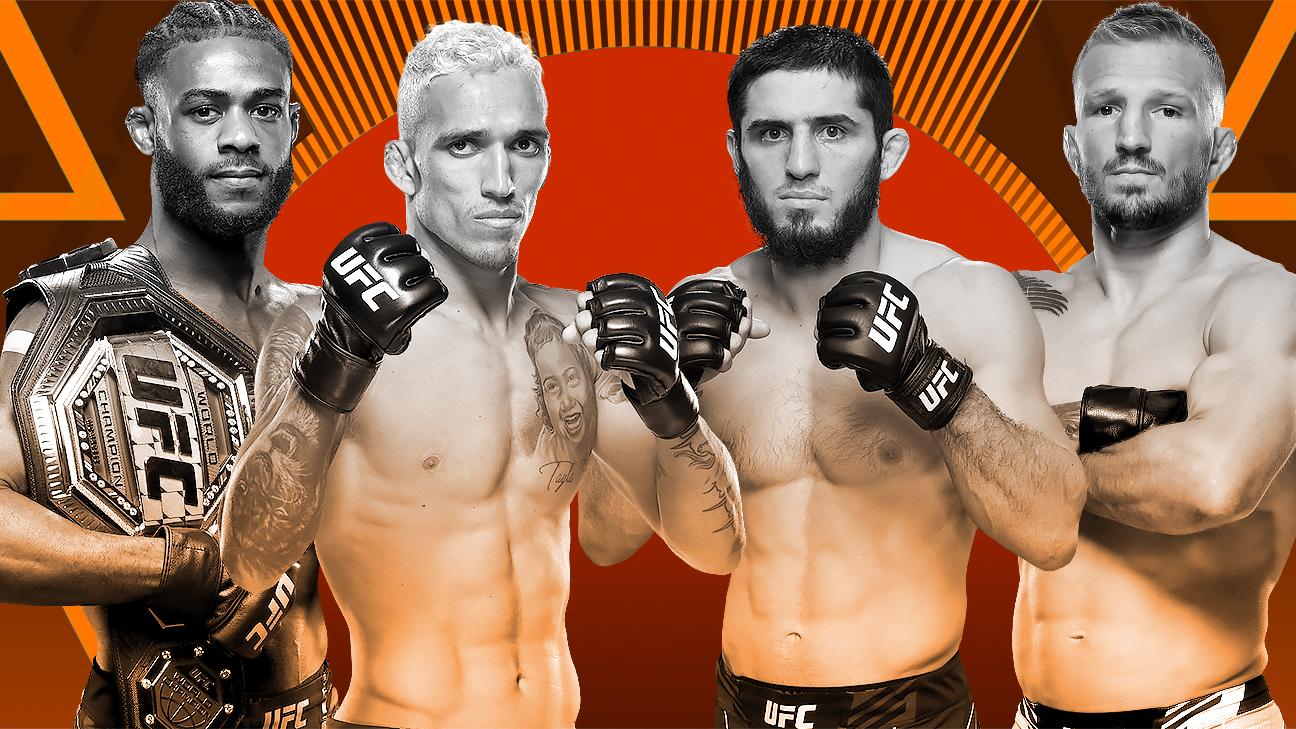 If the PPV is purchased, all fights from UFC 280: Oliveira vs. Makhachev will be available to watch on ESPN+.

Oliveira is a perfect foe for McGregor, if and when McGregor ever returns. He keeps saying he will, but it feels like we’re never any closer to him doing so.

If he does come back though, this is the one. Oliveira has arguably the most exciting style in the sport right now. He’s already beaten a lot of the obvious opponents you’d book him against next. He deserves the attention a megafight against McGregor would bring him. And I bet he’d even take the fight at 170 pounds, if that’s what McGregor demanded.

If Dariush doesn’t get a title shot, which doesn’t feel likely, this would be a big fight for him, and one Dariush deserves.

From a rankings standpoint, it makes perfect sense. Would love to see Oliveira in the biggest fight possible. This probably isn’t that, but it’s a quality, quality matchup.

What should be next: Sterling vs. O’Malley

UFC president Dana White said the two winners of these fights would square off, and there’s no reason to deviate from that after watching them play out.

Whether you agree with the scoring of O’Malley’s split decision over Yan or not, there’s no doubting he proved himself to be elite. He just beat the No. 1-ranked contender and a former champion. And Sterling feels even more like an undisputed champion now, getting the better of one of the best bantamweights of all time.

Convincingly. Sterling wants big fights, because big fights equal big money. O’Malley is instantly the biggest fight for him, and the rankings justify it. This should be the next title fight at 135 pounds.

This would feel out of place, and I don’t see it happening, but we still don’t know what is going to be next for Cejudo. He’s coming back and obviously wants a shot at the belt. Again, Sterling wants big fights, and this would be one that’s easy to sell. There would be a storyline behind it. Cejudo walked away a couple years ago as the champ, on a dominant run that included two divisions. He’s a character in this story, but it’s hard to see him getting a shot ahead of O’Malley.

What should be next: Dillashaw vs. Yan

You’ve got to feel a little bit for Yan. That’s back-to-back fights that plenty of observers believed he won. Sometimes, the margins in this sport can be cruel. The difference between two massive wins and two stinging losses comes down to fine details.

Yan is still considered one of the best, as is Dillashaw. Stylistically, this is a sick fight. Both of these guys hit hard, incorporate kicks, switch stances. It’s a Fight-of-the-Night candidate on paper, and the obvious next move for both, depending how Dillashaw’s health is coming off what appeared to be yet another shoulder injury.

What should be next: wait

Wait for what? I’m honestly not sure. Something to open up. Right now, you’re looking at Leon Edwards vs. Kamaru Usman III next. And the UFC is going to try to book Khamzat Chimaev against Colby Covington. That only leaves Gilbert Burns as far as a welterweight ranked higher than Muhammad, but the UFC wants to book Burns against Jorge Masvidal.

The only answer is to wait. He’s officially unbeaten in his past eight contests so, if Muhammad refuses to fight anyone else, you can’t blame him. Maybe Covington refuses to fight Chimaev. Maybe Masvidal refuses to fight Burns. My guess is Muhammad will be in no rush to book any other fight and let those scenarios play out.

Rakhmonov is looking a little like a boogeyman at 170 pounds, and Neal is back on track with two consecutive wins after suffering a pair of losses. Whoever wins this fight on Jan. 14 will be looking up the rankings, and Muhammad will make for an obvious target.

If all of the names ahead of Muhammad are booked, don’t be surprised if the UFC asks Muhammad to stay active and accept a fight against one of these two. We’ll have to see where things stand by Jan. 14, but this figures to be a real option for Muhammad come early 2023.