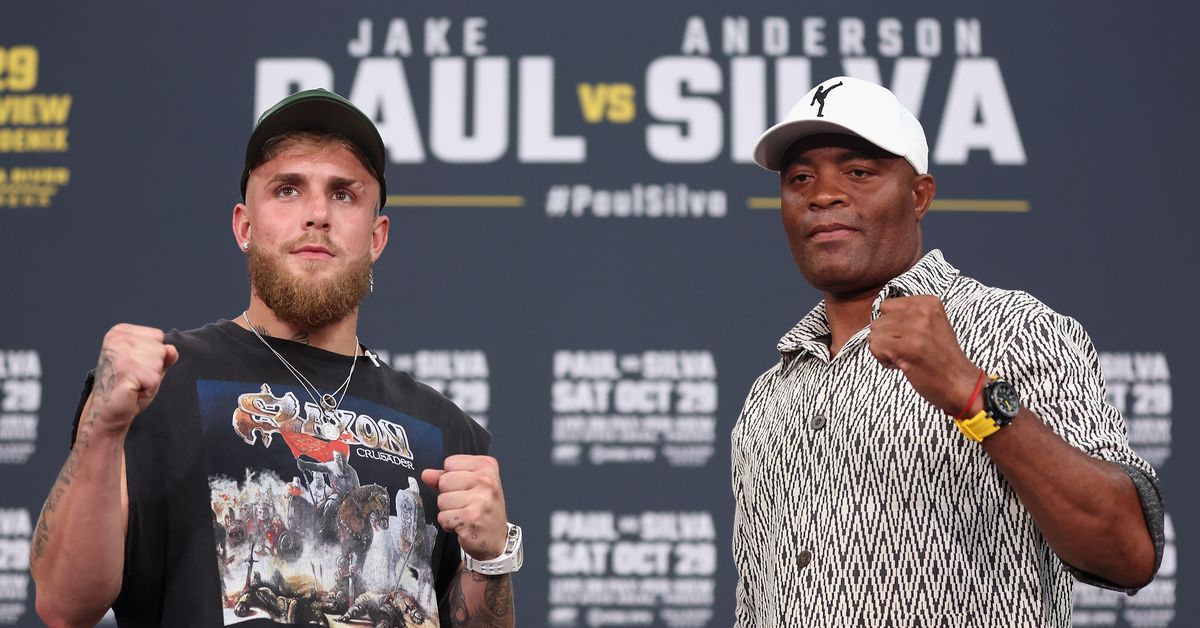 It’s no secret Jake Paul and Dana White aren’t best of friends. But now the brash boxing sensation claims that the UFC president is actively trying to hurt his upcoming pay-per-view card where he faces Anderson Silva in the main event.

In a message posted to Twitter, Paul stated White was “ doing everything he can to hurt the Anderson Silva PPV promotion,” adding the UFC exec’s actions show “how much he fears what I’m doing.” Paul didn’t add any additional context to his message but Showtime Sports president Stephen Espinoza understands why those claims were made.

Dana White is doing everything he can to hurt the Anderson Silva PPV promotion. The same Silva he said I would never fight. The same Silva he has kept out of UFC Hall of Fame. Just shows how much he fears what I’m doing. Trust me change is coming & we are getting organized.

“I think it’s a lot of little things, a lot of circumstantial things,” Espinoza said in an interview with MMA Fighting. “I didn’t watch the entire press conference [at UFC 280], but I didn’t see Dana asked about Jake during this last UFC event, this past weekend, which is unusual because he always gets asked [about Jake]. He may not answer, but he always [does get asked]. Obviously, I wasn’t there overseas at the event, but you wonder at that point it’s certainly a departure from what has happened in the past.

“My assumption would be — perhaps incorrect, perhaps correct — that everyone was instructed not to ask about it. I doubt it’s because no one is interested. When they asked about it event after event before this one, and then this one there are no questions on it.”

White previously has lashed out at repeated questions about Paul. In August, he declared he no longer wanted to talk about the YouTube star turned boxer.

Espinoza said that’s not the only evidence that the UFC president is hoping the upcoming pay-per-view broadcast doesn’t succeed. While not an egregious offense, he also revealed the UFC declined to allow Showtime to use any prior footage featuring Silva as part of their promotion for the fight against Paul.

“UFC hasn’t been cooperative in giving access to fight footage — usually that’s a courtesy that’s given without that much controversy,” Espinoza said. “Here we didn’t get that. It didn’t affect our promotion, it would have been nice to be able use some of his old fight footage. I’m sure Anderson would have appreciated being able to get access to his old fights.

“It wasn’t a big thing. I think it was a series of little things and a series of comments over weeks and months that made it very clear that they’re hoping that this does not succeed.”

As part of his ongoing war of words with White over the past couple of years, Paul has consistently criticized the UFC for underpaying fighters and handing out a lower percentage of revenue to athletes than almost any other major sports league in the world.

Paul has also been adamant about starting a fighters’ union to help MMA fighters combine efforts to battle for better overall benefits, which includes pay as well as health insurance.

It all adds up to Paul using his reach to potentially threaten the UFC’s bottom line, and that’s why Espinoza believes he really has gotten under White’s skin.

“I think [the UFC is] uncomfortable whenever someone brings up the issue of fighter pay,” Espinoza said. “They’re very defensive. There are issues there to look at. The structure and the treatment, a lot of what Jake says has a lot of merit.

“But I also think that there’s a threat in what Jake is doing in the entrepreneurial sense. Yes, he’s aligned with Showtime now, he’s been aligned with other platforms before but he is literally taking his business, his life’s dream and he’s partnered with us of course we’re helping monetize that but at a certain point, he is going out and finding his own opponents. He is doing a lot of the marketing himself. He is proving at a certain point with enough of a fan base, you can go on your own. You can be entrepreneurial. You don’t have to be with a huge promotion throughout your career and I think that is a threat to the established order of combat sports.”

When it comes to the actual attention that the Paul vs. Silva card is earning just days ahead of the card on Saturday, Espinoza said all signs are pointing toward a huge result. Ticket sales have already made Silva vs. Paul the most successful boxing event ever held at the Desert Diamond Arena, he said, with the card sitting behind only UFC 263 as the highest grossing even to take place at the arena in Glendale, Ariz.

“From every metric that we’re seeing, and we’ve got a few, this is on track to be Jake’s largest fight,” Espinoza said. “Now I say that with the qualification obviously that it’s unlikely to be as big as [Mike] Tyson vs. [Roy] Jones Jr., which is where Jake’s fight [against Nate Robinson] was initially under but Jake’s main event fights, this is definitely on track to be the biggest one.

“Part of that obviously is Anderson Silva’s marketability and the recognition part of that is the risk. I think the biggest draw is really the intrigue. No one’s sure exactly how this one is going to go. There’s literally no result in this fight that would surprise me. A KO either way, a close decision either way, I would not be surprised. Everything’s on the table.”

‘Perth is a long way to travel to get beaten up,’ but Jack Della Maddalena hopes someone willing to at UFC 284
UFC 281 Embedded: Vlog Series – Episode 6
Sean Strickland Gives Update On Twitter Ban After Elon Musk Purchase
Charles Johnson on Zhalgas Zhumagulov win at UFC Fight Night 215: ‘I felt like I won every round’
‘Artem Is A Rat!’