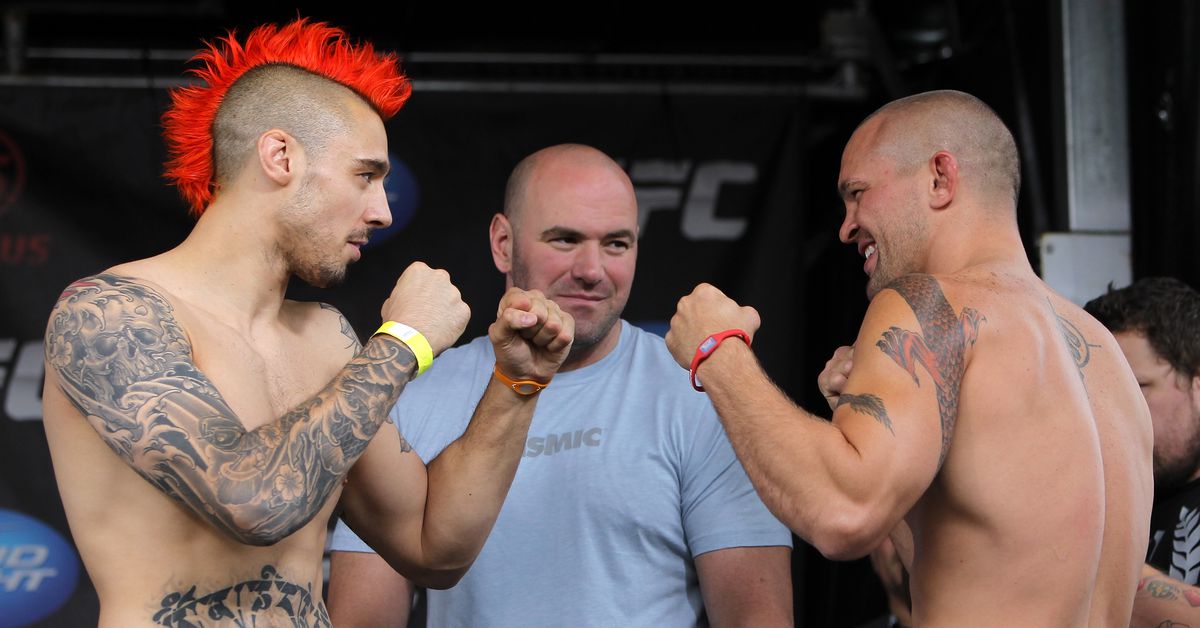 The former Ultimate Fighting Championship (UFC) Welterweight and commentator was released from the promotion in May 2021 after an alleged incident with a female employee. Since then, Hardy has continued to stick around the mixed martial arts (MMA) scene, breaking down fights and podcasting.

After sharing his thoughts believing that UFC and President, Dana White, staged a backstage scene following the one-sided Max Holloway versus Calvin Kattar bout (watch highlights), Hardy caught some backlash from White himself this past weekend. White called “The Outlaw” bitter due to his release from the company and stated that he mistreated a female employee, leading to the decision being made. Hardy has been quick to deny the claims.

“You can say what you like at the press conference,” Hardy said on his YouTube channel (h/t MMA Fighting). “I don’t care. I don’t give a f—k what you think either, Dana. I don’t, honestly. I did once, and there are a lot of fighters out there that do give a f—k what you think, but they give a f—k what you think because you’re in control. They wouldn’t look at you on the street if you weren’t in control of the UFC, and certainly not the way you treat people. Jesus. People will wake up one day, they’ll wake up — slowly, people are doing it. And if you have enough thorns in your side, eventually you’re going to bleed out. Don’t ever forget that.

“‘I know what we’ll do. We love our athletes, we care about them so much, let’s start a f—king slap fight league. Let’s trade concussions for cash,’” he joked. “I mean, come on. And you’re going to advertise that to me while I’m trying to watch MMA, while I’m trying to watch my sport? Come on. Say one thing, do another. Say one thing, talk some s—t, do another. It’s the same pattern, over and over again.”

Hardy spent 13 years under UFC’s umbrella, starting as a fighter in Oct. 2008. It wasn’t until around the time of his departure that opinions started to clash.

Now that he’s free from the corporate machine, however, Hardy sees no reason not to speak out when he knows others would if they could.

“There’s a lot of bulls—t in this sport, a lot of bulls—t in this industry,” Hardy said. “Unfortunately, corporation has taken over, and I am not a corporation person. I’m an MMA nerd that sits in my room and researches. I don’t do all the schmoozing and Prosecco drinking. I can’t f—king stand it. So my relationship to the UFC and anything else is irrelevant to me, because I’ve rediscovered my love of martial arts. After going through this mire of f—king nonsense, I’ve arrived at this point when I realized that this is where I’m supposed to be.

“There are people in there that I hope and trust would be able to stand up and say the right thing, and constantly, they f—king let me down,” he continued. “Constantly, I see people that should be speaking up and saying, ‘Hang on a minute, that’s not right, that scale didn’t settle. Who are you? You work for the organization, you shouldn’t even be touching the scales.’ I see constantly this nonsense, these shenanigans, this f—king, and there’s no reason why I can’t tell you about it anymore.”

During his time as a fighter, Hardy wasn’t much of a “trash talker,” but he spoke with confidence aplenty. Openly admitting that, Hardy just can’t get over the mislabeling he’s being dealt by his former boss.

“So you ask me if I’m bitter, yeah, I’m probably a little bit bitter, but ultimately what I wanted to do is let you guys know that I see the game that’s been played,” he continued. “Mistreating a woman? Unbelievable. It was a colleague of mine that I had known and had been working with as a fighter and as an ambassador for the UFC for probably 12, 15 years.”

MMA Twitter Reacts To Larissa Pacheco Upsetting Kayla Harrison
Sources: Coach not allowed in corner amid probe
Robert Whittaker on Alex Pereira – “Who let this guy in?” 😳
Charles Johnson on Zhalgas Zhumagulov win at UFC Fight Night 215: ‘I felt like I won every round’
Bookie Shades Blaydes, Backs ‘Bones’