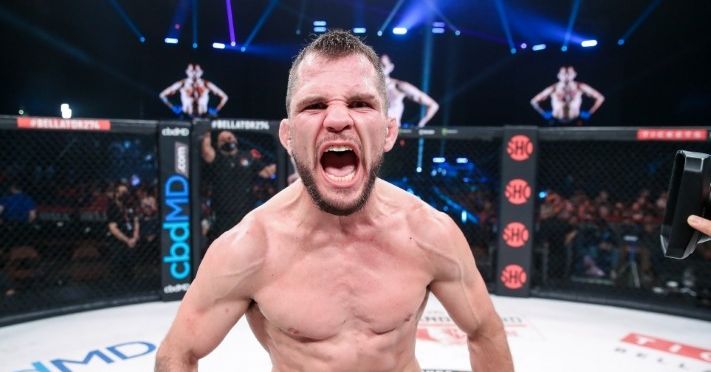 Bellator is set to return on Saturday (Oct. 29, 2022) to stage Bellator 287, a special mid-day event that will feature a Lightweight scrap between Adam Piccolotti and Mansour Barnaoui. Co-headlining the event will be a Middleweight scrap between Fabian Edwards and Charlie Ward.

MMAmania.com will deliver coverage of Bellator 287 on Showtime right here.

It’s not exactly a fight that will make you jump out of your seat, but it will mark the promotional debut of Barnaoui, the former ROAD FC Lightweight champion of the world. He holds a seven-fight win streak and hasn’t tasted defeat in over six years. He has finished all of his opponents during his hot streak, five of them in the very first round with five submissions and two knockouts. He has great standup but his jiu-jitsu is a bit better overall. While Barnaoui may not be a name your may be familiar with, he has a ton of experience, and even competed against current Ultimate Fighting Championship (UFC) Lightweight champion, Islam Makhachev, losing to him via unanimous decision under the M-1 banner. In fact, three of his four losses have come against current or former UFC veterans, including Kevin Lee and Mateusz Gamrot. Piccolotti, meanwhile, has been a bit inconsistent over the last six years, going 5-4 under the Bellator banner. He is coming off a win over Georgi Karakhanyan, so he is trying to build off that momentum. But it won’t be happening this time around. Barnaoui is eager to make a splash in his debut and has been on a tear for some time now. My only concern is that he hasn’t competed in three years, but I don’t think ring rust will be a factor here.

I’ll admit that I scratched my head at this booking. Edwards is currently ranked No. 2 in the Middleweight division, so why he is fighting someone not ranked is a bit confusing. He recently snapped his two-fight losing streak by defeating Lyoto Machida this past May, which saved him from taking a deep dive in the standings. As for Ward, he is on a three-fight win streak and 7-1 in his last eight fights. Ward has a two-year stretch from 2017 to 2019 where he was knocking out everything in his path to the tune of four straight violent stoppage wins. And it it’s a standup battle he is looking for, he will get that with Edwards, who isn’t shy in letting his fists fly. But Edwards is a bit more well-round because he possess some slick submission moves as well as great wrestling. And that will be the deciding factor here, the more-well rounded attack that will cause Ward problems all night long. He has a punchers chance but Edwards has yet-to-be finished in his career.

In further 155-pound action, Rogers and Wilde will collided in a battle of two un-ranked foes trying to scratch and claw their way to a spot. Rogers will be returning after a year-long layoff, with his last fight came at Bellator 266 against Georgi Karakhanyan, defeating him via unanimous decision. But in what seems to be a reoccurring theme with this fight card, Rogers can’t get enough wins in a consistent manner, going 3-3 since 2017. Wilde has been doing a bit better, however, as he is 5-1-1 in his last seven fights and is 2-1-1 with Bellator. Neither of these two men will be confused as standup specialists, but they do just enough everywhere to present some problems to the opposition. Rogers does have nine submission wins to credit so his main objective is pretty clear here. Wilde has a bit more polished attack but he still has to be on the lookout if the fight goes to the ground.

In the Featherweight division, Justin Gonzalez and Andrew Fisher will collide in a fight that could steal the main card. Gonzalez has looked sharp throughout his career, with his lone loss coming at the hands of Aaron Pico. “J-Train” is an excellent wrestler, but his striking has improved after every fight. Fisher hasn’t tasted defeat in five years, going 5-0-1 in that span. Of his 19 wins, he has nine submissions so it’s no secret where he prefers to let the action play out. Still, Gonzalez has proven to be a formidable foe and future contender and a win over Fisher — which he will get — moves him one step closer to a ranking spot.

‘These Motherf—ers Don’t Give A F— About You’
Aspen Ladd: Resumes of Larissa Pacheco, Kayla Harrison are ‘absolutely nothing compared’ to mine
Manager: Henry Cejudo is fighting Aljamain Sterling next for the bantamweight title: ‘It’s a done deal’
Paddy Pimblett claims Jake Paul’s ‘fights are fixed,’ Paul responds with $1M challenge
Conor McGregor Unleashes On Iconic UFC Figure During Twitter Rampage