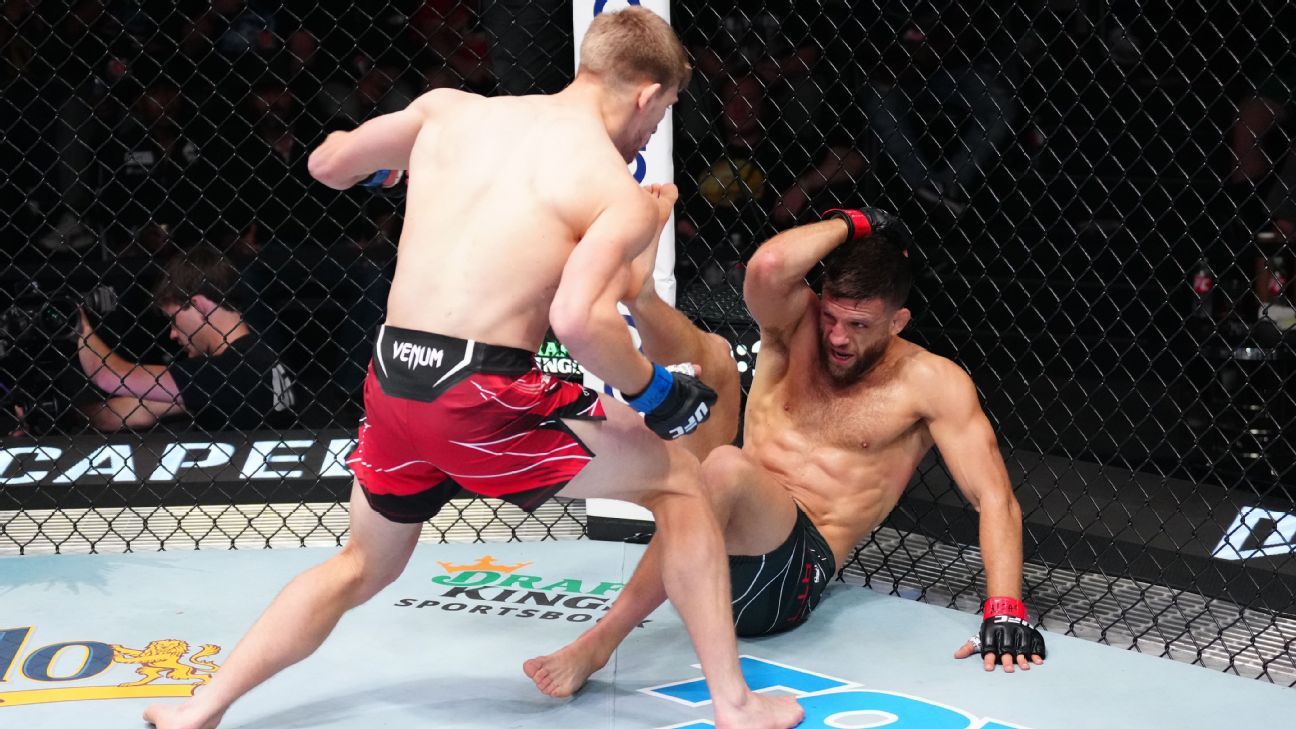 English featherweight Arnold Allen picked up the biggest win of his career on Saturday, although it didn’t come in a manner he wanted.

Allen (19-1) picked up his 10th consecutive UFC win inside the Apex in Las Vegas, defeating Calvin Kattar (23-7) via second-round TKO. The 145-pound contest, which headlined UFC Fight Night, extended Allen’s overall win streak to 12. He signed with the UFC in 2015 on a two-fight winning streak.

Allen, 28, looked fantastic in the opening round, but the finish was still an unfortunate one. In the first round, Kattar appeared to suffer an injury to his right leg when he landed awkwardly after a flying knee attempt. He came out for the second round, but quickly fell to the floor after Allen threw a leg kick.

Afterward, Allen noted that featherweight champ Alexander Volkanovski was looking for fighters “to make a statement.”

“That’s never a TKO by injury,” Allen said. “I can’t really ask for a title shot off this.”

The scene was reminiscent of another featherweight main event in July, when Yair Rodriguez defeated Brian Ortega by first-round TKO after Ortega suffered a dislocated shoulder. The result is a convoluted situation at the top of the division, with some of the top title challengers coming off somewhat unfortunate victories.

Still, Allen was clearly winning the fight at the time of the injury. He began to find a rhythm with his left hand midway through the first round and landed a hard combination of punches to the head and body up against the fence. His pace was measured and confident, despite it being his first main event appearance.

Kattar, of Massachusetts, responded with some lower leg kicks and his own right hand, but Allen still controlled the early exchanges. According to UFC Stats, he outlanded Kattar 22-14 in total strikes and connected on a higher percentage of his attempts.

Volkanovski (25-1), of Australia, has not booked his next featherweight title defense, although he’s expected to move up in weight to challenge newly crowned lightweight champion Islam Makhachev for a second belt in February. That potential 155-pound title fight, however, is not yet official.

If Volkanovski does move up, the UFC could opt to create an interim belt at 145 pounds in his absence. Allen called for that opportunity on Saturday. He would likely be a candidate for the opportunity, along with Rodriguez and Josh Emmett.