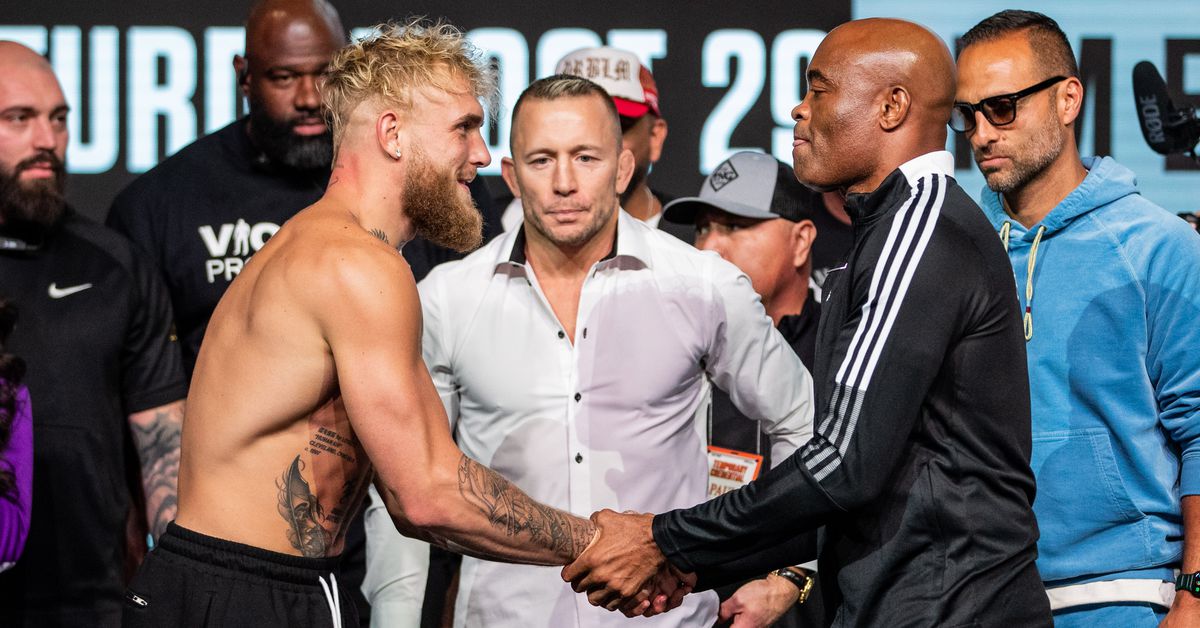 Count Georges St-Pierre among the many wowed by Jake Paul’s latest performance inside the ring.

Paul defeated former UFC middleweight champion Anderson Silva by unanimous decision on Saturday, improving to 6-0 and scoring the biggest win of his pro boxing career. “GSP” — a former UFC champion at both welterweight and middleweight — was working the analyst desk for the Showtime boxing pay-per-view at Desert Diamond Arena in Glendale, Ariz., and he had nothing but positive things to say about Paul’s victory.

“I’m extremely impressed by Jake Paul’s performance,” said St-Pierre, evoking one of his most famous catchphrases. “He showcased once again that he has improved by a lot since his last fight. He showcased a lot of discipline. He didn’t fall for Anderson Silva’s mind trick.

“He was not only a headhunter, he set up his head shots with a lot of good body shots as well, and he showcased a very efficient and compact defense. It was just an amazing performance.”

Throughout the eight-round contest, Paul showed both impressive power and a level of technique that likely surprised his detractors. “The Problem Child” consistently worked Silva’s body and landed power shots in the later rounds, while strategically employing the clinch to impede Silva’s offense.

St-Pierre believes the body work was key to Paul outpointing the MMA legend.

“I think it’s the fact that he set up his attacks with a lot of body shots,” St-Pierre said. “Because Anderson Silva is very fluid and very often when he historically used to fight guys and do his kind of mind trick, he tried to fight like he’s in The Matrix. Guys get angry and they become headhunters. Paul did not fall for it. He kept going to the body to set up his head punches, which was very smart.”

As for Silva, St-Pierre couldn’t help but be amazed at how “The Spider” performed in his 25th year of combat sports competition.

“You have to be impressed,” St-Pierre said. “Just for him to be here and step in the ring is just amazing. He’s a physical specimen. I don’t know a lot of guys at 47 years old who can do that kind of stuff.”

With the win, Paul adds Silva to a list of conquests that also includes former MMA champions Tyron Woodley and Ben Askren. The YouTuber-turned-boxer has fielded a diverse range of opponents, including other YouTube personalities, NBA veterans, and reality television stars.

It’s not clear what Paul’s next move is, though he called out both Nate Diaz and Canelo Alvarez in his post-fight interview.

St-Pierre thinks Paul would be wise to go back to the MMA well and fight Diaz, who recently parted ways with the UFC.

“I think that’s the fight to make,” he said. “Right now I think that’s the fight that the timing is perfect. Nate Diaz is free, Jake Paul wants it, Nate Diaz wants it, I think. There’s a beef between the two guys. Emotions are involved and fights are promoted through emotions. They’re not won through emotions, they’re won through mundane things that you do in everyday life. So it’s going to be very exciting to see what happens next.”