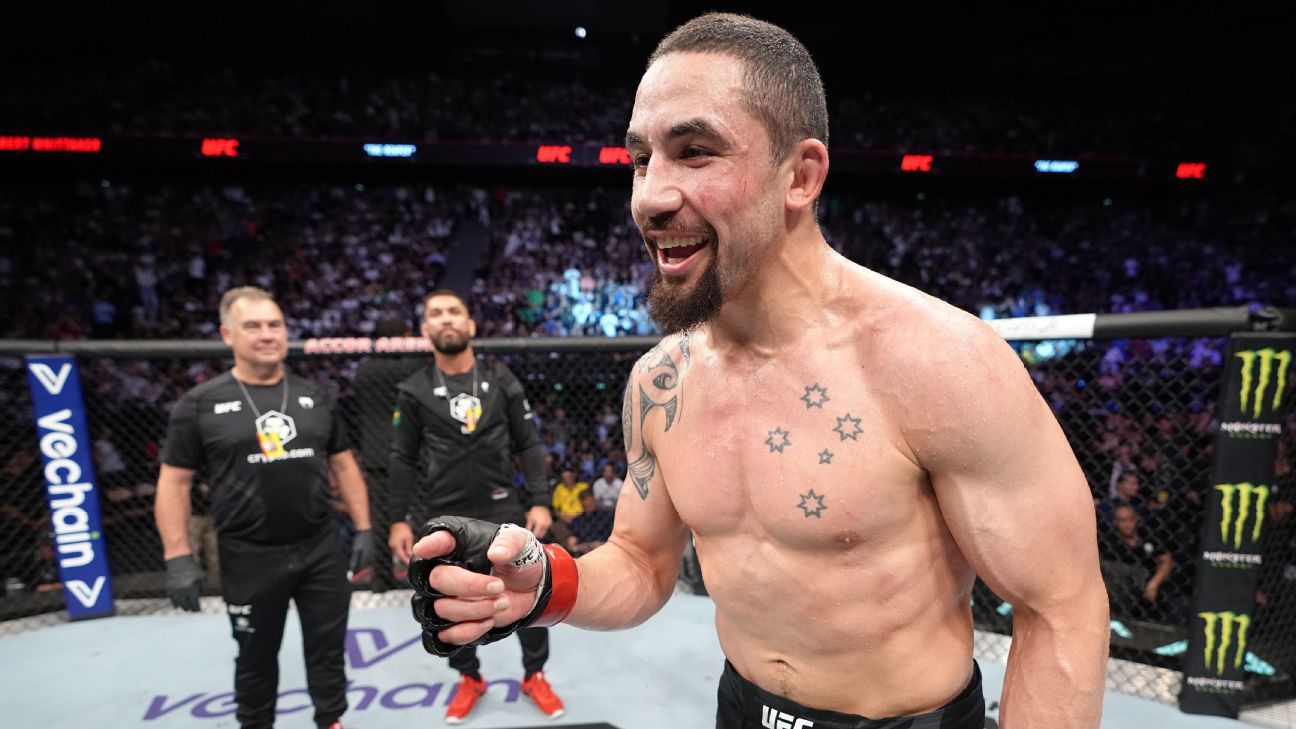 The reality that he is now one of the “old dogs” of the UFC might still be hitting home, but Australian Robert Whittaker [24-6] is thrilled to have the opportunity to right a previous wrong when he faces Paulo Costa [14-2] at UFC 284 in February next year.

Fresh off another dominant showing in his victory over Marvin Vettori in Paris, and some well-earned R&R thereafter, Whittaker, 31, is slowly turning his attention to his next bout and the chance to clean out another fighter near the top of the middleweight rankings.

While Whittaker has twice lost to champion Israel Adesanya, his list of victims at middleweight is otherwise a who’s who of the division; the Australian having dusted Darren Till, Jared Cannonier, Derek Brunson, Kelvin Gastelum and Yoel Romero in a UFC career that has just ticked over the 10-year marker.

But where the motivation to keep fronting up might be starting to wane for others, Whittaker is being driven by the opportunity to atone for his withdrawal from the UFC 221 event in Perth in 2018, so too the chance to again fight in front of an Australian crowd that has been starved of MMA action over the past three years.

“I was pretty determined to get on this card, because the opportunity to fight at home is something I always jump at,” Whittaker told ESPN. “Not to mention just the logistical nature of fighting at home; not having to leave as early, being able to take the whole family and having friends there, and especially my Australian fanbase come to the fight itself. So there’s that side of things.

“But I was supposed to fight in Perth once before and then I got the chicken pox and staph and couldn’t make it. So it’s a way for me to cross that off the list of things to make up for. And just timing wise, it’s still four months away so it’s the perfect amount of time for me to get back into training, to learn and perfect some new stuff, and make sure I give Costa a full camp.”

After seeing off Vettori via unanimous decision in Paris, Whittaker then played tourist, sampling some of the local French delights before he, wife Sofia, and their youngest child ventured across the channel to London.

After the strict dietary constraints of a fight camp, both cities left a lasting culinary impact.

“The French bread is next level, and I had an apple pie in Paris that ruined apple pies across the rest of the globe,” Whittaker said with a laugh. “I’ve been on a hunt now ever since, it’s like trying to look for the Holy Grail, and I just cannot find it anymore. So cheers for that Paris.

“But otherwise the curries in London are just next level, they’re so good.

“It was just the perfect amount of time for activities and time away from the industry and from the work side of things to avoid that burnout. Anyone can get burnt out no matter what they’re doing, so to have that time away from the game, and even when I came home I was still doing things that I had planned with the family and just relaxing and enjoying myself, taking things at a steady pace, and then I got back in the gym.”

After stepping away from the sport for a period after his loss to Adesanya at UFC 243, Whittaker has made a conscious effort to find the balance both inside and outside the Octagon. The proof is in the pudding, as they say, with only a second loss to Adesanya blotting his record since the Australian rethought his whole MMA approach.

So while others might see the 10-year marker as a time to be winding down, perhaps even edge towards retirement, Whittaker instead believes he is in the best space possible, even if the tag of UFC veteran still requires adjusting to.

“Honestly, I didn’t even realise that until the last fight when someone pointed it out to me, that this is the 10-year mark in the UFC, and this will be my 20th UFC fight,” Whittaker told ESPN. “I don’t know when it happened but I became a veteran at some point during the career.

“It’s a weird thing to suddenly realise I’m a veteran of the sport, I’m one of the old dogs now, I don’t think I’ve truly gotten a grip on that as a thing, but looking back I’m certainly proud of things that I’ve done, the tenure that I’ve had, the spotlight that I’ve brought on the sport, especially here at home.

Seen as a bit of a villain among the UFC ranks, Costa will also enter the fight in Perth on the back of a victory, ironically over Luke Rockhold whom Whittaker was slated to fight when the promotion last visited to Western Australia.

While steering clear of Costa’s social media antics, Whittaker is fully aware of the Brazilian’s fighting ability and will leave no stone unturned in his preparation for a fight that may well lead to another title shot.

“I don’t know him really, I feel like he acts quite silly on his [social] pages but it’s not out to hurt anybody, it’s not too offensive to anybody I don’t think,” Whittaker said of Costa. “But I don’t follow him, I am not a “fan”, so it’s hard to say exactly what he does. But if he’s not hurting anybody and people get a laugh out of it, who cares?

“As an athlete I’m definitely not underestimating him; people said he wasn’t that impressive in his last bout, but he still he poses as much risk to me as much as any of the other [middleweight] competitors have. So I’m taking this next fight, as I do with all of them, with 100% seriousness.

“He’s an explosive, athletic dude. He’s quite well rounded and he uses that athletic ability and physique to have his way with a lot of competitors. The plan is just to [move the head] heaps and try and hit him a lot, to keep it simple.”

While the UFC’s first venture into Paris proved an overwhelming success, Whittaker says the promotion’s return to Australia can top it.

“The Pommies come close, but not quite. It’s a special occasion, Australians love their fighting, they love their events, we love our sports. So we’re going to get in there and just take the roof off.”