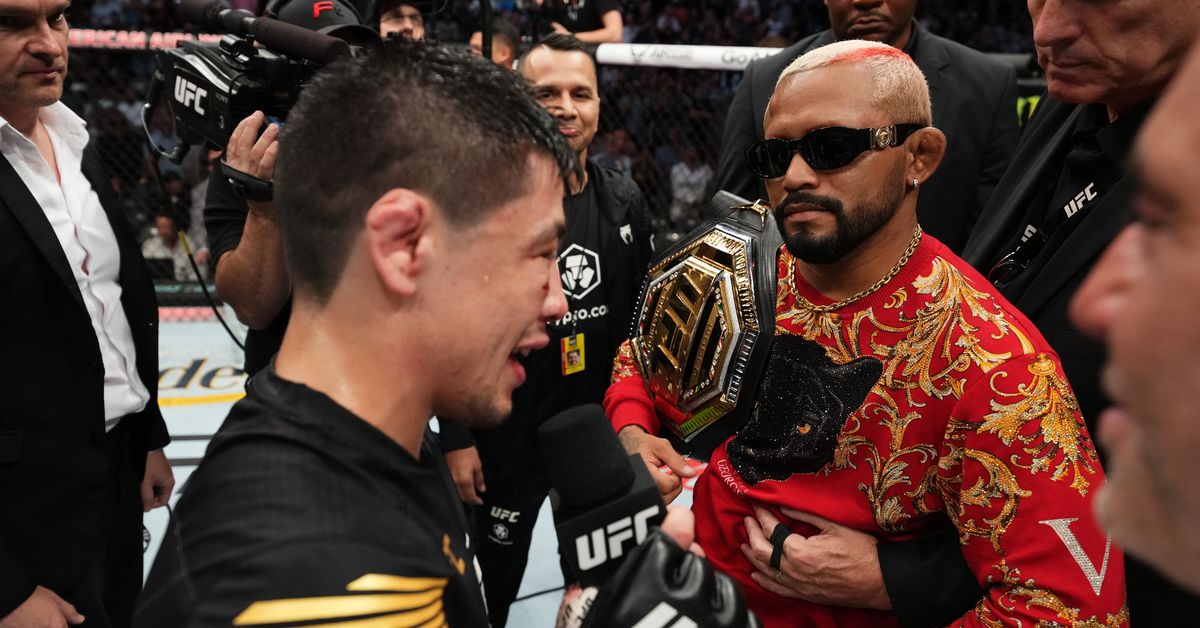 Deiveson Figueiredo will face Brandon Moreno for a record fourth time in a row in the main event of UFC 283 in Rio de Janeiro, Brazil, on Jan. 21, and feels like the company is trying to force “The Assassin Baby” as the 125-pound champion.

Figueiredo and Moreno are 1-1-1 so far inside the octagon, and the Mexican talent captured the interim belt earlier this year against Kai Kara-France while the Brazilian recovered from an injury. Now, they meet in January to decide once for all who’s the rightful flyweight king.

“[Alexandre] Pantoja didn’t deserve to be in stand-by [at UFC 283], Pantoja deserved to be fighting for the belt already,” Figueiredo said on this week’s podcast Trocação Franca. “In my opinion, Pantoja was the guy to fight Brandon Moreno [for the interim] but they didn’t make it. It’s the UFC rules, let it happen.

“Even though I notice the UFC wants to make Brandon Moreno flyweight champion, I won’t give them that satisfaction. I’m here to defend what’s mine and show it to them in this fight.”

Asked why the UFC would prefer to have Moreno as champion instead of him, Figueiredo said he’s not entirely sure, but could be “because he’s there all the time, in the media, and I come back to my [small town] and stay focused on my fights.”

“I think I have to go there and knock him out [to end that],” Figueiredo said. “Only by knocking him out I’ll show [the UFC] I’m the true rightful owner of the belt. And maybe then they will stop putting [Moreno] on Pantoja’s spot.”

The top-ranked flyweights will face off for the fourth time on a pay-per-view card, this time headlining an event in Brazil, and Figueiredo “guarantees” it will do well in gate and draw good pay-per-view numbers because “there are many people interested in watching this fight.”

“Even though [a tetralogy] is a bit annoying, the audience knows it’s a good fight and it sells well, it’s worth paying for the pay-per-view,” he said. “Deiveson Figueiredo and Moreno will go down in history, brother. It’s rivalry, it’s non-stop brawl inside the octagon. He doesn’t like me, I don’t like him, so we’ll always have that rivalry. I don’t know after we retire, maybe we’ll still fight even retired.”

Figueiredo was planning on doing his next camp at Chute Boxe Diego Lima in Sao Paulo alongside Charles Oliveira, but decided to go back to Belem after not adapting to the cold weather. Even though he mentioned training in Belem as one of the reasons why he lost to Moreno, the fact that his own gym is already built means less distraction.

“We can’t underestimate the opponent,” Figueiredo said. “Every fight is different, we’re anxious to get to fight night and put everything we did in training in action. I want to fight him, I want to make weight — which is the first war every athlete has —, and defend the belt here in Brazil with almost 100 percent of the fans cheering for me, and leave as champion. It’s going to be the biggest joy of my life.”