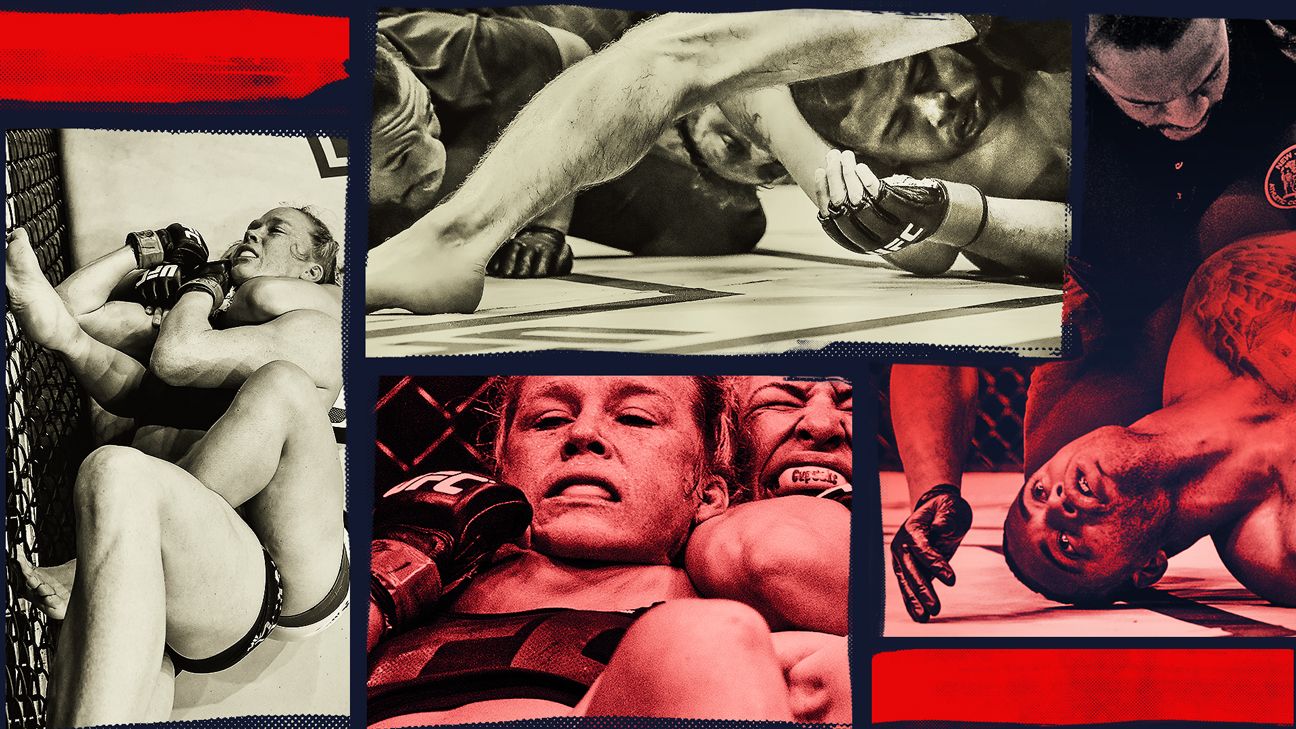 More than 10 years ago, Holly Holm was sitting in the JacksonWink MMA facility in Albuquerque, New Mexico, discussing “what if” scenarios with her team.

Holm was still a professional boxer at the time (she wouldn’t fully transition into MMA for several years), but when the conversation steered toward chokes and, more specifically, tapping to chokes, Holm said she didn’t think she would. The only way to know for sure would require it actually happening in a fight — but Holm guessed she would rather go unconscious than surrender.

The matter was put to the test in March 2016. Four months after Holm’s shocking upset of Ronda Rousey for the UFC bantamweight championship, she suffered the first loss of her career to Miesha Tate via technical submission. The term technical submission refers to a result in which an MMA contest is waved off due to a submission, but in the absence of a tap.

In Holm’s case, Tate took her back in the fifth round and locked in a rear-naked choke. Rather than tap, Holm continued to pull at Tate’s arm and, in her final moments of consciousness, desperately lashed out with punches straight into the air.

“I think I was still trying to fight,” said Holm, of the memorable finish.

Over the past five years, there have been 399 total wins by submission in the UFC. Of those, 43 were classified as technical submissions, and all but one of those were some form of choke. The one outlier was Ronaldo ‘Jacare’ Souza refusing to tap to an armbar by Andre Muniz in his final UFC career fight.

Reasons vary for why those fighters chose not to tap. In some cases, they actually did, but the referee missed it. In others, the fighter waited until the very last second to surrender, and ended up going unconscious. And in some, like Holm’s, the fighter just simply refused to acknowledge defeat.

There are common themes throughout the stories and mindsets of these moments, but they are also all unique in their own way.

ESPN spoke to dozens of fighters involved in technical submissions since 2018. Here are a few of their accounts.

When you get choked out, you wake up five to 10 seconds later feeling great. It’s like you took a 30-minute nap. It’s fantastic. Of course, you don’t try to get choked out, but being aware of the fact you’ll be fine is big. I don’t tap until I have to. If you’re getting choked, there is typically a second of darkness you see coming, and that’s when you tap. Sometimes if you don’t tap, they’ll think they don’t have it, readjust and that’s when you can move.

It’s only unsettling the first time it happens. Once you’ve been choked out, there’s no longer panic. You lose that mechanism. Your brain knows what’s happening. It doesn’t like what’s happening and it’s fighting it, but it’s OK.

Actually, with all my amateur fighters, all the young ones, I will have a day where I just choke all of them out. I’ll say, ‘OK, I’ll choke you once and you’re gonna tap. Then I’m going to choke you a second time, you’re gonna tap and I’m going to ignore it.’ They all go through that. And what’s funny is they all tap between four or five seconds before they go unconscious. And I tell them, ‘That’s four or five seconds where I might have readjusted and you could have used that to escape.’

I was so rocked when it happened with Julian, and he was squeezing to take my head off. When I woke up, I knew immediately what had happened. My coach actually told me the first thing I said when I woke up was, ‘Well, I guess I had a good career in the UFC.’ Which I thought was pretty impressive, that I was aware enough to realize exactly what happened and what I thought it meant for me.

He had the choke, and I remember going for a couple of defenses, but then he readjusted to where it didn’t matter if I was outside of his leg anymore. I knew I wasn’t getting out and it was getting tight, so I started tapping — and started wondering why the guy was still squeezing. So, then I start tapping with both hands and he’s still squeezing, so I was kind of just like, ‘OK, well, this is happening.’ I won’t say that panic set in. If it was a street fight, yeah. That could be your life. That could be the last consciousness you ever have. But I figured the referee must have missed it, but it’s a regulated fight. I was a little bit mad. I feel like, if you don’t have to be unconscious, there’s never a time you should be.

In the past, it did bother me that it happened. You don’t want your family to see you unconscious. It’s also kind of embarrassing. Allowing someone else to render you unconscious, feels kind of shameful to me as a competitor. There are no “what if” factors, right? There’s no, ‘Well, if there was a life and death situation, he would have done what he needed to get out.’ No. You went unconscious. At that point, you’re defenseless. I feel like any time you’re defenseless, it’s not a good look. So for me, that’s where that feeling of embarrassment comes from.

I didn’t tap because that fight just meant too much to me. I didn’t want to lose. I was already coming off a loss. In that Manny fight, he had me in the triangle and then put me in an armbar to get my head down, and I had just had my arm snapped in the fight before against Damian Stasiak for not tapping. I had promised myself during those two years off, ‘If anyone ever gets me in an armbar again, I’m going to tap,’ because it took me so long to come back from that. But when it happened again in that fight, I remember thinking, ‘Nah, not a chance. Just snap it.’ I think I’m too stubborn for my own good. But then he switched back to the choke and with a choke, I know I’ll wake up and be fine.

I still tell myself that I will tap if it’s going to end in a serious injury, but when I get in there, I just won’t do it. It’s stupid, really. I’ll get to a point where it’s so bad, it could end my career type of thing, but I don’t know. And I have tapped to chokes before. But then I was mad at myself. It’s like giving up, when there might have been a few seconds left. In those moments, you’ve got milliseconds where those thoughts are flying through your head and sometimes you just tap immediately when you don’t even mean to. And it’s like, ‘Oh s—, I can’t believe I just tapped to that!’ It’s like if you’re on a treadmill at the end of a hard workout and your body will just jump off before finishing and you’re like, ‘Nooooooo! Why did I do that?’ In an instant, you can do something you don’t mean to do. So, I try never to do that.

I had a long career of amateur fights before turning pro, and when I was an amateur, I tapped a few times and it haunted me. I could never be at peace about those losses. So, I promised myself I wouldn’t tap anymore. I’m just never going to tap again. And it’s helped me. There have been times in the past when I was in a tight choke, but I refused to tap and the opponent let it go and I ended up winning the fight by TKO.

Before MMA, I used to play soccer, and everyone called me a “warrior.” I didn’t pay much attention to it at the time, but when I got into MMA, I realized they were right. I had this warrior mentality in me. And a lot of foreign fighters, especially those in post-Soviet Union countries, like to say they are gangsters and act tough. Everyone who grew up in the ’90s in one of those countries had a tough upbringing, and every second guy is calling himself a gangster for it. I’m from the western part of Kazakhstan and I don’t want to just talk about being gangster. I’ve been in keylocks and armbars and refused to tap, not just to chokes.

Women’s strawweight contenders Marina Rodriguez and Amanda Lemos go head-to-head on Saturday to determine who will move closer to a title shot.

For me, when it comes to a choke, there’s no risk of a limb snapping. If you’re in an armbar, you could snap your arm and be out for months. If you’re in a blood choke, you have a little nap, you wake up and you’re good to go. Anyone else who has been choked out will tell you, it’s one of the best naps you’ll ever have. I wouldn’t recommend people just go out and choke themselves for a nap, but you wake up and you’re very refreshed.

Tony was calf-kicking me a lot, and I actually had three fractures in my shin. The last one took my leg out, I collapsed and as I went to get up my leg was just dead and he pounced on my neck. Next thing I know, I’m in a D’Arce. I pretty much remember everything about it. My mindset is to try and hold out as long as possible to see if I can get space to escape. So, it’s not a pride or ego situation, it’s a tactical decision. It’s risk vs. reward. If they loosen up and I escape, good. If not, well, I have a snooze for a few seconds and wake up totally refreshed.

Going into a fight, I try to go to this place in my mind where they are going to have to kill me to get me out of there. And I have had a couple of fights where I toughed out a few of those submissions and they gave up as they got tired and I was able to take over the fight. This one in particular, it was a guillotine he finished from side control on the opposite side. Normally to defend that choke, you just pass to the opposite side and you’re safe. I was telling myself, “I’ve passed to the side, I’m safe, I’ll just let this guy burn out his arms …” and next thing I knew, I woke up on the canvas.

It’s such high stakes in the UFC. I wanted to keep my job. You’re willing to do anything in there, to stay in it and get the win. You’ll be in there and actually have that thought: OK, this is a tight spot, but your options are to lose or suck it up and potentially escape and keep your job. That becomes an easy decision. You definitely do get street cred for refusing to tap, but I coach back home and it’s something I can tell my fighters that, ‘Hey man, I’m not just telling you these things. I’ve been in there and gone through them. Don’t quit.’ It’s something I tell my son and my fighters: Don’t quit.