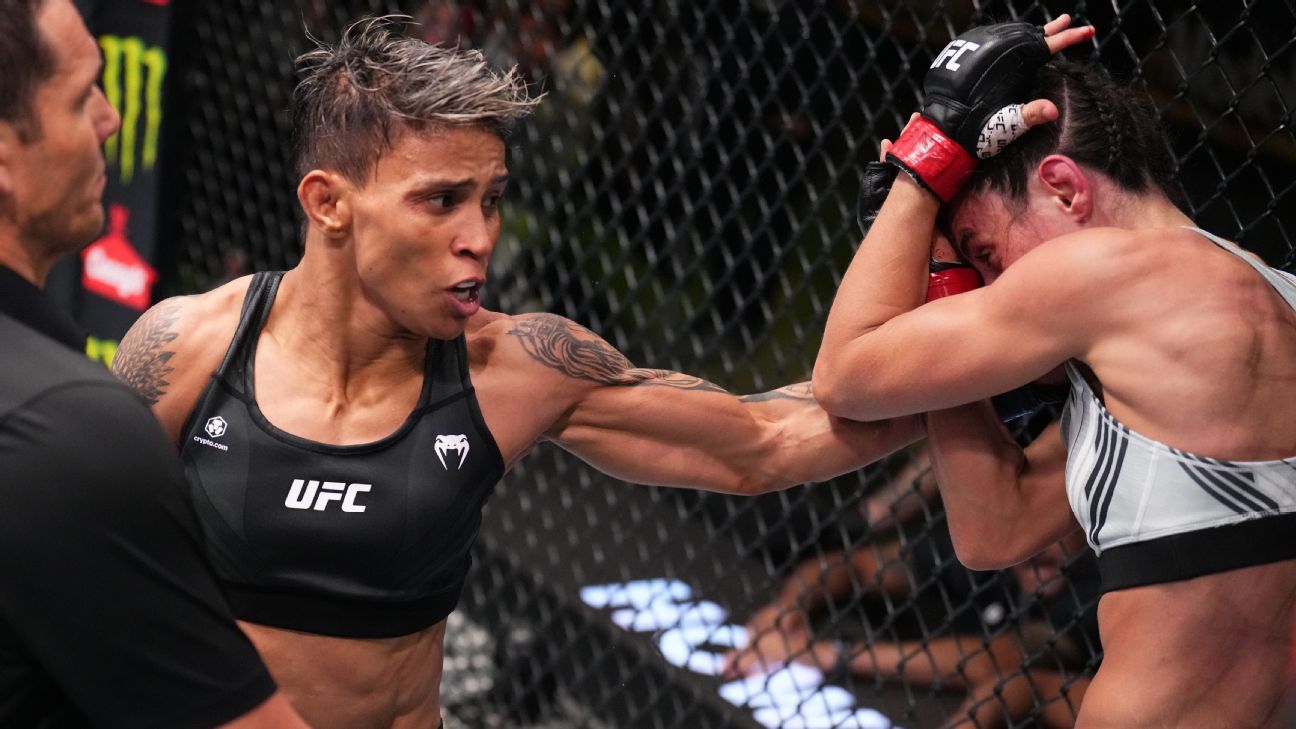 Amanda Lemos might not be the most well-rounded fighter in her division, but her power makes her as dangerous as anyone at 115 pounds.

Lemos finished Marina Rodriguez via TKO at 54 seconds of the third round Saturday in the main event of UFC Fight Night in Las Vegas. Rodriguez was poised for a title shot if she won, but now Lemos has snatched her spot near the top of the rankings.

The finish came after a big counter overhand right by Lemos. The punch landed to Rodriguez’s forehead, as Rodriguez was coming in for a combination of her own. It stopped Rodriguez in her tracks and left her rocked. Lemos pressed forward with another big right hand and then flurried with right and left hooks until referee Jason Herzog stepped in to stop it.

“Her legs started wobbling a little bit,” Lemos said in her postfight interview. “I didn’t think twice. I’m going to finish the fight right there.”

ESPN had Rodriguez ranked No. 4 in the women’s strawweight division coming in, with Lemos at No. 9. The big stoppage victory should push Lemos closer to title contention. She proposed the idea of being the backup fighter for the women’s strawweight title fight next week at UFC 281 between champion Carla Esparza and former champ Zhang Weili in New York.

The first round was relatively uneventful. Rodriguez was able to get into top position on the ground toward the end of the frame. Lemos started taking over in the second. She landed a hard right-hand counter, took Rodriguez’s back on the ground in a scramble and rode out the round in top position.

That power proved to be too much for Rodriguez in the third. Lemos knew she’d have the advantage in exchanges.

Lemos (13-2-1) has won two straight and seven of her past eight fights. The Brazilian-born slugger has finished five of her seven UFC victories. That ties her with Rose Namajunas and Jessica Andrade for the most finishes in UFC strawweight history. Lemos, 35, was coming off a second-round submission win over Michelle Waterson-Gomez in July. Her only loss at 115 pounds came against Andrade in April.

Rodriguez (16-2-2) had a four-fight winning streak snapped. The Brazilian-born fighter had only lost once before in her MMA career, to Esparza in July 2020. Rodriguez, 35, was coming off signature wins against contenders Yan Xiaonan and Mackenzie Dern.