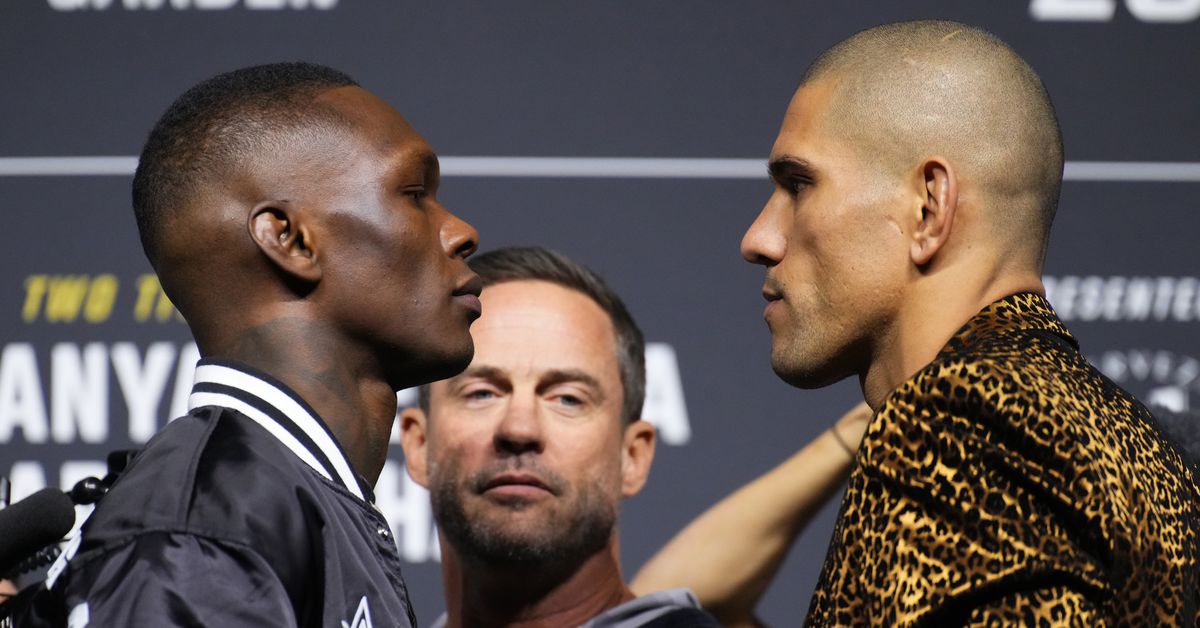 Adesanya is one of the most dominant champions in the sport. He’s defended his title five times in a relatively short span, turning away most of the Top Five in the process. As a result, UFC started looking outside the normal box of options. Pereira, fearsome knockout artist with a pair of wins over Adesanya, was an easy choice. However, “Poatan” had to do his part of win a trio of increasingly difficult UFC fights. He’s climbed the ladder enough to make a title shot reasonable, and now fight fans are getting treated to very arguably the greatest striking match up in mixed martial arts (MMA) history.

Range control is likely to be the deciding factor. Adesanya’s footwork will be tested, as he can only enter the pocket on his own terms. If pushed back into the fence, he’s in a ton of danger, so avoiding that black line on the outskirts of UFC’s canvas will be vital.

One way or another, Adesanya will have to earn Pereira’s respect with his hands. A stiff jab will help, but to really back off Pereira, it would help if Adesanya managed to land some hard counters early. Bruno Silva managed to do so by slipping Pereira’s infamous left hook and firing back in combination, so perhaps that’s a potential revenue to early success for the champion as well.

Record: 6-1
Key Wins: Sean Strickland (UFC 276), Bruno Silva (UFC Vegas 50), Andres Michalidis (UFC 268)
Key Losses: None
Keys to Victory: Pereira punches simply melt people. All too often in MMA, power punches with that unique level of death touch fail to develop further as technicians. Pereira, however, has the patience and craft of a hunter stalking his prey, as he’s routinely demonstrated excellent shot selection and smart strategy in setting up his heavy blows.

In terms of big picture strategy, the idea here for Pereira should be to fight as if the knockout is not going to land. Obviously, his best shot at claiming the title ends with an unconscious “Stylebender,” but he stands more likely to land that shot if he’s trying to keep up with Adesanya on the numbers game.

Most of Adesanya’s opponents cannot compete with him at range, but Pereira can. He also can dig low kicks and snap his right teep into the torso. Since Adesanya makes his money by pulling his head back to avoid blows, Pereira would be wise to do more attacking at easier targets, as slowing Adesanya down will help keep his chin a touch more stationary.

I’d like to see Pereira really focus on cutting the cage as well. Adesanya is mobile, and the Octagon has fewer tight corners than a kickboxing ring, but Pereira could really make his opponent pay if he traps him along the cage just a couple times.

Big moments can easily win rounds, and that would force Adesanya to engage more — a potentially vicious cycle that could end an incredible championship reign.

It’s tough to argue this is the best kickboxers battle in UFC history … and there’s a title on the line.

Credit to Adesanya, he’s ran through the division so thoroughly that UFC had to dig into his kickboxing history to find an opponent. If Adesanya passes this test too, he deserves his opportunity to jump up to whatever weight class he’d like. As much as I’d like to believe Robert Whittaker is still a challenge for a potential third fight, is that really worth preventing Adesanya from attempting to achieve greater things?

As for Pereira, his history with Adesanya has granted him the opportunity for an unreasonably quick rise to title contention. Victory here grants him the undisputed crown and likely an immediate rematch, but it still leaves him in a confusing position. Clearly, he’d be the sport’s best kickboxer if he takes out “Stylebender,” but is he really the best MMA fighter at 185 lbs. without fighting a grinder like Vettori, Brunson or even Bo Nickal?

At UFC 281, Israel Adesanya and Alex Pereira will compete for the third time. Which man emerges victorious?

Remember that MMAmania.com will deliver LIVE round-by-round, blow-by-blow coverage of the entire UFC 281 fight card right here, starting with the early ESPN+ “Prelims” matches online, which are scheduled to begin at 6 p.m. ET, then the remaining undercard (on ESPNEWS/ESPN+) at 8 p.m. ET, before the PPV main card start time at 10 p.m. ET on ESPN+ PPV.

To check out the latest and greatest UFC 281: “Adesanya vs. Pereira” news and notes be sure to hit up our comprehensive event archive right here.