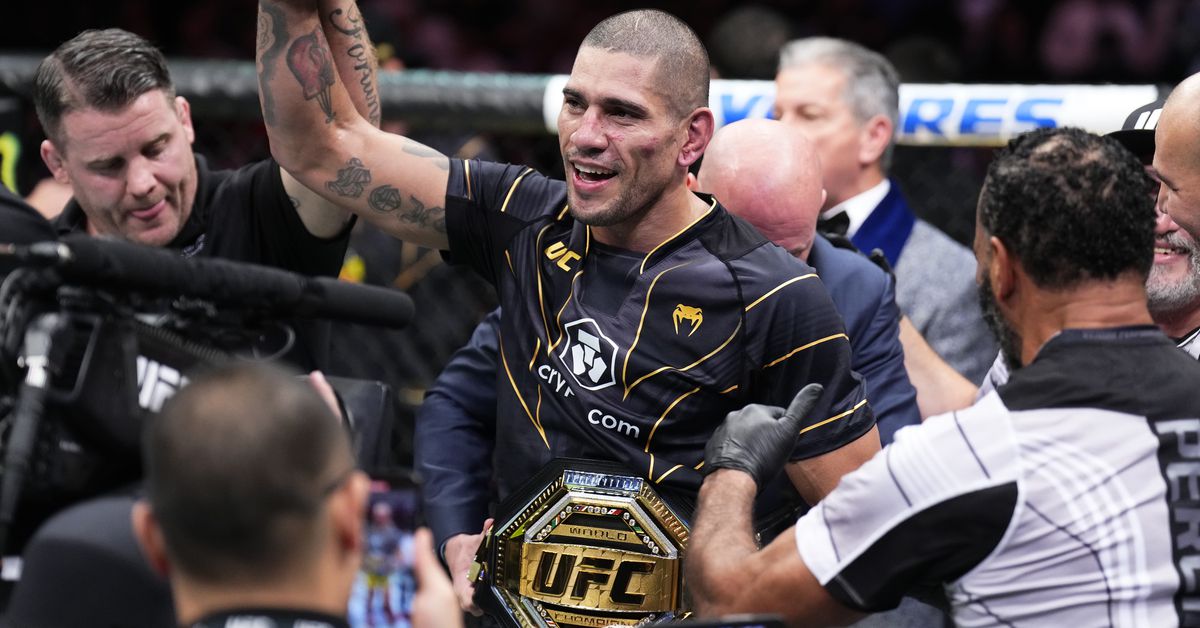 In case you somehow missed it, Alex Pereira authored a tremendous fifth-round comeback stoppage of Israel Adesanya at UFC 281, wresting the middleweight title from “The Last Stylebender” and throwing the division into chaos. Now, the 185-pound weight class is governed by a man with only eight career MMA wins. There are more questions about his game than answers.

Buddy, I am here for it.

Absolutely no disrespect to Adesanya, who was a great champion and remains one of the very best fighters in the world. But the truth is, under his stewardship, the middleweight division became boring. That’s not really his fault, because long-reigning champions always have this problem. Dominance smothers interest, and Adesanya undeniably dominated his competition, sometimes to his own detriment. Now, though, we have a champion who, at the bare minimum, has some very clear liabilities (those grappling exchanges were not good), and guys are going to line up around the block to get the first crack at him. Things are about to get very fun.

Be honest: If the UFC threw all precedent and reason out the window tomorrow and booked Pereira vs. Bo Nickal, who would you pick to win? Pereira would probably be the favorite, but no one would feel wildly confident in him, and we’re talking about the champion of the world facing a guy with three fights and less than one year of experience. That is electric!

After three years of being reasonably confident Adesanya was going to win, only being a matter of whether he did it by dynamic finish or controlled decision, having a champion who might be an underdog in his first title defense is fascinating stuff, especially because maybe he shouldn’t be. We truly know so little about Pereira as a fighter that if you said he was about to rattle off five title defenses or lose five straight, both are equally plausible. That maybe isn’t totally unprecedented (Brock Lesnar springs to mind), but this is rarified stuff, and it’s incredibly compelling.

Other people will talk about the strategic choices of Adesanya, or lament that such a raw talent somehow won the title. But at the end of the day, MMA is supposed to be fun, and with Alex Pereira turning the world on its head on Saturday, the sport is undeniably more interesting and more fun than it was on Friday.

“I tried to pace myself, but going into the last round, my corners and Glover kept it real with me.” – Alex Pereira on his fifth round comeback and knowing he needed a finish to win.

“F****** bring back Steve Mazzagatti.” – Israel Adesanya on the stoppage in his loss to Alex Pereira.

“I wouldn’t rule it out.” – Dana White on the possibility of an immediate rematch between Pereira and Adesanya.

“A billion Chinese MMA fans, they are looking for a big pay-per-view event in China.” – Weili Zhang on what she wants after reclaiming the UFC strawweight title.

“Sorry you’re down there, but I didn’t create gravity.” – Michael Chandler on spraying Dustin Poirier with blood during their fight.

Alex Pereira: In only his fourth fight in the UFC and eighth fight overall, Pereira won the middleweight championship. There are still a ton of questions about the new champ, but “Poatan” proved that if nothing else, he is a legitimate threat to anyone at 185 pounds.

Zhang Weili: It was the outcome that was expected but, that didn’t make the victory any less sweet. Zhang reclaimed the strawweight title she lost to Rose Namajunas, becoming just the 13th fighter to reclaim a belt in the UFC.

Ryan Spann: After knocking out former light heavyweight title challenger Dominick Reyes in just 80 seconds, Spann explained his performance by saying this was the first fight he ever had a real training camp for. If we take him at his word, the light heavyweight division has officially been put on notice.

Erin Blanchfield: It’s tough for Blanchfield’s sky-high stock to rise any further, but her absolute demolition of the incredibly popular Molly McCann did it. McCann is a quality fighter, and Blanchfield ran through her with ease. At this point it’s not a question of if she fights for a title, but when.

Dustin Poirier: Poirier was expected to defeat Michael Chandler in a “Fight of the Year” candidate, and he did just that. While some might want to reward him, the truth is Poirier simply held his position in the ultra-deep waters of the lightweight division.

Dan Hooker: Hooker’s second-round TKO was imperative to keep “The Hangman” as a going concern in the lightweight division. But given the tough run he was on before this win, he’ll still need a couple more wins to get his stock on the move.

Israel Adesanya: If Adesanya had managed to hold on and take a decision win over Pereira, we might be singing a different tune. But then again, if I had wheels, I’d be a wagon. Adesanya didn’t press his advantages, allowed Pereira to hang around too long, and was far too comfortable conceding ground and fighting with his back on the fence. He was able to mess around like that for awhile, but eventually, “The Last Stylebender” found out.

Frankie Edgar: It’s hard to say that Edgar’s stock took a nose dive after Saturday since he’s retiring from the sport, but the way everything went down feels like it needs to be said. Three brutal KO losses in a row for the former lightweight champion, and in this one he looked old, and past it. The MMA gods are never gentle to the aging legends, and UFC 281 was no exception.

Brad Riddell: At one point in time, Riddell was a top-15 lightweight who looked like he could be a dark horse in the sport’s best division. Now, the City Kickboxing product has lost three in a row, all by stoppage, and his career is reeling. It’s unclear what exactly has caused this precipitous drop-off for “Quake,” but he’s in dire straits at the moment, just like the final fighter of this section.

Dominick Reyes: After getting robbed against Jon Jones, Reyes has had one of the most incredible drop-offs in recent memory, losing four in a row, the last three by devastating KO. At this point, it seems unlikely he will ever recapture the magic that nearly led to him upsetting one of the greatest fighters of all time, and instead he’ll just be left wondering where it all went wrong.

While UFC 281 was filled with early stoppages that mitigated the potential for referee and judging shenanigans, that doesn’t mean everything was perfect. Namely, there were three notable things that happened on Saturday. Here they are in descending order of importance.

Alex Pereira vs. Robert Whittaker: While an immediate rematch may happen, Pereira is now 3-0 over Izzy. Let’s let Whittaker get his shot at the new champion while Adesanya rebuilds.

Weili Zhang vs. Amanda Lemos: Rose Namajunas might be the front-runner for the new champion, but I cannot fathom giving her a title fight coming off the worst performance in modern MMA history. Rose needs to beat someone before getting back in there, and Lemos is coming off a tremendous victory over the person who appeared to be next in line.

Dustin Poirier vs. Beneil Dariush: It’s a short turnaround, but book this for UFC Perth, and Dariush can serve as the backup for the lightweight title fight if anything happens.

Michael Chandler vs. Conor McGregor: Chandler has been calling for this one for a long time and now, the time is right. McGregor will be coming back next year and this is guaranteed fireworks, plus a big name. Book it.