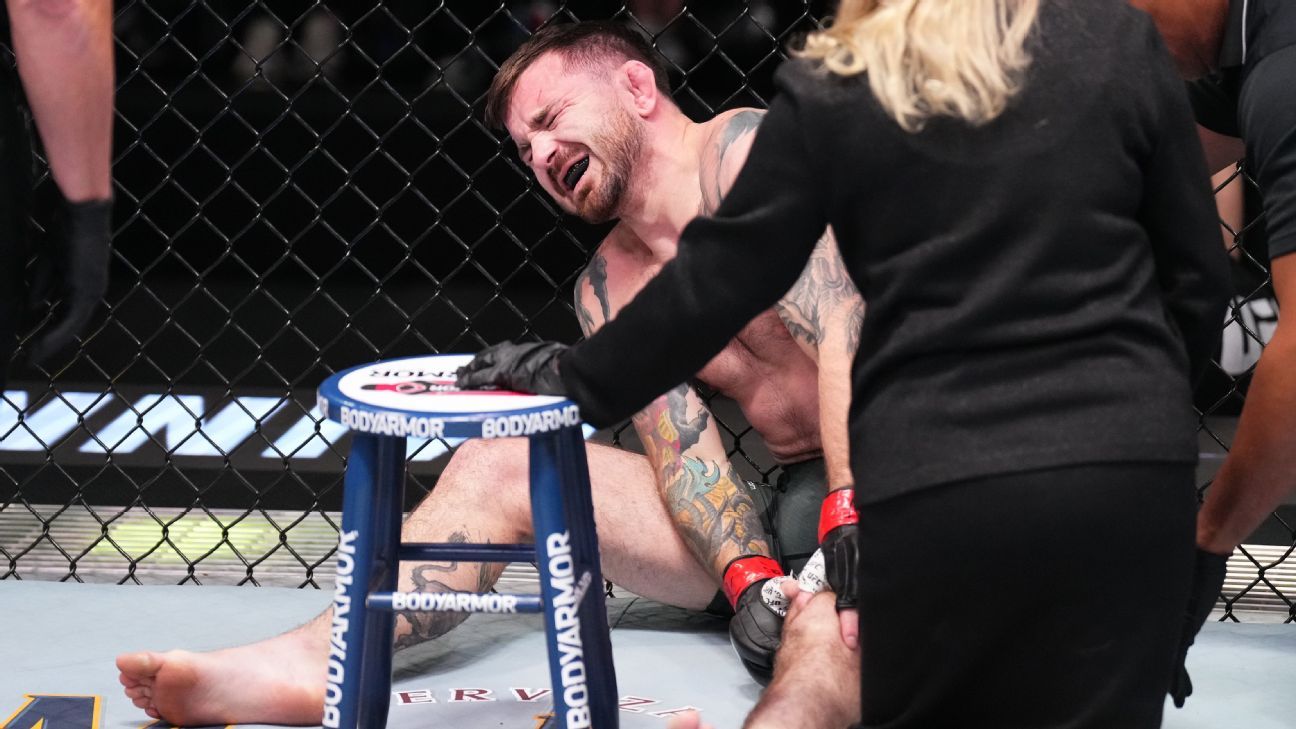 NEW YORK — A well-known MMA coach was sitting up against a locker room wall earlier this year with his fighter and other coaches as the fighter warmed up in preparation for his UFC bout later that evening. There were other fighters and teams in the room as well, a common occurrence backstage at UFC events.

The coach observed one of the other athletes on the card getting ready for his fight and didn’t like what he saw. The fighter looked lethargic, almost like he already had lost a shot of adrenaline. So, the coach quietly pulled out his phone and placed a small bet on the fighter in question’s opponent that night.

Wagering in mixed martial arts, specifically the UFC, has come under scrutiny as of late. Last month, UFC chief business officer Hunter Campbell announced in a memo to fighters that they and members of their teams, including coaches, are no longer allowed to place bets on UFC fights. The memo came after the UFC got guidance from state regulators and noted that in certain jurisdictions, it is a crime for fighters or coaches to bet on fights from leagues with which they are affiliated.

Less than four weeks after that memo was sent out, a UFC Fight Night bout Nov. 5 between Darrick Minner and Shayilan Nuerdanbieke came under investigation by U.S. Integrity, a Las Vegas firm, after several sportsbooks in multiple states reported suspicious wagering on the match. Nuerdanbieke won via first-round TKO after Minner appeared to suffer a left knee injury. A lot of money came in on Nuerdanbieke, the favorite, to win by knockout in the first round – enough to make the line move from -220 to -420. Additionally, bets were heavy on the bout to last fewer than 2.5 rounds, which caused some sportsbooks to take the fight off their boards.

Minner and his coach, James Krause, who hosts a popular betting podcast and runs a betting Discord group, have not commented on the situation. The UFC released a statement that its betting integrity partner, Don Best Sports, “will conduct a thorough review of the facts and report its findings.”

White is adamant about this bout, but the recent circumstances have shined a light on gambling among members of the MMA community, including fighters, coaches and managers. ESPN spoke to a dozen people in the sport who agreed to discuss the issue anonymously. The most common response was that betting was “widespread,” but not to the point where hundreds of thousands or even tens of thousands of dollars were being wagered.

One well-known coach believes that many fighters and coaches with ties to the UFC are betting on MMA bouts consistently, with the majority wagering anywhere from $20 to a few hundred dollars per fight and a few hundred to a few thousand dollars per card.

“I would say some are doing real money,” the coach said. “But very few. I think if people had more money, they would do more. But for MMA as a whole, there’s not a ton of money in it. I think people are gambling regularly on the fights on a somewhat moderate level.”

No one ESPN spoke with believes that fight fixing is going on or that athletes are losing on purpose. Tae Hyun Bang, a South Korean fighter, went to prison for taking bribes to throw a 2015 UFC fight against Leo Kuntz. Still, the belief at that time, before widespread legalized gambling in the U.S., was that it was just an isolated incident. Bang didn’t even end up going through with the plan, either — he won the bout and returned the money.

However, the consensus in the MMA community around Nuerdanbieke vs. Minner is that many people became aware of Minner’s knee injury in the hours leading into the bout. The coach said a “sharp bettor” in an MMA gambling Discord group he is in (not the one run by Krause, Minner’s coach at Glory MMA in Missouri and a former UFC fighter) wrote that everyone who wagered on Minner should cancel their bets. The bettor wrote, the coach said, that a lot of money — millions — was coming in on Nuerdanbieke, specifically to win in the first round.

That does not mean Minner or his team did anything questionable. Several coaches, managers and fighters said it is common for fighters to go into fights with injuries for two reasons: for the purse (fighters don’t get paid unless they fight) and because if the belief is that their injury came during the bout, the UFC insurance policy picks up the costs rather than the fighter paying out of pocket.

Heavyweight contenders Derrick Lewis and Serghei Spivac go head-to-head on Saturday to determine who will move closer to a title shot.

News about injuries can spread quickly before fights. The buzz before UFC 270 in January was that heavyweight champion Francis Ngannou had a knee injury. The line moved a bit toward his opponent Ciryl Gane, but Ngannou won the fight anyway. It’s hard to keep secrets in MMA, members of the community said, though TJ Dillashaw‘s bad shoulder injury heading into UFC 280 last month was mostly kept under wraps. Teams are big and hundreds of fighters, especially those based in Las Vegas, go to the UFC Performance Institute (UFC PI) regularly. People observe things and talk.

“I’m certainly not implying that the PI does anything unethical,” one manager who has repped several UFC champions said. “But there are glass walls in there. I can be on the treadmill and I can see what’s happening inside the physical therapy room.”

The perception of what happened with Minner and Nuerdanbieke concerns many in the community. If there is that amount of money out there on the betting market, in some cases more than a fighter could make in a year or more, could there be the temptation to manipulate things?

“You [can make] yourself $150,000, which is more money than you might make in your f—ing career, by taking a dive,” a coach who has cornered several UFC champions said. “That’s where all of us as coaches and within the organization or within the community go, ‘Oh s—, where there’s smoke, there’s fire and this is potentially what’s going to be the downfall.”

For that reason, many in MMA are happy that the UFC has prohibited betting on UFC fights in its fighter code of conduct. One UFC bantamweight fighter said it was a “slippery slope” if betting at this level is allowed by people in the sport. In other major sports such as the NBA and NFL, betting on games from your league is prohibited. Baseball great Pete Rose has been banned from his sport and kept out of the MLB Hall of Fame because he bet on his team when he was a manager.

“Money just changes how people think,” said the bantamweight fighter, who noted that he does not bet and doesn’t know anyone on his team or in his circle that does. “When they can scam it like that, then it’s f—ed up. … I applaud [the UFC].”

Despite the UFC’s mandate, most people ESPN spoke to don’t believe those in the community will stop wagering. Sponsorships from betting companies are common in the sport. Fighters give betting tips on social media for every card and get paid for them by betting websites. Now-former UFC middleweight champion Israel Adesanya shouted out Stake, his betting sponsor, at the UFC 281 prefight news conference last Wednesday. The UFC has said those situations are still OK. There are even coaches in MMA whom big-time bettors give money to bet for them and the two will split the revenue. For better or worse, gambling has become a big part of the sport’s culture. Betting lines are all over the broadcasts, as well.

“If guys keep their f—ing mouth shut and don’t say much about it and bet responsibility and not walk through the sportsbook making a big to-do about it, I don’t see why anybody would ever stop.”

Another typical response those in the MMA community told ESPN is that while almost everyone is doing some form of wagering, the practice is not exactly lucrative.

“Everybody is doing this, but 95% of the people I know who are betting online — fighters, coaches — are losing money,” a coach at a major gym said. “I know like one or two people that are making money. Literally, it’s like that. It’s not easy.”

While coaches and others in the sport can be deemed “sharp bettors” because of their knowledge of what goes on inside the cage, several said they aren’t making a large amount or even profiting at all. One lightweight fighter said the UFC’s new betting rule is “saving me money.”

In April, the PFL got into hot water when it aired a pre-recorded event and wrote on social media that the bouts were live. Some sportsbooks had lines on the taped fights and, according to several in the MMA community, there were a few coaches, managers and fighters who made a decent amount of money betting on the fights that had already happened weeks earlier. Some bettors had their accounts under review and U.S. Integrity launched an investigation on the matter, ESPN reported at the time.

There are red-flag situations like that one and the Nuerdanbieke vs. Minner fight, but most don’t believe there is significant corruption in MMA. Those in the community told ESPN they would favor state athletic and gaming commissions and the UFC itself being proactive against that sort of thing.

“Some sort of inside information got out [in Nuerdanbieke vs. Minner],” a coach of multiple UFC contenders said. “This one has to be made an example of. Maybe it just ends up being public, it looks bad and on the back end it’s just a slap on the wrist. But someone has to be made an example out of this one, because now everybody just thinks nothing really happened and you can just do that.”