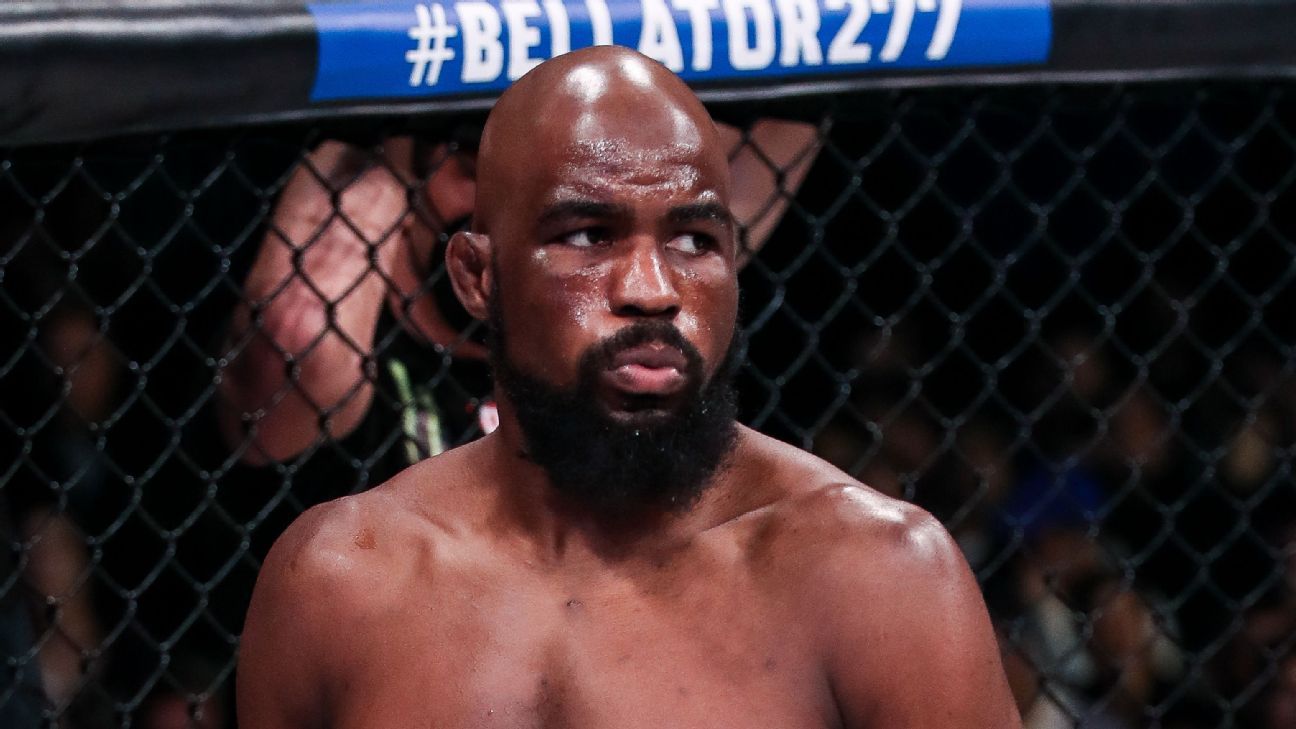 Anderson and Johnson had not spoken for a few months, but Rumble was known for checking in on his buddies when they were getting close to a fight. This particular text featured words of encouragement mixed with some advice.

“Yo, keep your hands up, no mistakes,” Anderson said Johnson wrote to him. “I don’t see this guy beating you, bro. It’s your fight.”

The two exchanged more texts and Johnson, whom Anderson knew was sick, said he was “feeling good” and he would “beat this.” Last Sunday, Anderson found out Johnson had died at age 38 after fighting an illness having to do with his liver for more than a year.

Anderson said he thought about Johnson’s words throughout his training camp and they set in even more after Johnson’s death. At Bellator 288 on Friday in Chicago (9 p.m. ET, Showtime), Anderson challenges Vadim Nemkov for the Bellator light heavyweight title, with $1 million and the Bellator Light Heavyweight World Grand Prix championship also on the line.

The messages from Rumble and his untimely death made Anderson think about what the fight means to him not just as competition, but “more for life.”

“Make it home to your family,” Anderson said. “Make it home safe. … Make every day your best day, because it could be your last day.”

This is the biggest fight of Anderson’s career. Back in April, he was on his way to beating Nemkov and becoming champion, but an inadvertent clash of heads while Anderson was in top position caused a cut on Nemkov’s head and the bout was stopped. The result was a no contest. There would be no crowning of Anderson that night, despite the fact that he had been dominating the fight with his wrestling before the finish.

ESPN has Anderson ranked No. 5 in the world at light heavyweight and Nemkov is No. 8. Anderson owns a UFC victory over former UFC light heavyweight champ Glover Teixeira, who will challenge the man who dethroned him, titleholder Jiri Prochazka, in a rematch at UFC 282 next month. Prochazka has beaten Nemkov in the Rizin promotion, but it was a fight Nemkov was doing very well in before petering out during a Japanese-style, 10-minute first round.

Anderson feels like if he beats Nemkov, he will be the best light heavyweight fighter in the world. And there is a case that can be made in his favor. The Illinois native is unbeaten in four straight since leaving the UFC and has three finishes, including one over current Bellator heavyweight champion Ryan Bader.

“How can you not say the two best are here?” Anderson said. “The two here fought the two best there and we already proved why we’re better than them. Now, it’s between us to set up who is the best.”

When Prochazka beat Teixeira for the UFC title in June, Anderson was watching at home and turned to his wife and told her, “Yo, I would have dogged both of these dudes.”

Getting back to his wrestling basics has been the key to Anderson’s success in Bellator. In the UFC, Anderson said, he was compelled to care about knockouts and highlights and social media followers. When he signed with Bellator in 2020 after asking for his UFC release, Anderson told promotion president Scott Coker that he wanted to get back to being himself. It’s hard to argue that it has not paid off for him.

“I just want to win,” Anderson said. “You look for a knockout to get the attention and retweets and reposts, and all of a sudden it gets you famous on social media. I don’t care about being famous. I care about being a winner.”

And that’s where the thought of Rumble comes back into play. If Anderson can win his fights by taking his opponents down and not taking damage, and can come home to his family healthy, that’s what it’s all about to him. The fact that Johnson reached out to him with those words while Rumble himself was fighting for life is not lost on Anderson, either.

“That meant that he was a real one,” Anderson said.

The co-main event of Bellator 288 is a lightweight title fight featuring two well-known names in MMA. Patricky “Pitbull” Freire will defend the belt against Usman Nurmagomedov. Freire, of course, is the older brother of Patricio Freire, the greatest fighter in Bellator history, a three-time (and the current) Bellator featherweight champion and a former Bellator lightweight champ. Nurmagomedov is the cousin of all-time great and former UFC lightweight titleholder Khabib Nurmagomedov, who is also Usman’s coach.

The fight is a big one for both men. Patricky won the title in November 2021, and it’s the first time he has held a Bellator belt after being with the promotion for 11 years. He holds a ton of Bellator lightweight records and is tied with Michael “Venom” Page for the most knockouts in promotion history (10). Usman Nurmagomedov, meanwhile, is just 24 years old and trying to become the next member of his family and team to capture gold. Islam Makhachev, Khabib’s longtime teammate, won the UFC lightweight title last month at UFC 280.