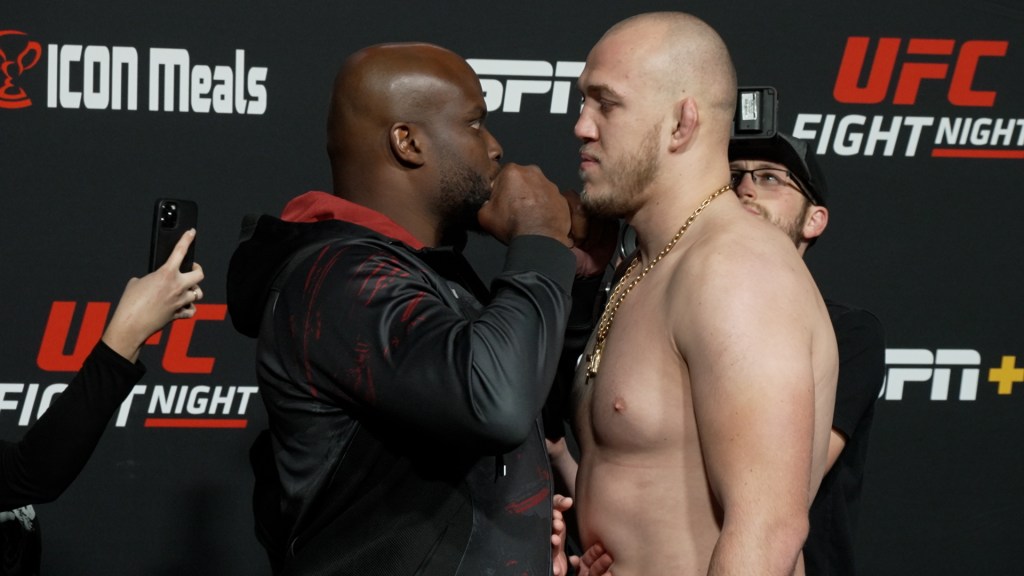 LAS VEGAS – MMA Junkie is on scene and reporting live from Saturday’s UFC Fight Night 215 event, and you can join us for live play-by-play and official results.

Follow along with our round-by-round updates and official results beginning at approximately 1 p.m. ET for the prelims on ESPN+ and 4 p.m. ET for the main card on ESPN+.

To discuss the show, be sure to check out our UFC Fight Night 215 discussion thread. You can also get behind-the-scenes coverage and other event notes from on-site reporter Ken Hathaway (@kenshathaway) on Twitter.

Enjoy the fights, everyone.

Round 1 – Good morning, good afternoon… or maybe even good evening, depending on where you’re reading from! We have some fistfights on our hands. First up, Tereza Bleda vs. Natalia Silva. Bleda making her UFC debut, while Silva trying to build on her momentum from her debut. Silva comes out with some leg kicks. They tie up against the fence. The struggle for position is real. They move away from the cage and Bleda gets a takedown in the center of the canvas. Bleda on top in half guard. Silva reverses position and ends up on top in Bleda’s guard. Bleda shoots for a triangle from the bottom. Silva isn’t fighting properly. She looks a bit lost. Bleda tries to transition to a straight armbar. Silva properly defends that by stepping over, but she’s still in the triangle. We’ve got a human pretzel on the ground right now. The round ends. Clear 10-9 Bleda.

Round 2 – Silva comes out flinging hands. Bleda smartly grabs hold of her tad-to-wild opponent and pushes her against the fence. Silva nicely circles away and out of Bleda’s clutches, only to be shot on again. Silva stuffs Bleda, but Bleda continues to hold on and once again drives the Brazilian into the fence. Bleda yanks Silva’s legs out and briefly gets a takedown. Silva uses the cage to rise up again. Bleda still clinching, driving into the fence. Silva escapes. Back in the center, Bleda looks tired. Silva has much more energy, as she displays with a speedy spinning back kick to the body. Bleda takes a deep breath as Silva tags her with a two-punch combination. Bleda walks into a big left hand by Silva, whose confidence is building each second. Silva walks forward and Bleda shoots. Once again, Bleda is shoving Silva against the fence. The horn sounds. Silva ties it up on the scorecards. It should now be even 19-19.

Round 3 – Silva catches a Bleda kick and tries to take the fight to the ground. Bleda pulls a Tony Ferguson and somersaults out of danger toward the cage. Bleda pushes Silva and they separate. Silva lands a head kick and then three punches. Bleda is pretty gassed. Bleda dives in for a takedown at the EXACT moment Silva throws a spinning back kick to the body. The kick implants directly on the chin and neck of Bleda, who goes down. She tries to get back up but Silva blasts her with a few more punches. Bleda flails around and referee Chris Tognoni saves the semi-conscious fighter.

Round 1 – Both 0-1 in the UFC, these two men could have their backs up agains the wall here, you never know. And they come out firing like it! Garcia drops Hiestand on the first punch landed, a right hand. Hiestand tries to grab hold but Garcia grabs hold of Hiestand’s neck. He’s got a choke in from the back. It’s like a cross between a rear-naked choke and a bulldog choke. This is very odd, but Hiestand is flattened out and is cringing. Hiestand pops out! He’s now in side control on top. Garcia bucks him off and Hiestand pulls for a D’Arce choke. That was a mistake. Garcia gains top control, then tries to transition to the back. Hiestand reverses again and now has Garcia’s back as he scoots toward the cage. This is a WIlD fight already. Momentum shifts everywhere. Garcia turns into Hiestand and is now on top on guard. Hiestand briefly threatens a submission from the bottom and uses it to get up. Then he takes Garcia down! Man. Garcia gets up as Hiestand tries to backpack him. Hiestand leans down on Garcia, who sits on the canvas. Hiestand working for a choke, but he doesn’t have hooks in. Hiestand pulls Garcia back into him and now has the body lock. Hand-fighting commences. Hiestand struggling to get a proper grip. Garcia escapes and moves more toward center canvas, but Hiestand remains on top of him in guard. Garcia wiggles away and the two get up. They fire shots, but nothing lands. Hiestand shoots for a takedown, but Garcia dodges it. Hiestand gets back up as the round ends. What a pace! An early candidate for “Fight of the Night.” 10-9 Hiestand.

Round 2 – Garcia and Hiestand come out a tad more measured. Garcia lands a high kick as he moves foward. Hiestand on the slow retreat. Garcia lands a nice punch. Hiestand shoots. Garcia denies him and lands a leg kick. Both men are orthodox. Garcia really targeting the lead leg of Hiestand now, as another leg kick lands. Hiestand shoots again. Garcia initially looks OK, but when they hit the cage, Hiestand finishes off the takedown. Hiestand in side control, now North South. Hiestand goes around the world and ends up in side control on the other side. Back to North South. Too much movement from Hiestand. Garcia bucks him off and sneaks away. Back up, Garcia throws some big punches and shoots for a single leg against the fence. They separate. Garcia shoots for a double leg. Hiestand tries to use his opponent’s momentum against him and slams his own back against the canvas. It looked like an old school WWE piledriver, but Garcia landed on top of him. Garcia flurries some punches on Hiestand, who gets up. Hiestand shoots as the round ends. 19-19.

Round 3 – It’s anyone’s fight. Garcia lands a leg kick. Hiestand shoots again and shoves Garcia against the fence. Garcia tries to pull a switch, but the risk does not reward him. Hiestand follows through with his takedown and takes the back. One hook is in. Now the body lock is in. Hand-fighting commences. Some rabbit punches from Hiestand. They’re not really damaging, but certainly annoying. Garcia tries to turn into Hiestand. No dice because that body lock is tight. Hiestand is cranking the neck, but he doesn’t have the proper grip. Hiestand adjusts and now it’s a bit tighter. But Garcia escapes. Garcia throwing blind punches over his head. Hiestand returns with some blows of his own. The round ends with wild punches from both men. Fun fight. MMA Junkie scores it 29-28 Hiestand.

Round 2 – Every round starts standing. Here’s Oliveira’s chance to muster up some offense. I’m not sure she can afford to get taken down again. There’s a fairly big gap there. Oliveira knocks Demopoulos off balance with a push kick to the stomach. Demopoulos gets up. Despite her success on the canvas, Demopoulos shows no indication she is uncomfortable in striking. They exchange. A massive, looping overhand right from Demopoulos drops Oliveira! Demopoulos pounces. Oliveira grabs her and eventually halts the flurry, but Demopoulos is on top of her again in a near-mount half guard. Demopoulos moves to mount. Oliveira is long and is doing a good job of breaking Demopoulos’ posture. Demopolous lands some big ground-and-pound as the round ends. 20-17 Demopoulos.

Round 1 – Turcios comes out with a heavy head kick. Natividad scores a takedown seconds later. Turcios fires punches off his back and grabs Natividad by the waist. Turcios reverses Natividad and drives him into the fence. Tucios yanks Natividad’s legs. Natividad gets up and away. Back on the feet, Natividad shoots again. Tucios meets him with some heavy Travis Browne elbows. Natividad sticks to the attempt and drags Tucios down. Natividad works to the back. They scramble and Turcios ends up nearly taking Natividad’s back. Natividad fends that off with a kneebar submission attempt. Turcios escapes and front headlocks Natividad, who gets up and lands an elbow on the break. Natividad lands a leg kick followed by a big knee to the head. Turcios takes a step backward, then shoots for a takedown, which he gets. Natividad scoots to the cage, gets up, and drives Turcios into the fence. Turcios spins Nativiad back toward the center of the cage. The fighters stumble to the canvas. Natividad drives Turcios into the canvas. They separate. Natividad nearly lands another big knee. Turcios takes him down and moves to the back but has no hooks. Natividad senses this and gets up. They separate as the round ends. Based on damage, 10-9 Natividad.

Round 2 – They trade kicks. Turcios shoots. Natividad threatens a kimura on the attempt, spins Turcios around, and lands on top. Turcios briefly gets up, only to be taken down again. Turcios gets up and drives Natividad into the fence. They separate, but Turcios lets his guard down on the break. Big mistake. Natividad drills him with a sneaky left hand and Turcios is on invisible roller skates. The punch connected right behind the ear. Turcios wildly shoots. Natividad punches him a bunch before Turcios works back up. They separate. Turcios appears to be recovered. Turcios shoots and gets a takedown. Turcios nearly moves into mount, but Natividad grabs a high crotch. Natividad elevates and drives Turcios into the fence. That man is strong. Turcios threatens a guillotine choke, then pulls a switch on Natividad. Turcios shoves Natividad into the cage. They separate and exchange as the round ends. 20-18 Natividad.

Round 3 – They trade. Natividad bowls Turcios over with a takedown, then grabs hold of the beck. Natividad working for a guillotine, but Turcios fights out of it. They rise back to the feet. Simultaneous jabs lands. Natividad throws a flying knee and Turcios walks right into it. The blow folds Turcios down, but he grabs a leg and drives Natividad to the fence. They separate. Natividad lands another flying knee, then a front kick to the face. Turcios eats it, presses forward, and lands a combination of his own. Turcios shoves Natividad into the fence. With his back against the cage, Natividad somehow drags Turcios to the canvas with a single leg. Turcios reverses and drives Natividad into the cage. They separate. Natividad whiffs on a big punch, as Turcios ducks under and tries another takedown. After some more wall-and-stall, they separate. Natividad shoots for a takedown. Turcios pulls a switch and gets Natividad’s back. He’s pounding away from back mount. Natividad shifts and Turcios grabs a rear-naked choke. There’s about 30 seconds left. What a come back this would be. Natividad looks OK for now – and he’s out! Wow. Turcios pummeling away from the back as the clock ticks away. There’s the horn. Close fight. Could go either way. MMA Junkie scores it 29-28 Natividad.