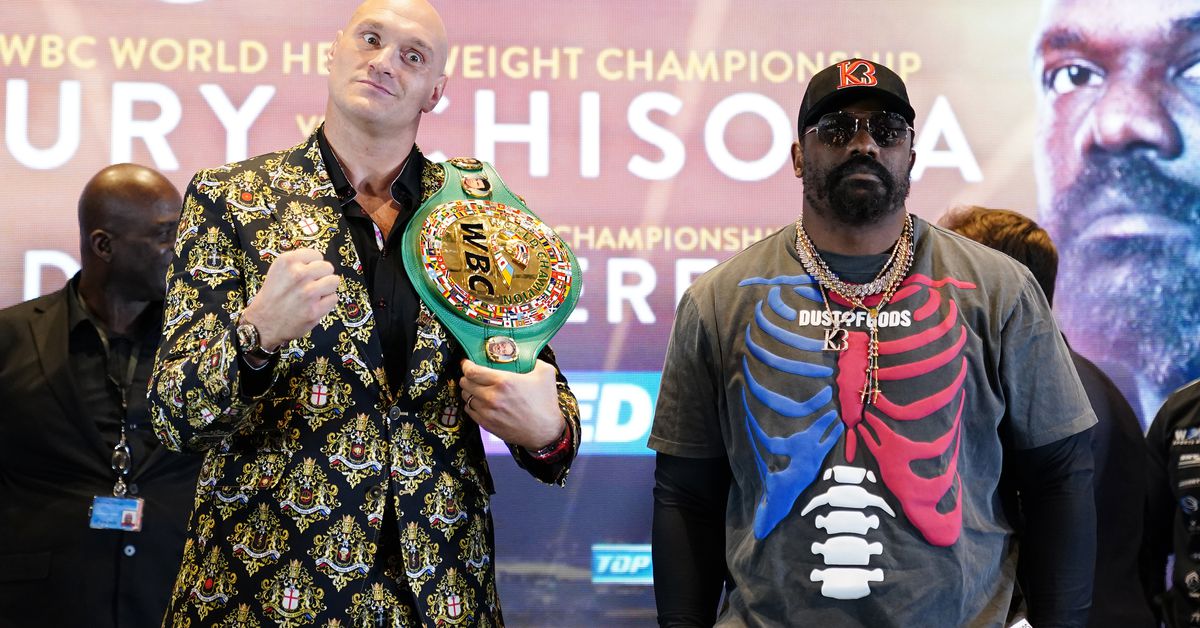 MMAmania.com will deliver LIVE coverage of today’s main event below. The ESPN+ streaming broadcast (watch it here) kicks off at 1 p.m. ET, with Fury and Chisora likely making the walk closer to 4 p.m ET.

“The Gypsy King” and “Del Boy” have met twice before. A fresh-faced Fury out-warred an overweight Chisora in 2011, then stopped him in 10 rounds when they met three years later. Chisora is coming off arguably the biggest win of his career, having narrowly edged out two-time former title challenger, Kubrat Pulev, in July, but few expect the third go-round to go better for him.

Round one: Chisora bullies Fury to the ropes, tries an overhand right, and gets clinched. Some body work before Fury ties up again. Fury fires a 1-2, then another sequence of Chisora hitting the body and getting clinched. Solid right hand from Fury and a combination behind it. Clinch. Chisora trying to dip and wade his way inside. Halfway through. Tight uppercut by Fury into the clinch. Clinch. 1-2, clinch. Short uppercut and a 1-1-2 behind it into the clinch. Fury circling and potshotting, ties up when Chisora tries to step in. Chisora body jab, eats a double jab in return. 10-9 Fury.

Round two: Fury shoves Chisora away after missing with a flurry. Solid overhand lands for Chisora. Trading lefts inside. Jab stings Chisora. Chisora misses a big overhand and gets clinched. Chisora continuing to push forward. Mugging inside. Clinch. Fury digs an uppercut to the body. Chisora comes back with a right downstairs halfway through. Check hook and double right from Fury before tying up. 1-2, clinch. Three-piece capped with a cross. Heavy uppercut. 1-2-uppercut. Fury tees off on the ropes, backs off, and re-engages as Chisora waves him on. Thumping him in the corner. Clinch. 10-9, 20-18 Fury.

Round three: Fury now advancing and letting his hands go. 1-1-2 rattles Chisora. Back to the corner. Chisora manages to circle out and swing some wild shots before getting clinched. Another big uppercut from Fury into the clinch. Short left hook kicks off another nasty combo. Clinch. Tight uppercut on the exit. Chisora’s a heavy bag halfway through the round, though he tries fruitlessly to swing back. Another big lunge, still can’t find the killshot. Fury with a combo on the ropes. Right hand downstairs as Chisora backs to the corner again. Clinch. Counter left uppercut and they tumble to the ground in the clinch. One more combo before the bell. 10-9, 30-27 Fury.

Round five: Chisora wades in with body shots. Off-balance on the exit. Fury lands some jabs and an uppercut from southpaw before clinching. Counter uppercut, clinch. Fury seemingly content to stay southpaw for the moment. Landing jabs. Now he switches and lands a 1-1-3. 1-1-2, counter uppercut. More good jabs and he circles around Chisora halfway through. Heavy shots from Fury in the corner. Chopping rights. Body shots from Chisora into the clinch. He stumbles out of the clinch. Fury uppercut, clinch. Jab-uppercut. 50-45 Fury.

Round six: Fury whiffs on a combo and ties up. Jockeying for position. Solid uppercut from Fury in combination. Double jab to 3-2. Another heavy cross. Chisora comes back with big swings into the clinch. Fury back to circling. Tight left hook, more jabs. Counter right, check hook. 1-1-2. Check hook. Chisora whiffs on an overhand, clinch. Fury goes southpaw and lands some right hooks. 10-9, 60-54 Fury.

Round seven: Combinations landing early for Fury. Chisora bangs the body and looks to follow with a left hook upstairs. Clinch. They trade body shots, clinch. Fury continuing to piece him up. Halfway through. More dominance. Hard 1-2, leaning against the ropes. Solid left uppercut. Combo in the corner. 10-9, 70-63 Fury.

Round eight: Do y’all really need blow-by-blow anymore? The script isn’t changing; Fury’s piecing him up at range and out-muscling him inside while Chisora wings the occasional haymaker that’s likelier to hit the back of the head than any meaningful target. There’s a good exchange in the center. Big 1-2 from Fury and a uppercut behind him. Clean 1-2 halfway through. Clinch on the ropes. Another 1-2. Uppercuts. Chisora tries to come back to the body. Fury landing most of the right hands he throws. Chisora body shots, gets clinched. Late right hand seems to stagger Chisora. 10-9, 80-72 Fury.

Round nine: Fury continuing to bludgeon Chisora. He pieces up Chisora, Chisora wades in, Chisora gets clinched, rinse and repeat. Fury with a good flurry in the corner. Shrugs off an overhand right and gets back to mugging. Clean jabs and right hands coming behind them. Chisora’s still game but there’s nothing left. Big left uppercut from Fury. They should stop this. 10-9, 90-81 Fury.

Round ten: Chisora comes out desperate, can’t make any meaningful connections. Fury running circles around him and landing most of what he throws. Halfway through. Fury’s beating the piss out of him. Chisora’s landing some body shots but there’s nothing behind them. The ref finally intervenes after another clean combo by Fury.

For more on “Fury vs. Chisora 3” and other boxing-related events, click here.