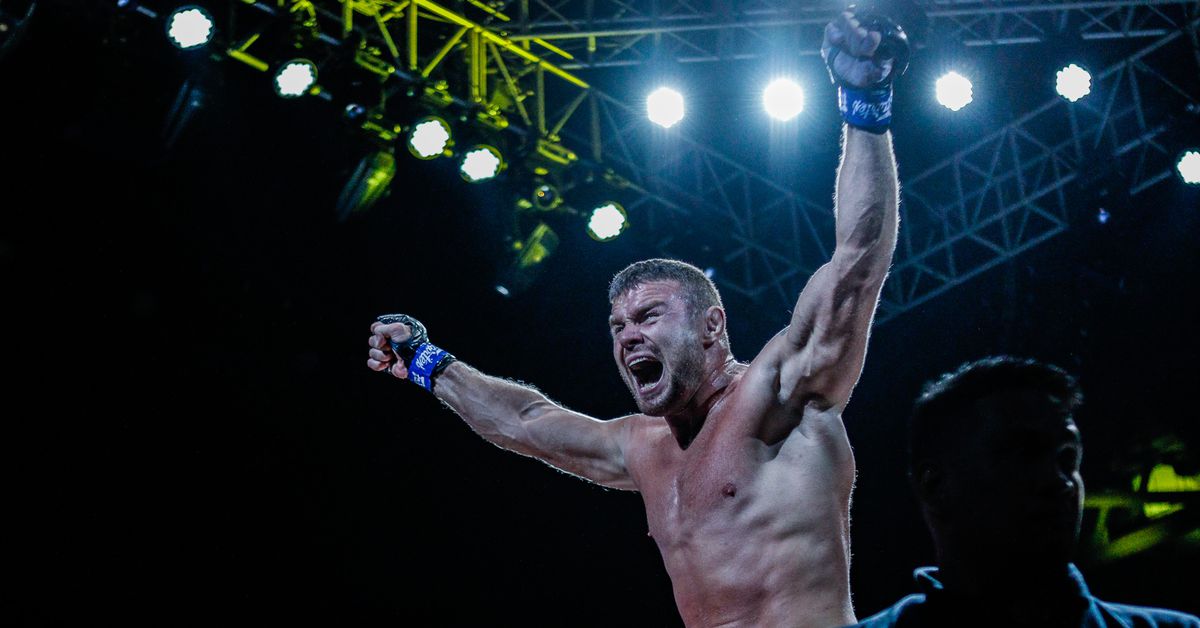 Anatoliy Malykhin picked up his second ONE Championship title with a first-round beatdown of Reinier de Ridder in the main event of ONE on Prime Video 5.

Malykhin hurt de Ridder early with heavy hands and didn’t stop until the No. 12 ranked middleweight fighter MMA Fighting’s Global Rankings was lying on his back, knocked out by a flurry of hammerfists. The official time of stoppage was 4:35 of the first round at Mall of Asia Arena in Manila, Philippines.

“I’m best of the best, world champion,” said Malykhin, who came into the bout as the interim heavyweight champion and picked up de Ridder’s light heavyweight (185 pounds) title. “I already knew I was going to win since yesterday, so I just wanted to thank all the people that supported. I knew the belt was going to be on the chest of my coach.”

The end was set in motion by a right hand that de Ridder took against the fence, where he backpedaled after taking several hard body shots and hooks. His initial charge toward the clinch and a throw setup, proved to be his downfall as it put him in range of Malykhin’s right hand. His natural predisposition toward ducking to the left only provided more targets for the challenger, who took full advantage.

De Ridder suffers the first loss of his professional career after 17 professional outings, while Malykhin, who also was awarded a pair of $50,000 bonuses, throws the rankings into disarray with his 12th straight win in an unbeaten pro record.

ONE Championship lightweight submission grappling champ Kade Ruotolo’s physical jiu-jitsu sent Matheus Gabriel plummeting to the canvas on several occasions. Gabriel’s guard play was good enough to keep him in the match, and Ruotolo rewarded him with several ankle lock attempts that he said produced pops in the joint. When no tap came, they went the distance, and Ruotolo earned the unanimous decision.

Roberto Soldic’s ONE Championship debut was cut short by an accidental knee to the groin that rendered him unable to continue against Murad Ramazanov.

Jackie Buntan avenged an amateur loss to Amber Kitchen with a unanimous decision likely sealed by a third-round knockdown. Buntan’s heavy shots overcame Kitchen’s lengthy kicks and pressure attack, and when she got inside, she made her presence known with fast hooks inside.

ONE Championship judges fights in their entirety, so it was confusing when one judge gave Dae Sung Park the nod over Lowen Tyanes. Save for a cut opened by an accidental clash, Park did little but get smothered and outgrappled over three rounds. Though he managed to stand at the end of the first and third, his leg kicks were his best offense against a constant threat of choke from Tyanes’ back control. Two of the three judges gave Tyanes the victory, so the interesting take on scoring didn’t change the outcome.

‘This is the happiest time for me’: Inside Fedor Emelianenko’s last hurrah in MMA
UFC superstars PART of the next TUF season? Conor McGregor and Jorge Masvidal announcing update!
Sources: Holloway to return vs. Allen on April 15
All-Star Cast On Hand To Honor Fedor’s Retirement
Paul Teases ‘Major Announcement,’ Tags White