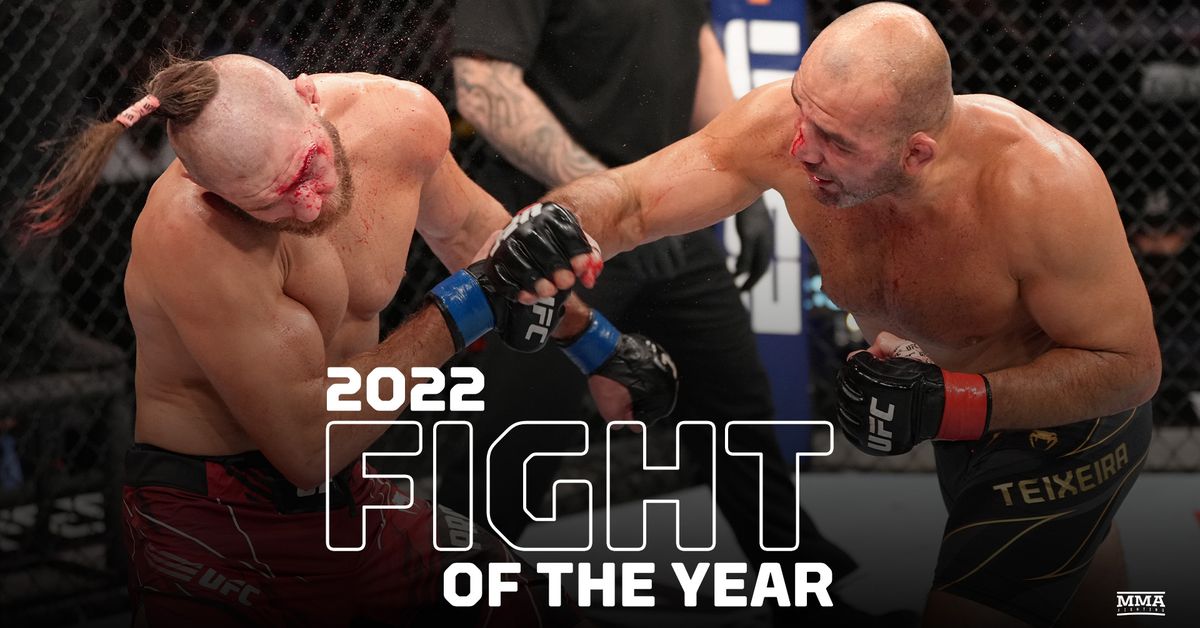 What if I told you that two men with 74 professional fights and 56 stoppage wins between them put on the most incredible fight this writer witnessed in person?

The No. 1 attraction in the light heavyweight division is, without question, Jiri Prochazka. To pull from history, Prochazka is Miyamoto Musashi reborn: A ronin with an unparalleled skill set for strategically ending his opponent’s life. He strides across the octagon with an aura akin to Kratos from God of War, destruction personified, yet contained under the guise of an almost monk-like figure. Across from him stood the reigning champion Glover Teixeira, a man with more UFC fights under his belt than Raul Rosa Jr. has years on this planet. You’d be hard-pressed to find a fighter more complete than the hulking Brazilian. With a Brazilian jiu-jitsu black belt and lunchbox-size fists, Texeira will crush the air from your lungs or put his fist through your orbital bone. Pick your poison, right?

Away they fought through madness and chaos, sweat flying and blood splattering with every blow. Both men pushing their bodies to the absolute limits. It was a buffet of brutality, and the fans at UFC 275 got their fill.

It was a buffet of brutality, and the fans at UFC 275 got their fill.

Away they fought through madness and chaos, sweat flying and blood splattering with every blow. With both men pushing their bodies to the absolute limits, Teixeira’s granite chin held up as he waded through hellacious barrages of strikes, while Prochazka met everything thrown at him with a devilish smile and a crimson streak trickling into his eye. As the rounds wore on, both men’s blistering strikes came forth balls of claymores shot out of a cannon. They were visibly exhausted, but they continued to sprint toward the UFC title.

Looking more like an unrelenting hurricane, Teixeira dragged Prochazka to the canvas, pulled out everything from his tool belt, and battered him from full mount with thudding ground-and-pound. But in case you forgot, Prochazka isn’t human. Not only did the Czech pugilist escape, he turned his fist into a driver and went after Teixeira’s head like a golf ball that had been teed up for him. With Teixeira suddenly looking more like a younger brother getting bullied than a UFC champion, the crowd rose to their feet as Prochazka snatched up the Brazilian’s neck, squeezed with the force of the old gods, and coerced the tap.

It was the culmination of four-and-a-half rounds of absolute anarchy. We had a new champion and a new frontrunner for the most incredible title fight in UFC history.

Gilbert Burns is the type of person to look a rabid wolf in the face and laugh. A man more than willing to test his skill set against any human being alive and enjoy himself doing it.

Khamzat Chimaev, on the other hand, seems to find pleasure in tearing the flesh off his opponents. We know precisely what Chimaev planned to do to Burns, and we were terrified at what we were about to witness at UFC 273.

So when these two welterweights finally collided, it’s no surprise they produced a beautiful car crash.

Chimaev, with a menacing smile plastered across his face, looked to end Burns early — and for a minute, it sure looked like we were about to witness a public mauling. Too bad Burns had other plans, as he squared up to Chimaev and punched him square in the face. It was like a scene out of Rocky, with Burns playing the diminutive underdog looking upon the blood leaking from his invincible foe and confirming that, yes, Chimaev is indeed human.

From there, Chimaev continued to find a home with his lightning-quick jab, while Burns, his face a swollen mess, whipped haymaker after haymaker towards Chimaev’s temple before going downstairs with body shots as the crowd erupted around them.

Forget technique. Forget the game plan. This spectacle was an all-out brawl that would make even Stone Cold Steve Austin raise a Steveweiser in approval.

It’s not often that the third fight between two champions lives up to the expectations of their first two meetings. But that’s what happened when Brandon Moreno and Deiveson Figueiredo threw down inside the Honda Center at UFC 270.

The two flyweights fought to an epic draw in their first bout, however Moreno claimed the UFC flyweight title with a thrilling submission win in their follow-up performance. In advance of the trilogy, Figueiredo threw out his entire playbook, uprooting his life and moving to Arizona to begin the pursuit of reclaiming his championship belt.

By establishing his low kicks, Figueiredo looked to whittle away at his Mexican rival early. Oozing confidence, Moreno waded forward with his arms down and picked his shots from a distance. But as the fight continued, both men began to pick up the pace, with Figueiredo sending Moreno tumbling backward to kick off Round 3. Popping back up, Moreno blasted the Brazilian with a flurry of strikes, much to the delight of the Hispanic audience in attendance. Smiling, Figueiredo silenced the crowd in response, sitting Moreno down with a fastball right between the eyes.

As the fight wore into the championship rounds, Moreno let loose everything from the chamber, and with one round left, the two men beat the soul out of one another in hopes of ending the other’s title aspirations. In the end, the damage from Figueiredo won him the battle and his 125-pound championship.

Now can we please fast-forward to the fourth fight at UFC 284? My blood demands it.

Are you a fan of high-level martial art competitions between two incredible athletes? Then boy, do I have the perfect fight for you.

Mateusz Gamrot and Arman Tsarukyan are, without question, two of the best fighters on planet Earth. In one of the many multiverses, we would be recapping a thrilling title fight between these two men here; instead, we’re reliving a 25-minute masterpiece to close out a UFC Fight Night on ESPN+.

The fight was reminiscent of two grandmasters dueling on the chessboard. Whenever Gamrot looked to impose his will, Tsarukyan met him with blistering counters before dumping him on the canvas. It was a grappling lovers delight as the two men whirled around like a Rubik’s Cube, entwined in a never-ending puzzle of turbulence. (Side note: Let’s normalize high-level grappling winning Fight of the Night.)

When the action remained standing, Tsarukyan continued to blast his Polish opponent with kicks. Oh, you thought Gamrot switching stance would alleviate the pain? Psyche! Tsarukyan just made him pay with more crippling kicks. Adjusting on the fly, Gamrot displayed superior boxing as he continued to hunt forward until he finally secured the takedown.

But even with his confidence soaring, Gamrot struggled to control his younger opponent as Tsarukyan plastered a spinning back kick right between his ribs.

With time winding down in their violent chess match, the two lightweights circled, each looking for the final nail in the coffin as they slung mallets at one another. Spinning backfists met with takedowns. Boxing combinations met with leg kicks. Scrambles met with submission attempts. It was as insane as it was beautiful. And while it was Gamrot who walked away with the victory, it was both men who won the hearts of millions.

It’s always a treat to fantasize over fights between two masters of their respective martial arts.

That’s right. You read that correct.

The welterweight main event between Thompson and Holland was literally a battle between karate and Kung Fu black belts.

With little to no worry about either man shooting for a takedown, would Thompson’s traditional karate be able to thwart Holland’s dynamic assault? How would Holland’s stylized approach to competition handle Thompson’s measured strategy?

As both men absorbed a frightening amount of damage, it was only a matter of time before one succumbed to their opponent’s attack. Holland dropped Thompson early, only to be met with a shin to the jaw in response. The two artists kept pace early, but Thompson inevitably pulled ahead as Holland struggled to deal with his foe’s hand speed and kicks. With blood splattered across their bruised craniums, Holland’s body faltered as Thompson uncorked a constant flow of damage.

In the end, Holland’s corner saw enough and threw in the towel, giving Thompson his first win in two years and giving fight fans one of the most exciting main events of 2022.

Here is how the voting for MMA Fighting’s 2022 Fight of the Year played out.