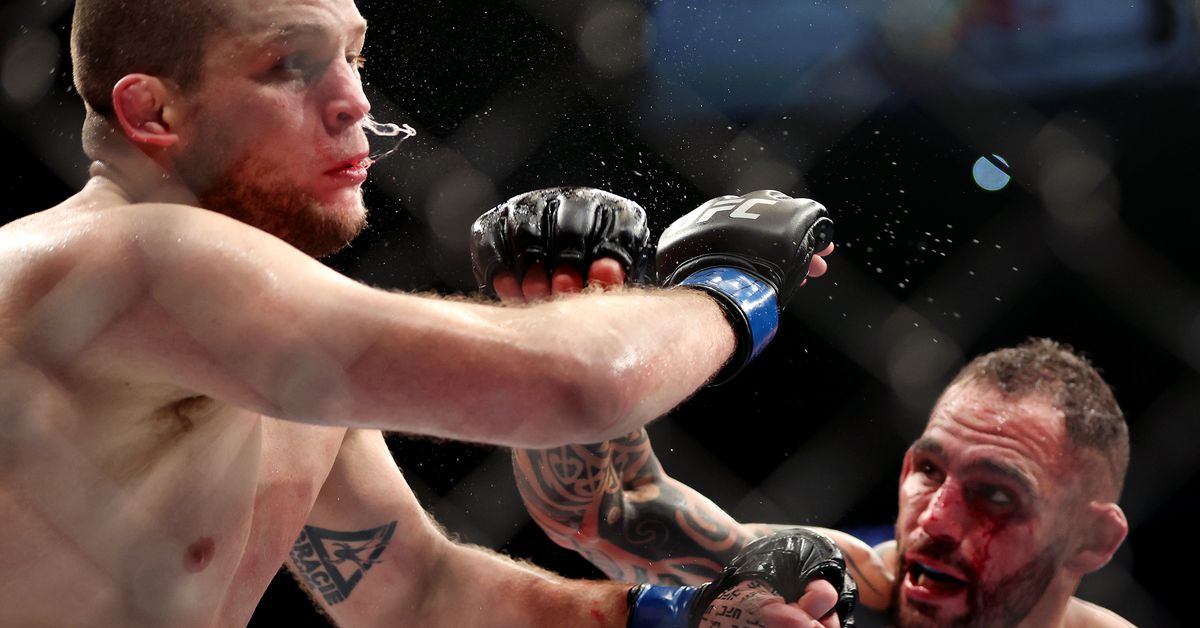 Coming off two straight losses, Santiago Ponzinibbio approached his fight at UFC 282 with a do-or-die mentality. He needed a win and there was no other alternative he’d accept.

Unfortunately, disaster struck just days out from his return after former UFC champion Robbie Lawler was knocked out of their fight with an injury, which left Ponzinibbio in limbo without an opponent. Hours later, the UFC came calling with an offer to face Alex Morono in a 180-pound catchweight fight with just six days remaining until the event.

“Everything changed,” Ponzinibbio told MMA Fighting. “They changed the opponent. I had Robbie Lawler, a southpaw, and they booked me [against] a young guy who won eight out of his last 10 fights, four victories in a row. If we’re talking about the names, Robbie Lawler being an ex-champion is a bigger name. But if we’re talking about momentum in a career, that’s Morono. I think Morono has the momentum and I think I took a more difficult challenge.

“I needed a victory. Everything changed for me at the last minute, they give me more stress for sure, but I believe in myself. I’m a fighter. I believe I have the potential to do that and I took the fight right away.”

While time was on his side after putting together a full training camp in preparation for the fight, Ponzinibbio was stunned at Morono’s fast start as the American set the pace early with an aggressive game plan. Morono appeared to be landing the better punches and he put Ponzinibbio on his back foot, which was not what the Argentine expected.

Still, Ponzinibbio felt he made a good showing for himself, especially in the second round, although he couldn’t be certain — and after losing two split decisions in a row, there was absolutely no room for error this time around.

Despite feeling that the fight was tied, Ponzinibbio’s coach told him otherwise in rather emphatic fashion during the one-minute break before the third round.

“I asked to my main coach, ‘How do you think the fight is going?’ He told me 2-0,” Ponzinibbio revealed. “My coach told me we are two rounds down. Two rounds for [Morono]. We’re down. We need to do something! I said, ‘OK, let’s go!’ I went into the third round to put the hard punches to finish the fight. I know if I connect, I can finish. Anyone in this division, if I connect hard, I can finish them. This is what I did.

“It’s not easy. It’s a lot of information buzzing around your head,” Ponzinibbio added. “I’m coming off two losses, I’m hurt, I’m tired. It’s difficult to take this guy [out], he moves well, but that’s the point where we’re hurt and we use it. That’s the point where we say, ‘F*** it, I don’t care if I’m tired. I’m going to finish this guy. This is what I’m going to do.’”

The motivation from his coach paid off as Ponzinibbio went head-hunting and delivered a vicious knockout in the third round, which staved off a potential third defeat in a row. Two judges scoring the fight had Ponzinibbio losing both rounds, just as his coach predicted, so he had to get a finish in order to earn the victory.

The impact from his fight-ending right hand was so severe that Ponzinibbio thought he might have broken Morono’s jaw with the way Morono’s face contorted from the punch.

“I hit him with the right hand and I saw the face that he made,” Ponzinibbio said. “He’s in pain. I looked at him and the mouth is going to the side. I threw the second right hand and he fell to the floor and I was ready to follow up with more punches, but the referee stopped the fight. I felt in the moment when I land my right hand that I was ready to finish the fight and I did.

“I saw the jaw go to the side and I thought maybe I broke it. I remember this very well. I’m trying to connect with one punch. I threw my strong right hand and I saw his jaw move to the side. I threw another right hand behind it and he fell to the floor.”

It was a satisfying win that got Ponzinibbio back on track and put that two-fight losing streak behind him. UFC president Dana White praised his performance afterward, especially with the way he reacted in that third round.

Now Ponzinibbio is anxious to move forward with hopes that the UFC will allow him to build on the momentum he started with this fight as he takes aim at ranked competition again.

“I want to fight with somebody in the top 10 to have an opportunity soon to go for the belt,” Ponzinibbio said. “A really fun fight we could do in the top 10 is Vicente Luque. He’s a good striker. We can make a bonus fight for sure. Stephen Thompson is a great fight. We have a lot of names in the division. We will see what the UFC is thinking but I’m very excited.”