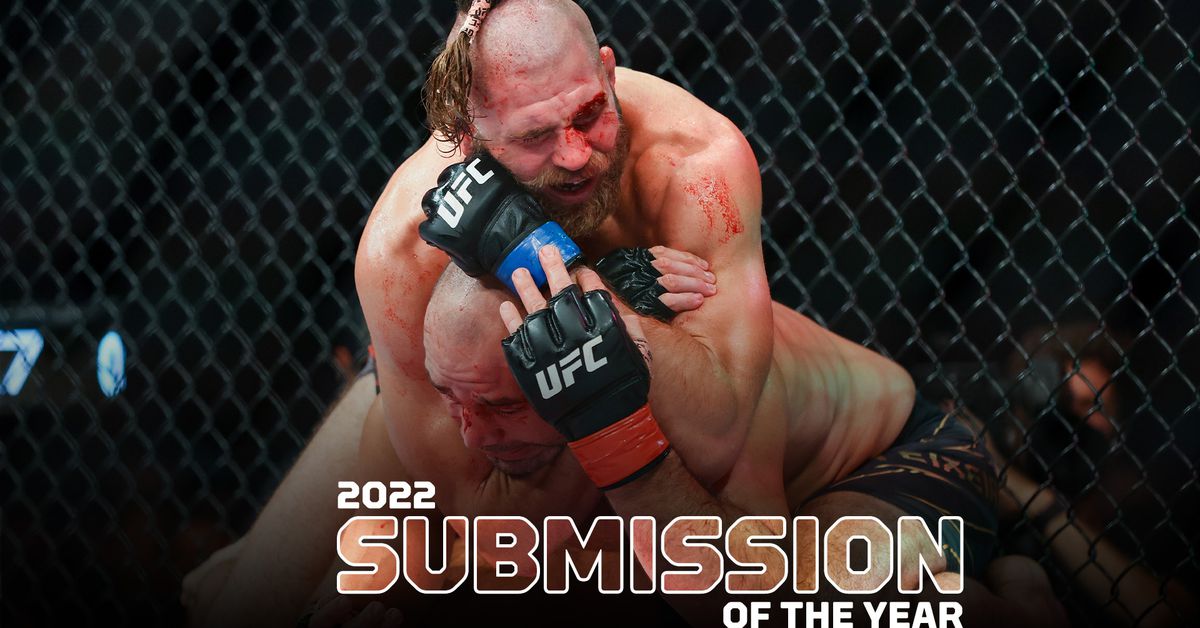 When it comes to picking “Submission of the Year,” MMA Fighting staffers are a tempestuous bunch in a stormy sport. Sometimes, they lean toward novelty. Others, they go for the magnitude of the moment, the who of who snagged the submission and who tapped when so-and-so was on the line. Then there’s the “ow” factor, when a limb is bent to an unnatural conclusion in a way that requires praise (and sympathy for its victim).

We’ve got to go with what we’ve got. It’s tough to make a person submit in a high-level fight, so we take the best mix of criteria. This year, that’s the UFC 275 headliner between Jiri Prochazka and Glover Teixeira, a light heavyweight title fight that drew six first-place votes.

Rest assured, technique is not the primary driver of that choice. The rear-naked choke is the Budweiser of MMA submissions: bland, unoffensive and widely distributed. Prochazka didn’t even apply it to the letter of the law, forgoing hooks for the triangle of the neck. But in this case, that’s part of its appeal. It wasn’t the spectacular grappling he displayed against Teixeira. It was the tenacity of his approach, the new wrinkle in his game, the sudden reversal of fortune that led him to the fight-ending position, the gold on the line, and the moment he got the tap.

Prochazka vs. Teixeira was simply one of the most exciting title fights in the history of the light heavyweight division, a faith-renewing contest of wills that left everyone breathless, which is why it also captured “Fight of the Year” honors.

Of all the people you’d think were suited to submit a submission specialist in Glover Teixeira, it wasn’t Prochazka. Only last year, the Czech fighter had landed the No. 4 spot on MMA Fighting’s “Knockout of the Year” for a spinning elbow destruction of Dominick Reyes. His thing was punching trees and wrecking faces. The odds on him knocking out Teixeira, according to Draft Kings, were -135, while the odds of a win by submission were +1600. The line got much more attractive when it came to Teixeira winning by submission; at several points during the fight, it looked like the +350 on him tapping out the challenger could be a winner.

Then again, Prochazka’s face kept getting in the way. Just minutes before he was winning, he was losing, and badly, by getting punched in it repeatedly. Even after an ill-advised takedown, Teixeira had achieved mount with two minutes remaining. He was in the home stretch, in favored territory. All he had to do was hold on. But Prochazka refused to accept his fate and reversed position. Technique was secondary to pure heart and determination, and Prochazka had more in deeper water than his older opponent. With just 28 seconds remaining in the fight, Prochazka pulled off the biggest win of his career on the biggest stage of the sport in a fight he was losing on two of three scorecards.

Forget what Prochazka says about his performance, that’s a winner.

History has an irresistible ring to it, especially in the UFC, and Jessica Andrade’s entry into the record books earned three first-place votes.

Arm-triangles are no special thing when your opponent is on the ground. When they’re right side up, bragging rights are in order. Amanda Lemos had tapped exactly zero times before she stepped into the cage with Andrade, but she quickly found herself running out of air as the former champ muscled her to the fence, setting up the standing arm-triangle. Lemos could only gasp in panic as Andrade tightened the submission hold, a boa constrictor finishing off its prey, stepping into UFC history.

The last time a female fighter pulled off the move in a major promotion, it was a decade earlier at Bellator 83 in Atlantic City, N.J. Jessica Eye’s career took off after she stunned inaugural strawweight champ Zoila Gurgel in less than one minute with the choke.

Andrade didn’t need any help establishing herself as one of the most dangerous fighters in MMA. But she certainly reinforced what everyone already knew: There is no safe place to be if you are in the octagon with her.

The thing that stands out about the arm-triangle Islam Makhachev applied to Charles Oliveira is not what immediately preceded it.

A right hook had sent the Brazilian to the canvas after an ill-advised jumping switch knee in the second round of the fight for the vacant UFC lightweight title. But it wouldn’t be an Oliveira fight if he hadn’t gotten clipped trying some high-risk move. What made his run so special was his ability to recover and quickly turn the tables on his opponents. Just when they thought they had him, they were tapping out or inviting referee intervention.

Oliveira really tried to escape. When Makhachev set up an arm-triangle, it wasn’t particularly sneaky. There was just no getting out of the vise-like grip that had been honed through years of training with one of the best to ever do it, Khabib Nurmagomedov, and sharpened on a 10-fight winning streak that included four finishes.

For others, going to the ground with Oliveira would be the dumbest idea. But Makhachev almost immediately put him there, showing the uncrowned champ he had no fear of the fate so many others had met on their parallel paths. Oliveira’s was one of the great comeback stories of the sport, a very beatable fighter finding a way to convert missteps into triumph. Makhachev just didn’t make many mistakes on his way to the top. His path to the title was much the same as the way he handled Oliveira, with an air of inevitability.

That’s how the UFC fighter with the most submission wins in history becomes the victim of a standard arm-triangle.

Stevie Ray wasn’t the first PFL fighter to knock the luster off Anthony Pettis, but his Twister submission of the former UFC lightweight champ was by far the most flashy.

Pettis had just about knocked Ray off his back after a strong opening led the Scottish fighter to seek better luck on the canvas. A sharp twist out of a body triangle put Ray on his opponent’s flank, but it also put him right in position for the spinal twist that so few are able to complete.

The move popped out the rib that had troubled Pettis in previous fights; he called it a “dumb move” that allowed Ray to get the highlight-reel submission. But that wasn’t the first time Ray had pulled off a spectacular move on the canvas. Before Paddy Pimblett was the UFC’s golden boy, Ray had tapped him with a flying scissor takedown and a heel-hook finish in a 2019 grappling match.

To prove that beating Pettis was no fluke, Ray rematched him five weeks later and won on points to advance to the 2022 PFL Championships.

A spinning hook-kick isn’t the best entry into submissions, but Oliver Enkamp made the most of the situation when he faced Mark Lemminger at Bellator 281. Before Lemminger realized he was in danger, Enkamp snaked his left leg under his opponent’s torso and used it for a triangle of the neck. Locking his arms around Lemminger’s neck, Enkamp’s squeeze provided the leverage to complete what was originally called a rarely-seen buggy choke. Instead, Enkamp had to settle for the slightly more common — but still spectacular — inverted triangle choke and a future booking with the fighter tied for fifth place on this year’s list.

In another example of an opponent caught unaware of obscure techniques, Dante Schiro didn’t realize Luca Poclit could trap his head in an inverted arm-triangle. Before he could pull free, Poclit had applied enough pressure that he went unconscious. Schiro was probably out for several seconds before the referee realized what had happened and broke them up, sending both fighters to their backs after the awkward entanglement. Poclit had just shown the world a new submission — the Lucanator, as it was officially dubbed — and Schiro was in a far away land, his eyes staring vacantly into the ether.

Here is how the voting for MMA Fighting’s 2022 Submission of the Year played out.