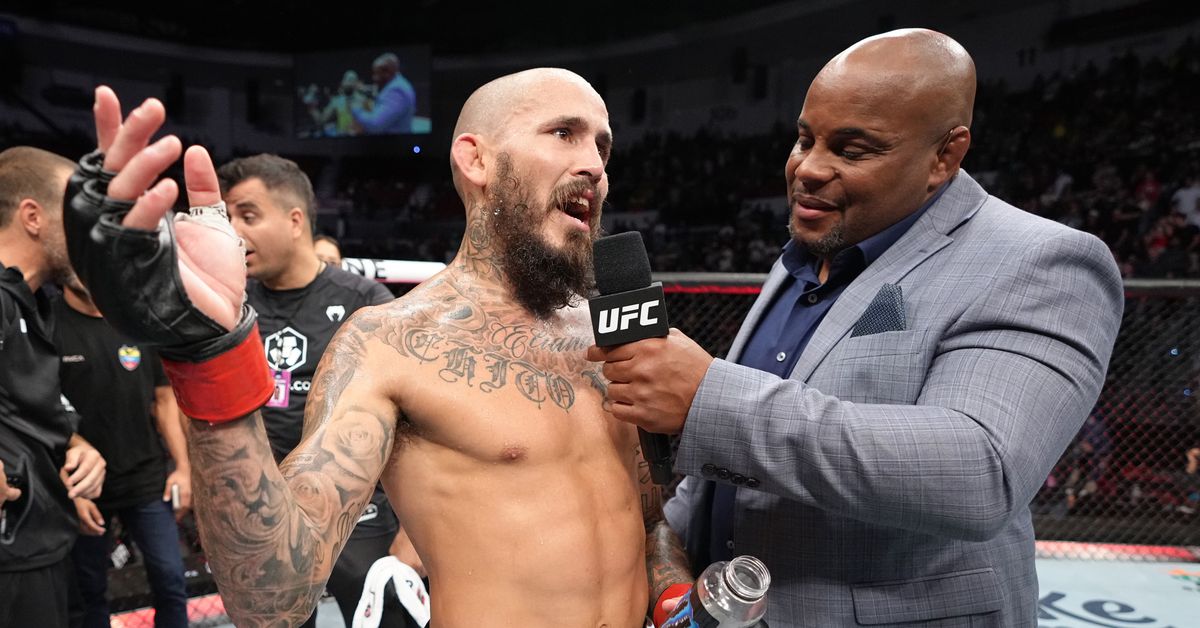 Marlon Vera thinks Aljamain Sterling isn’t playing by the spirit of the rules.

One of the biggest bantamweights in the division, Sterling regularly cuts an enormous amount of weight to get down to the 135-pound limit, and after title defense against T.J. Dillashaw at UFC 280, Sterling revealed that he put back on 40 pounds in the week following the fight. And while that sort of massive weight fluctuation is perfectly legal according to the Unified Rules of MMA, “Chito” Vera believes it goes against the spirit of the game.

“Cutting that much weight is cheating to me,” Vera told Michael Bisping. “You’re kind of a p**** if you cut that much weight, because you want to be bigger and stronger. Because he really doesn’t hurt nobody, but he makes you carry his weight, takes you down. I’m 155 pounds in or out of camp. I feel like that’s a natural 135-pounder, and I’m still thinking I cut a s***load of weight, because 20 pounds is a lot. That motherf***** weighs like 170, 180 pounds when he’s eating f****** God knows what. Yeah, you can make the weight [but] that’s why he’s been KOed unconscious, because of the amount of weight he cuts. If you touch him, he might go down.”

Sterling’s weight has again become a topic of conversation as the UFC attempts to iron out a timeline and contender for the next bantamweight title defense, with the champion even teasing a possible move up to 145 pounds in his near future. All signs currently point to former champion Henry Cejudo being next in line and unfortunately, that leaves Vera still as the odd man out. Instead “Chito” will now face Cory Sandhagen in the main event of a Fight Night card on Feb. 18 in Las Vegas. Currently ranked No. 4 in the world according to the UFC, Vera believes that a win over the No. 5-ranked Sandhagen will finally get him the title shot he’s been chasing, regardless of what happens to the rest of the division.

“1,000 percent,” Vera said. “The guys that I have been beating are either former world champions or top-five guys. Probably for myself I have a little longer road, but it is what it is. It’s life. Some people have an easier road, a shorter road, I have a longer road. At the end of the day, life is hard for everybody, but I really believe with a solid win on this guy, I’m fighting for the belt, regardless of all these hype things, who has the belt, who has more views, who has less views. It doesn’t f****** matter. If you go in there and put the guy’s lights out, the views come your way. So I’m just plugging away.”

Vera’s run recently has been spectacular, with four straight victories since losing to Jose Aldo in 2020, including highlight reel head kick knockouts of Frankie Edgar and Dominick Cruz. The problem, at the moment, is the glut of contenders at the top of the bantamweight ranks, with Cejudo and Sean O’Malley jockeying for position, and even Merab Dvalishvili waiting in the wings. It’s a problem that could best be solved by people simply fighting it out to determine the next contender, instead of waiting for their turn at the title, so says “Chito.”

“Everything is a matter of they all start playing with dates and they all start holding position,” Vera said. “That’s why when they called me for this fight I was like, ‘Yeah, I’ll take it.’ I don’t see it as a negative thing, I don’t see it as a going backwards thing. It’s just another day in the office, putting in more reps and getting more experience. If I’m healthy, why sit down? There’s a bag of money to go and grab, so why not? Keep advancing. And I’m beating legit guys. It’s not like they’re building my career and s*** like that. So the experience I have right now, you can’t buy that, you can’t get that. You can only get that by walking the walk. I’m getting calmer in there, I’m getting better in there, while all these guys just act like a bunch of c****. I’m just going to keep getting better and by the time I get to them it’s going to be night-night.”

Bellator vs. RIZIN: In Focus.

Bronson vs du plessis must be a fun fight to watch!!! Du plessis is not the most technical fighter but he’s strong and have great heart. Let’s see if he can beat a veteran ufc contender!!! #ufc

Holding my baby in one arm and USADA needle in the other. Blessed to be back on the circuit. I was up at 6 AM anyway. #cleanAthlete

Thanks for reading and see you tomorrow!

Did we get Submission of the Year right?