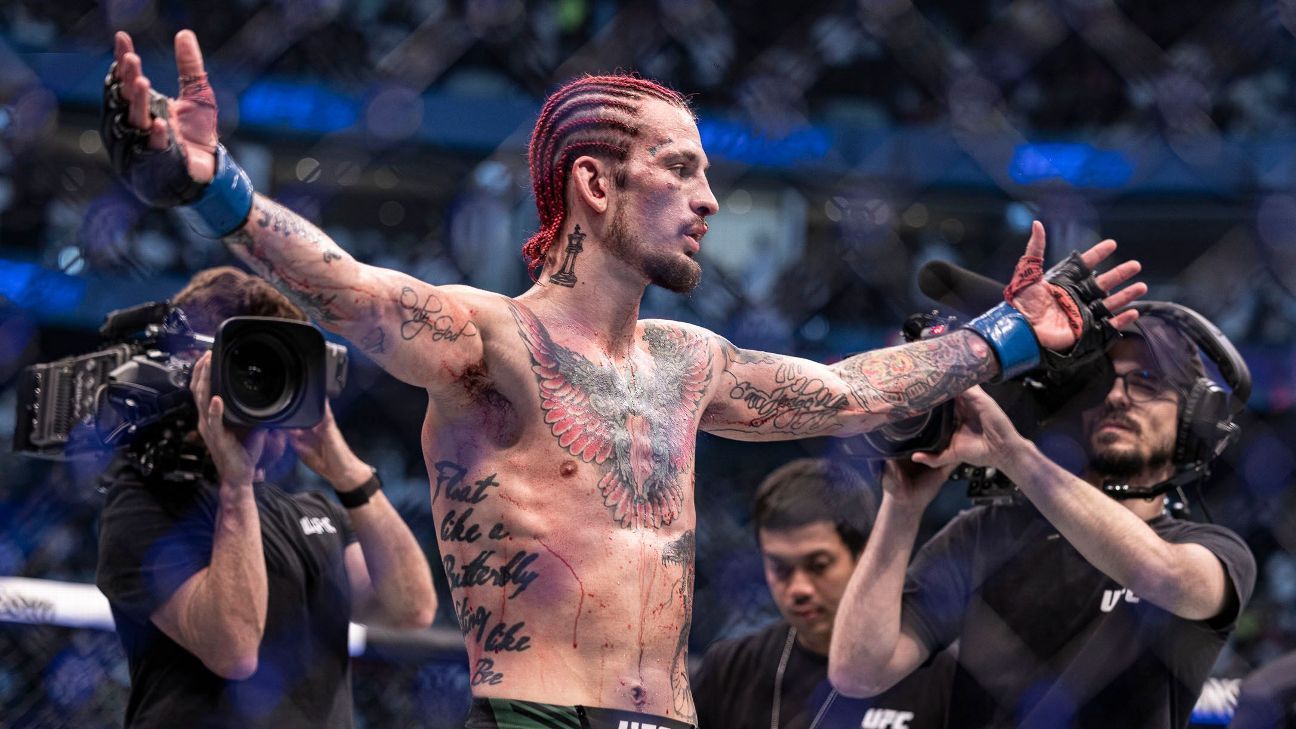 Seven appears to be the lucky number. Or unlucky, depending on whether or not you start the year with a UFC championship belt wrapped around your waist.

Exactly a year ago, I made predictions for ESPN on what fighter would be champion at the end of 2022 in each of the 12 UFC weight classes. In doing my homework for that story, I realized something that blindsided me: Seven of those titles had changed hands in 2021.

Why was this so surprising? I don’t know. I guess I view champions through rose-colored glasses, attaching an impeccable invulnerability to them as the best of the best. And while I understand that even the best lose sometimes, I simply was not prepared to accept that more than half of the UFC’s champs at the start of a year could be also-rans by the end of it.

But even after I factored that hot-potato revelation into my thinking, my prediction story named just four fighters I expected to end 2022 in possession of belts they did not own at the dawn of the new year. Four was a far cry from the previous year’s seven, but this was all the visionary foresight I could muster.

Then 2022 played out, and how many UFC divisions saw champions at the start of the year get bumped from the top of the mountain?

As we look forward to 2023, I’m here again to make predictions on who’ll be the UFC’s champs next New Year’s Eve. And now that I’m equipped with two years’ worth of numerical evidence, I’ve finally come to grips with the fact that I would be wise to come up with seven names. So here goes:

Did I mention that not one of the four fighters I predicted to end 2022 as new champions actually did so? Procházka came closest, though. He won the title in June, choking out Glover Teixeira in Round 5 of my fight of the year, and was slated to defend the belt in a rematch earlier this month. But Procházka injured his shoulder several weeks ago and not only pulled out of the fight, but also vacated his title. The uber-creative Czech will be out for much of 2023, recovering from surgery, but says he’s been promised a title shot upon his return. I think he’s the best 205-pounder out there, so I’ll pick him to get the belt back — and keep it this time.

I started this list with light heavyweight, because it’s the one UFC division with a vacancy in the penthouse, meaning it’s guaranteed to have a new champ at year’s end. (Well, not guaranteed — we all saw UFC 282 end with no “And new …” announcement — but what are the chances of lightning striking the same gold belt twice?) The intrigue among this division’s elite is over whose head will fit the crown with so many trying it on. In less than three weeks, no fewer than five fighters — Procházka, Teixeira, Jan Blachowicz, Magomed Ankalaev and Jamahal Hill — were booked in 205-pound title fights. At this point, Dana White is manipulating the pecking order on a whim. So good luck, Jiří, in trying to hold the UFC poobah to his “promise.” Still, if I have to pick someone to finish 2023 on top, it will be Procházka.

So all I’m going to do here is list former champions poised to climb back to the mountaintop, is that it? Hey, you’ve got to do what you’ve got to do to hit that magic seven. Adesanya will begin 2023 not in possession of the championship he owned from 2019 until last month, when Alex Pereira dethroned him. “The Last Stylebender” was in control of that fight right up until he wasn’t — when Pereira knocked him out midway through the fifth round. If you include two kickboxing bouts, it was the third time Pereira defeated him. But if they meet again in the MMA cage, I like Adesanya’s chances of walking out with his old strap back.

Yes, another ex-champ. And yes, another victim of a fifth-round KO in a fight he was winning. (That makes it three champs going down in a Round 5 this year. That must be why they call Rounds 4 and 5 “the championship rounds,” no?) Usman had an even bigger edge in his ill-fated August title defense against Leon Edwards than Adesanya’s fight with Pereira. But in the final minute, Edwards landed a Hail Mary head kick that jarred the championship loose. Usman was the No. 1 pound-for-pound fighter in the world at the time of that stunner, and I favor him in the rematch, expected to take place in London in March.

As recently as October, when asked to opine on whether O’Malley becoming champ in 2023 was fact or fiction, I went with fiction. But I’m rethinking that. “Suga Sean” says he expects his next fight to be for the belt, and if that’s the case, he will enter the cage a confident man, based on his eye-opening, chest-thumping performance against Petr Yan in October. Based on the champ’s sizable advantage in grappling, O’Malley would be a significant underdog against Aljamain Sterling. But they’d be starting on their feet, and for as long as O’Malley can keep the fight standing, he would be the one with the upper hand. I’m not exactly secure and unwavering with this prediction, but I think the man with the Technicolor hairdo has shown he’d have a legitimate shot at gold.

A year ago, in forecasting that Pantoja would be champ by the end of 2022, I noted that “the whole purpose of this end-of-year exercise is for me to go out on a limb, so I’m going to shake the tree with the flyweight who in recent times has most impressed me.” And then Pantoja fought just once this year and didn’t get even a whiff of the title. But I’m stubborn enough to continue clinging to the tree limb I’ve already shimmied out on. Pantoja is a dynamo, a finisher who’s poised to take over. I mean it this time.

Amanda Nunes won the UFC belt at 145 pounds in 2018, and in the four years since then, she has defended the title all of twice. The UFC is so dismissive of this division that it doesn’t even have rankings — because the roster doesn’t have enough featherweight women to fill out a top 10. As I continue to inch my way toward predicting the demise of seven champions, I’m going to twist that concept just a little here by saying that in 2023 the UFC will finally put this inactive division out of its misery.

Sorry, I can’t conceive of a seventh new UFC champ-to-be in ’23. I tried examining every weight class and its top 10, turning them all inside-out, upside-down and squinting from every angle. But as I see things unfolding, the rest of the current titleholders seem secure for another year. Of course, that’s precisely what I said a year ago about Usman and Adesanya. What could go wrong?

The rest of the weight classes:

Heavyweight: I suppose this division can produce No. 7, as the champ, Francis Ngannou, is unsigned. So if he were to move on from the UFC, some other big guy would get to fill the void. Ciryl Gane? Stipe Miocic? The going-on-three-years-inactive Jon Jones? How about USADA-sidestepping Conor McGregor, if he can cut to 265? I believe the speculation ultimately will prove moot, though, as Ngannou won’t find a landing spot better than the Octagon. And if he stays, I do not envision anyone beating him in 2023.

Lightweight: Islam Makhachev has been a champion-in-waiting for years, and he finally won the belt in October, making it look easy against Charles Oliveira. His first title defense is a February superfight against featherweight champ Alexander Volkanovski, and I don’t imagine that will slow Makhachev down. Honestly, I see only one threat to his reign: if the UFC books him in a four-on-one fight against Paddy “The Baddy Decision-y” Pimblett and three stargazing cageside judges.

Men’s featherweight: If Volkanovski does win the 155-pound belt, his days could be numbered at 145. Or, if he loses badly to Makhachev, that could shake his confidence as he shrinks back down to his domain. But based on how Volkanovski has handled even the most legendary challengers during his featherweight run, I suspect he will remain the gold standard for at least another year.

Women’s bantamweight: Nunes is the UFC’s only two-division champ, but if my goodbye-to-145 prediction proves to be correct, she’ll have just her 135-pound reign to manage. And even though it was only about a year ago that we watched Nunes lose a title fight (before seizing the belt back from Julianna Peña in July), I don’t see that happening again in the next year or so.

Women’s flyweight: In my prediction story a year ago, one of my four candidates to win a title was Valentina Shevchenko — at bantamweight. Peña was the champ at 135 pounds at the time and Shevchenko ruled 125 and was the pound-for-pound No. 1, so why not go for champ-champ status? Well, it didn’t happen, and there have been no reports of that being in the works. So I’m not going there again. Instead, just banking on Shevchenko putting in another year of flyweight dominance.

Strawweight: The second reign of Zhang Weili started just last month and it will not end any time soon. I am confident about that, despite the 115-pound division being one of the most competitive in the UFC. Zhang can do it all — including doing whatever is necessary to avoid reliving the sting of having a hard-won championship slip from her grasp.