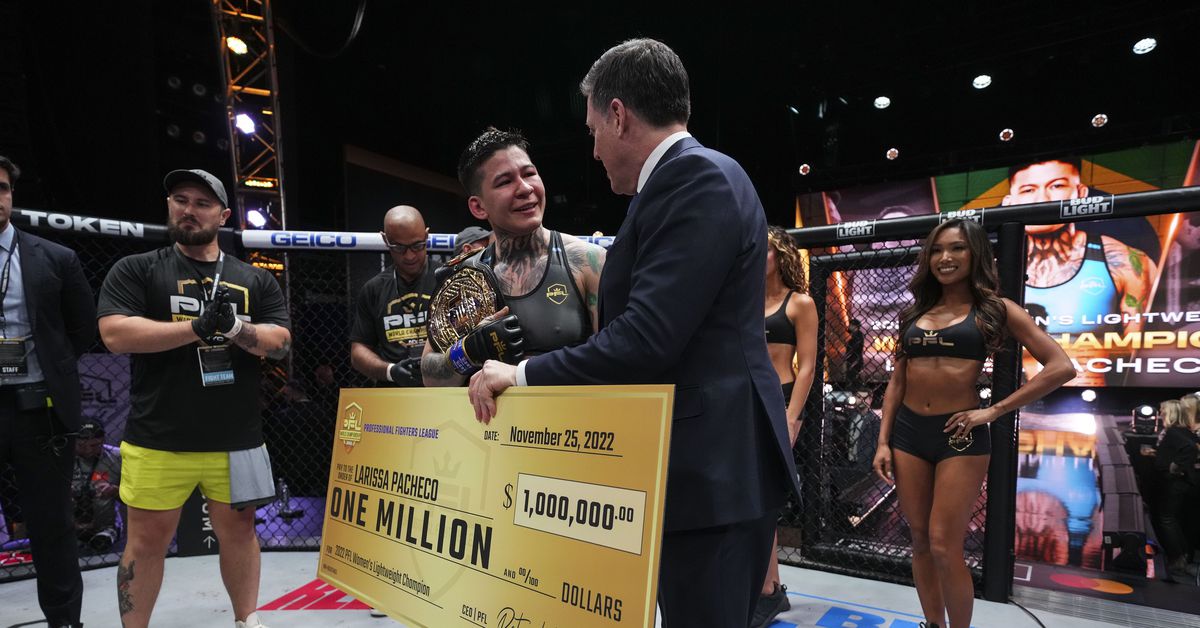 2022 was a wild one for the sport of MMA, and so with the year now officially in the rearview, MMA Fighting takes a look back at what happened in the major promotions, where they succeeded, where they failed, and what’s in store for 2023.

PFL By The Numbers

In 2022, the PFL hosted 10 events in its season and eight Challenger Series events in support. All-in-all, the PFL put on 142 fights, yielding 67 decisions, 50 knockouts, 23 submissions, and two no-contests.

Now several years into its restructure, the PFL is a mostly well-oiled machine, and the nature of their season-based format is such that its year will almost always be defined by the Championship event it concludes with. Fortunately for the PFL, the 2022 Championship was the best in the promotion’s history.

Heading into the 2022 Championship, there were a ton of questions surrounding the promotion.

The event marked the PFL’s pay-per-view debut, something many, myself included, were highly skeptical of, and it carried with it a host of other problems. Seven fights on the main card, including six title fights, created an opportunity for things to quickly spiral into a five-hour main card. The MMA Gods could have bought chaos. Instead, they were merciful to the PFL and the viewers, delivering four excellent main card finishes and, in general, a bunch of high-quality fights with some great feel-good storylines.

Brendan Loughnane delivered on all his promise, Rob Wilkinson continued his run of highlight-reel victories, and Oliveir Aubin-Mercier finally got the signature moment he had been missing. True, the MMA Gods still got their chaos, with Larissa Pacheco authoring one of the biggest upsets in history by beating Kayla Harrison, but even that promised benefit for the promotion. The upset turned the Championships from “a solid night of fights” to a true moment for an organization desperately in need of one. Plus, it set up a marquee fight between the two next year, and finally gave the PFL’s biggest star a rivalry to build on.

The idea that one event, one fight, one moment can change the course of a promotion’s destiny is mostly post-hoc mythmaking. The UFC did not become a global powerhouse because Forrest Griffin and Stephan Bonnar duked it out in the finals of The Ultimate Fighter 1 — the show was already extremely successful and would have continued, be it on Spike TV or elsewhere. But it was an emphatic punctuation for what had come before and now serves as one of the seminal demarcating lines in MMA history: before and after Griffin vs. Bonnar. The 2022 PFL Championships is not that level of seismic event, but it still marks a turning point for the promotion and the sport: the PFL is a legitimate player, and it’s here to stay.

While many would argue that having its biggest star – one the promotion has to some extent built around – lose to a woman she’d already beaten twice constituted a bad outcome for the PFL. But I’m choosing to view this as an opportunity. Instead, I believe the PFL had three major problems in 2022.

First, the Wales debacle. The PFL’s late-notice decision to host an event in Wales was its most public failing of the entire year, causing Magomed Umalatov and Denis Goltsov to be unceremoniously removed from the playoffs because they could not get a visa. Imagine if the NFL decided the wild card round would suddenly be played in Japan and then, for whatever reason, the Chargers organization as a whole couldn’t get a visa, so the NFL just decided to kick them out and insert the Steelers.

People would, justifiably, riot. The idea of an MMA “league” relies heavily on notions of meritocracy, and so the PFL setting fire to that for no discernible reason was extremely poor all the way around.

Second, and along similar lines, the structure of the PFL still needs work. Overall, league style format is fun, and it’s an excellent way to differentiate the PFL from all the other promotions. But the way things are ultimately enacted kind of undermines the core concept. Having a a two-fight “regular season” really strains the definition of “season,” and when alternates came come in and make the playoffs with only one win, it hurts the promotion’s credibility.

Add to that the way the scoring and tie-breaker system is deeply flawed — Klidson Abreu went 2-0 in 2022 and beat Renan Ferreira, but Ferreira made the playoffs and Abreu didn’t because Ferreira had a first-round KO, which the tiebreakers favor — and there starts to be a sense of “we are just winging it” going on.

But while both of the above things are bad, particularly in the context of a $1 million purses being won and lost, they are not the biggest problem the PFL had in 2022. That remains, as it has been for some time, their overall lack of talent.

At the end of 2022, the MMA Fighting Global Rankings only had one PFL fighter currently in the top-15 of their weight class – featherweight champion Brendan Loughnane – and only two in the pound-for-pound rankings, Harrison and Pacheco. For a promotion with designs on being the No. 2 in the world, that is startlingly low. And while the overall product is solid and the fights tend to be good, at the end of the day this sport still runs on stars to draw interest, and the PFL is lacking in that department. Fortunately for them, that could be changing.

2023 figures to be a very interesting year for the PFL. The promotion has some lofty goals, including expanding its PPV footprint, launching a European league, and adding men’s bantamweight and women’s flyweight divisions. All of those are big steps forward that will most likely improve the product, and yet, they still aren’t the most exciting thing in store for the PFL this year. That designation goes to talent acquisition.

The PFL made strides in acquiring better, more high-profile talent last year with the signings of fighters like Marlon Moraes, Aspen Ladd and Shane Burgos, and many more figure to be in store for 2023. I have repeatedly made the comment that Ante Delija becoming a millionaire should cause any fringe top-15 heavyweight to reevaluate what they are doing in the UFC, and while that’s somewhat of a joke, it’s also very real. One million dollar purses are incredibly rare in MMA, and plenty of UFC fighters have taken notice of what the PFL is offering.

More high-level fighters will continue to make their way to the PFL in 2023, which will in turn make the promotion that much more fun to watch.

Anthony Smith vows to never miss weight again after coming in heavy as UFC 283 backup
Conor McGregor accused of attacking woman on his yacht in July: ‘He is a criminal’
Ismael Bonfim happy to fight on same UFC shows as brother if the wins keep coming
Alexander Volkov Vs. Alexander Romanov Booked, Twitter Reacts
UFC fans WILL BE UPSET, after UFC superstar out of UFC 286 PPV, Jon Jones and Ciryl Gane reactions