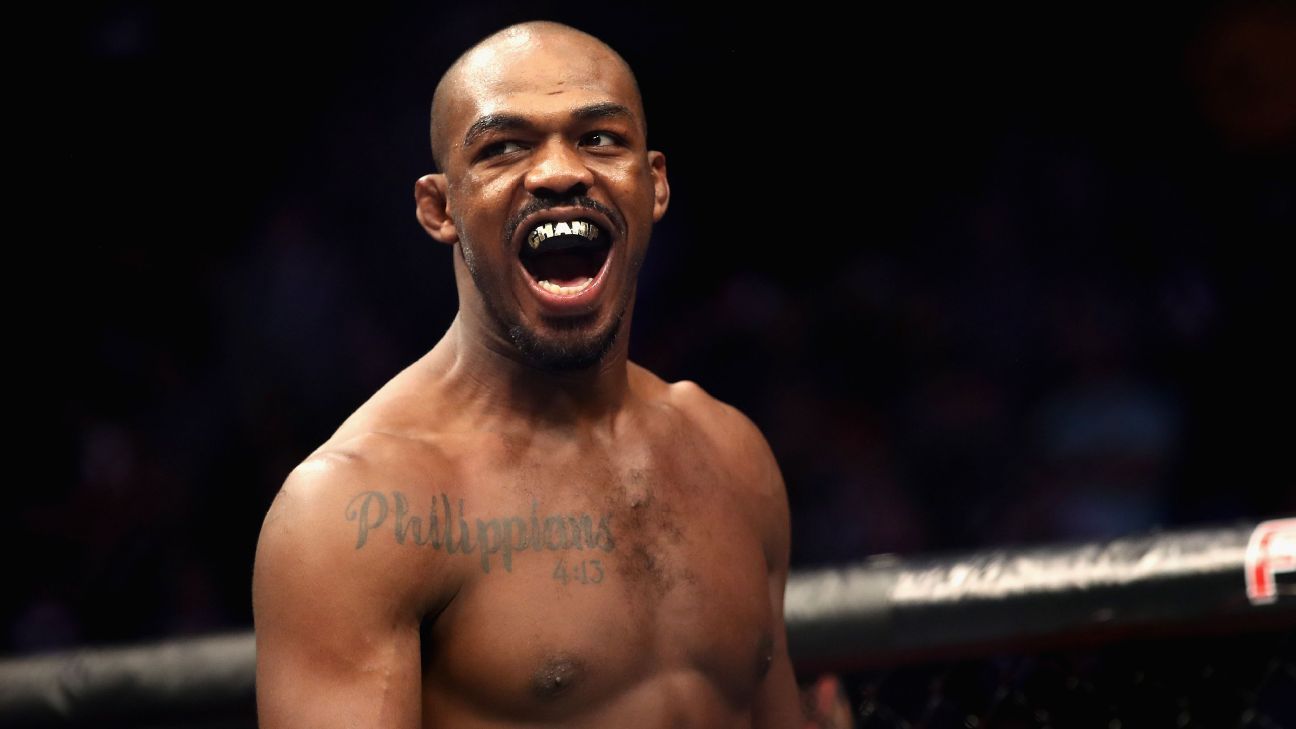 All right, here we go. One of my favorite pieces of the year: the fights I would love to see most in 2023.

I’ve done this annual piece for years at ESPN. You can find last year’s list here, and we did see a few (most of the ones we did see, delivered). Reminder: These aren’t fights I’m predicting will happen in 2023. They are the ones I’m hoping happen in 2023. But there is a chance we will see every single one this year.

Will this fight happen in 2023? It’s hard to predict, because it comes down to a new contract for Ngannou. The UFC has particular language in its contracts that it’s very reluctant to change. But some of that language is what Ngannou is looking to escape. When you get into negotiations and it’s about something other than money — structure, length and things of that nature — it gets complicated.

I’m cautiously optimistic this fight will happen in March — and it will be one of the most anticipated fights in heavyweight history. Jones has talked about this move to heavyweight for the better part of a decade, and when he vacated his light heavyweight title in 2020, we all knew this was his next move. It’s taken a long time, but the table is finally set.

If the stars align and Chimaev does his part, there is no reason he can’t compete for two championships in 2023.

Chimaev doesn’t have a fight lined up at the moment, but he’ll likely fight Robert Whittaker at middleweight. The UFC was already keen on him moving to 185, and now there’s a need in that division, with a proposed fight between Whittaker and Paulo Costa falling through. It would make sense to book Chimaev against Whittaker, with the winner expected to fight for the title.

If Chimaev were to win, a middleweight title fight would seem obvious, and if he were to win that, he would have that Conor McGregor 2016 kind of momentum that would warrant another title shot in a second division. I’m not trying to anoint Chimaev as a two-division champ prematurely, but he’s shown that level of potential, and if things fall into place, yes, I’d like to see him in that kind of opportunity. That’s a story the sports world would pay attention to.

Luckily, this one is already on the books for UFC 284. It’s a bit controversial putting this at No. 3. On the surface, it’s a slam dunk. Volkanovski is the featherweight champion and the No. 1 pound-for-pound fighter in the world, according to ESPN. Makhachev is the lightweight champ and No. 2 pound-for-pound. Perfect fight, right?

The only issue is the weight. Volkanovski is viewed, legitimately, as very undersize for this. And when you combine that with Makhachev’s dominant wrestling, it could be a mismatch. Almost like the situation years ago with Georges St-Pierre and Anderson Silva. The consensus top two fighters in the world should fight each other, right? Except Silva was much bigger than St-Pierre, so there was always that question: Does it make sense? The same is true of this. If Makhachev’s size and wrestling prove too much, will we all walk away saying, ‘Well, yeah, that should have been obvious going in.’

But you know what? I’m looking forward to finding out. Volkanovski has faced doubts before and responded by completely outshining a generational talent in Max Holloway and asserting himself as the top fighter in the world. He wanted this opportunity to move up, even when some advised against it. He’s an underdog, but is anyone willing to say he can’t pull it off? With all of the talent and preparation Volkanovski brings to the table, can he not win this fight? He can win this fight. And if he does, it will probably stand as the best win of the year.

This was on my 2022 list as well, although it came in at No. 12. I wanted to see it last year for two reasons: Stylistically, it’s a hell of a fight. And there is history here, with Vera defeating O’Malley in 2020 in a legitimate but rare situation (O’Malley suffered a nerve issue in his foot after eating a kick, which essentially left him hobbled).

Both of them had a massive 2022. Vera went 2-0, with violent performances against Rob Font and Dominick Cruz. O’Malley took significant steps up in competition and finished his campaign 1-0 with one no contest against Pedro Munhoz. His decision win over former bantamweight champion Petr Yan in October drew some scoring controversy, but any way you had it, O’Malley earned respect for the way he competed.

Vera is scheduled to face Cory Sandhagen in a barnburner main event on Feb. 18. If he wins, loses, or ties — the intrigue in this matchup isn’t going anywhere. O’Malley’s next appearance very well could be a title fight against Aljamain Sterling or Henry Cejudo. Wherever the dust settles on all those moving parts, I hope we get this fight next year. The stakes will be huge, and the prefight back and forth will be outstanding.

Whether for a title or not, this is an A-plus heavyweight fight. The ‘hype’ built around Gane in early 2022 has waned, as he came up short against Ngannou in a title unification bout. But most observers would agree that Gane’s best days are still ahead of him. He’s 32 and only entering his fifth year as a pro.

And part of that is because he’s exceptionally tricky. Ngannou figured out Gane couldn’t wrestle and took advantage of it. Beyond that, heavyweights have had very little success against Gane’s style. For all of the things Jones is known for, I admire his ability to rise to the occasion and on-the-fly fight IQ. If Gane has shored up his wrestling, he will be a massive problem in the division. But Jones is a master at identifying ways to beat someone. If this fight happens, the “technique” nerds of the sport will be geeking out over it. And that includes me.

Ryan Clark reacts to Conor McGregor’s tweet that he is clear for USADA testing in February.

Yeah, I miss Conor McGregor, and I won’t apologize. Call me a casual or a McGregor fanboy if you want. Go ahead. You know you miss him, too. I haven’t had him ranked in the top 10 of any division for a long time. But his superstardom is undeniable, and Chandler is a perfect opponent. Chandler is pure entertainment as well. I don’t need to write about this much because the appeal is obvious. Put this matchup on a PPV at 170 pounds in Allegiant Stadium in Las Vegas and let’s have some fun.

I thought their first MMA fight (at UFC 281) was the 2022 Fight of the Year. It was just so evenly contested. They both made in-fight adjustments. Adesanya nearly won in the opening round, and Pereira scored the finish he had to have. It was a beautiful fight, and I believe it will be again.

But adding further to that, Pereira has defeated Adesanya three times. That is a massive storyline. It was a big deal that Pereira had won twice in kickboxing before UFC 281, but now you add this? A fifth-round TKO in MMA? It feels like Adesanya is just cursed in this matchup. If he were to lose to him a fourth time, man. That’s a prominent tagline in his legacy — forever. What stakes! I can’t wait to see it.

Jones, the fighter, is such an important figure in MMA history. And let’s talk briefly about Greatest Fighter of All Time. You may have Jones as No. 1. You may have Khabib Nurmagomedov, Georges St-Pierre, Demetrious Johnson, Anderson Silva — one of those at the top. Regardless, if Jones moves to heavyweight and remains perfect and beats the likes of Ngannou, Gane, Aspinall, Curtis Blaydes, Sergei Pavlovich, etc., he will be the consensus GOAT. History will remember him as such.

And Aspinall, although he’s still recovering from injury, has been something of a phenom himself. He’s an agile, quick, well-rounded heavyweight. If they did this fight in England, it would be massive.

Sooner or later, Zhang will likely have to overcome what’s been her kryptonite thus far in Rose Namajunas. Likewise, one would expect Shevchenko will have to face Talia Santos a second time and prove she can be more dominant against her than she was when they fought last year. But if these two remain champs all year, a fight between them at the end of 2023 is ideal.

Shevchenko is everything one could ever want in a martial artist, the closest thing to a perfect martial artist this sport has. But Zhang is a human wrecking ball with a physicality that would indeed translate up to 125 pounds. If things fall right, this would be the biggest fight in women’s MMA in 2023. Even more so than anything the sport could conjure up involving Amanda Nunes, Cris Cyborg and/or Kayla Harrison.

UFC has been looking at this fight for months, and it’s promising right now for March. Gaethje wants a clear path back to a title fight, and Fiziev represents that with his six-fight winning streak. A dangerous fight for both, am I right? I’m confident it will land on PPV, but if it were to headline a UFC Fight Night, you would not hear me complain at all.

For one, Dariush deserves it. He’s riding an eight-fight winning streak, and all he does is agree to whatever challenge the UFC throws at him — even when the payout for winning isn’t apparent. It’s time for Dariush to cash in.

If Makhachev does beat Volkanovski in February, and let’s even say he does so impressively, he’ll be the No. 1 pound-for-pound fighter in the world while looking real Khabib-esque. As in invincible. The combination of his style and physicality will feel impenetrable. Dariush is the one lightweight who might make us wonder. His grappling ability is a potential game-changer against Makhachev — and there aren’t many potential game-changers out there against Makhachev for us to talk about.

It’s no secret that I have a pretty serious love for the featherweight division. Volkanovski is world class. One of the most complete fighters of all time. Holloway is a generational talent. Yair Rodriguez is a magician on the feet and just entering his prime. Brian Ortega‘s grappling and durability. Josh Emmett‘s power. Arnold Allen‘s power. Calvin Kattar is still right there. Emerging talent looks ready to make noise in Topuria, Sodiq Yusuff, Giga Chikadze, Movsar Evloev and Bryce Mitchell. This is the most exciting division in MMA and you can’t convince me otherwise.

The most intriguing name of them all is Holloway, because we don’t know what’s next for him. I believe he’ll stay at featherweight, although I also believe he’ll jump to lightweight if the right opportunity arises. But since he’s still a featherweight, what is his goal? The UFC will be very reluctant to ever book a fourth Holloway-Volkanovski title fight. I don’t know where that leaves Holloway; I don’t think anyone does. The only thing to do is to book him a meaningful fight and see what happens. If he’s going to fight, let him fight and answer the question of what’s next when you can. A fight between Holloway and Topuria, who is smoking with momentum right now, is the most intriguing matchup I see for Holloway. Bona fide Fight of the Year potential.