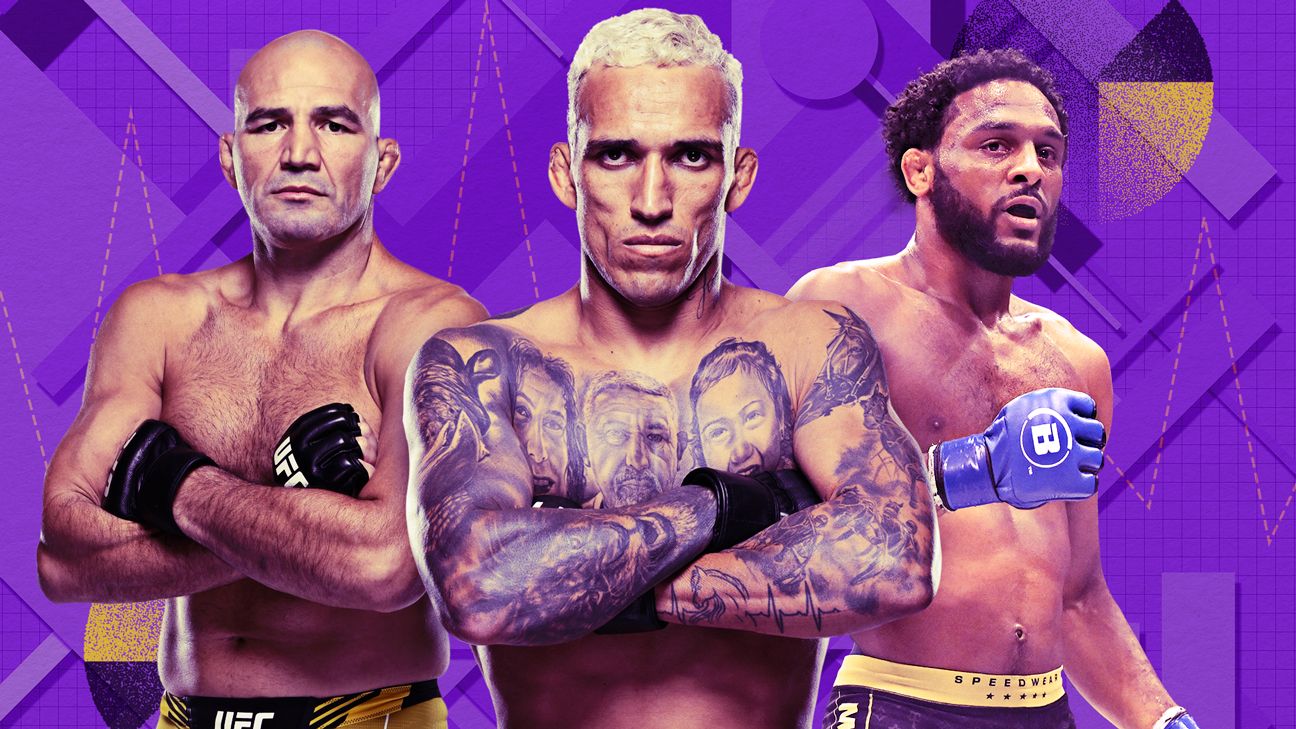 With the UFC returning to action this weekend with its first card of 2023, it’s time once again for ESPN’s annual MMA rank.

A two-step voting process involving ESPN’s MMA team set out to project which 30 fighters will have the best 2023. The final list features fighters across multiple promotions — veterans and rising stars, champions and contenders — ranked by their potential for success over the next 12 months.

In the first installment of the rankings, 30 to 21, there are two fighters who landed in the top 10 last year that now find themselves in the last tier. And a few new faces who are making their first appearance on this list. Megan Anderson, Brett Okamoto and Jeff Wagenheim break down the fighters and give their outlook for 2023.

Follow the link to each UFC result to watch a replay of that fight on ESPN+. Fighters 20-11 will be revealed on Thursday, and 10-1 will be released on Friday.

2023 outlook: Good luck trying to predict Teixeira’s 2023. On one hand, he’s 43 years old and has considered retirement before. On the other hand, he’s competing at the highest level of the game and says he’s not going to pre-plan anything when it comes to his fighting future. If Teixeira were to win the UFC light heavyweight title back at UFC 283 against Jamahal Hill and retire on top, it would be a heck of a year. If he were to win the belt back and go on and defend it two more times… a heck of a year. If he comes up short in January, who’s to say he won’t take another fight, look great and still have a heck of a year? Everything is still on the table for Teixeira in 2023 — which is wild to say given his already long tenure in the sport. — Okamoto

2023 outlook: If fighter stock were tradable on Wall Street, Kazakh welterweight Shavkhat Rakhmonov is Apple in 2019. He’s 16-0 as a pro, all coming by finish, and 4-0 in the UFC. Now in the top 10 on ESPN’s divisional rankings and training under Henri Hooft at Kill Cliff FC, Rakhmonov gets a step up fight against Geoff Neal at UFC 285. Despite a chasm in experience, Rakhmonov was more than a 4-to-1 favorite for their original booking this month. The 28-year-old sits on the cusp of that strong second-tier of fighters at 170 pounds, and pay-per-view events routinely serve as springboards into broader fan consciousness. Few will be eager to face Rakhmonov while his stock continues its climb to the moon, but should his trajectory continue in 2023, the best welterweights in the world may soon not have the option to avoid him. — Murphy

2023 outlook: No one has accomplished what Freire has in Bellator, both as a fighter and away from the cage. He reigned in both the lightweight and featherweight divisions simultaneously for two years, but now owns just one belt after vacating the lightweight title so his brother Patricky could go for the title. Patricio defeated the Rizin featherweight champion, Koike Erbst, at Bellator’s crossover event in Tokyo on New Year’s Eve, and now it’s back to the Bellator cage to further solidify his supremacy. “Pitbull” already has defeated the top contenders, but 145-pounders will continue to make the 35-year-old their target. — Wagenheim

2023 outlook: Rodriguez has a chance next month to remind the MMA fanbase why the UFC has been high on him for years. When he fights Josh Emmett for the interim featherweight championship at UFC 284, it will be just the third fight for Rodriguez since 2019 — and even his two outings during that span have had mixed results. He lost to Max Holloway in 2021, but was widely praised for his showing, then he defeated Brian Ortega after Ortega suffered a dislocated shoulder in the first round. A no-complications win over Emmett would say a lot about Rodriguez and earn him a date with real champ Alexander Volkanovski. — Wagenheim

2023 outlook: Coming off of a draw in his first light heavyweight title shot against Jan Blachowicz at UFC 282, Ankalaev’s future is a little dependent on the result of the fight for the still-vacant title between Glover Teixeira and Jamahal Hill at UFC 283. Against Blachowicz, Ankalaev showed he had the skill to be a champion in this division, and he believes he did enough in that fight to have come out with the belt. Because of that, he has a chip on his shoulder. This year, we’ll see a hungrier version of Ankalaev as he tries to work his way back to another title shot. Expect him to show a bit more urgency in 2023, and look for more finishes going forward to take the fight out of the judge’s hands. — Anderson

2023 outlook: Dariush is a wild card in the lightweight division right now, and this year may be the one where he gets his big chance. Considering he was supposed to take on the current champion Islam Makhachev back in 2020 before having to back out due to injury, I would love to see him get a shot at Makhachev for the title. Time and time again he’s constantly proving doubters wrong by showcasing his high-caliber skill. Dariush is ranked No. 3 in ESPN divisional rankings, but would likely have to beat either Charles Oliveira, Dustin Poirier or Justin Gaethje before getting a crack at the title. — Anderson

2023 outlook: We’re getting a glimpse into the future of elite heavyweight MMA with Ciryl Gane. At 6-5 and a chiseled 250 pounds, he’s nimble on his feet and explosive with his hands. There’s no room between No. 1 contender Gane and the top of the divisional ladder, but his 2023 outlook relies mostly on the health and contract status of champion Francis Ngannou, as well as Jon Jones’ maiden heavyweight appearance. If Ngannou finally welcomes Jones to the division this spring, Gane could get paired against the remarkably dangerous Sergei Pavlovich before earning another title shot. Jones has also claimed proximity to booking an interim title bout against Stipe Miocic, which might leave Gane even further from UFC gold when Ngannou returns. On any given day, the fighting pride of the 12e Arrondissement de Paris could be the best heavyweight in the world. But Gane may need to showcase another valuable fighting attribute — patience — before he’s able to prove that. — Murphy

2023 outlook: Nurmagomedov will go into 2023 in arguably the best position of any fighter on Bellator MMA’s roster. The company is keen on announcing a lightweight Grand Prix, which Nurmagomedov will enter as the division’s undisputed champion. Common sense would say Bellator will stack its tournament with as much talent as possible, meaning Nurmagomedov could end up in a bracket that contains names like A.J. McKee and Benson Henderson. If Nurmagomedov extends his undefeated record, defends his title and dominates a Grand Prix against the biggest names of his career — yeah, it would make for a good year. — Okamoto

2023 outlook: McKee ended 2022 with a high-profile win in the main event of the Bellator vs. Rizin spectacle in front of over 20,000 fans in Tokyo. Now it’s time for him to get back to work inside the Bellator cage. A former featherweight champion who split two meetings with current titleholder Patricio “Pitbull” Freire, McKee moved to lightweight in the fall and is in position to challenge Nurmagomedov for the belt in that division. There’s been no announcement of that matchup, but at age 27, McKee is a homegrown talent for Bellator, and he has plenty of opportunities ahead. — Wagenheim

2023 outlook: Doubt Oliveira at your own risk. That’s a lesson we learned again and again in 2021 and 2022, and we’ll see if it surfaces in 2023. Make no mistake, going into 2023, Oliveira is more beloved now than he’s ever been in his career. Many in this sport used to call this man a quitter. Now, he’s revered for the size of his heart. That said, Oliveira’s path forward into big fights and/or title fights is unclear at the moment. His opportunities in 2023 don’t feel obvious. Nevertheless, fans love Oliveira for his character and fighting style. They’ll watch whatever fight he’s in, and wins will inevitably lead to big fights. — Okamoto