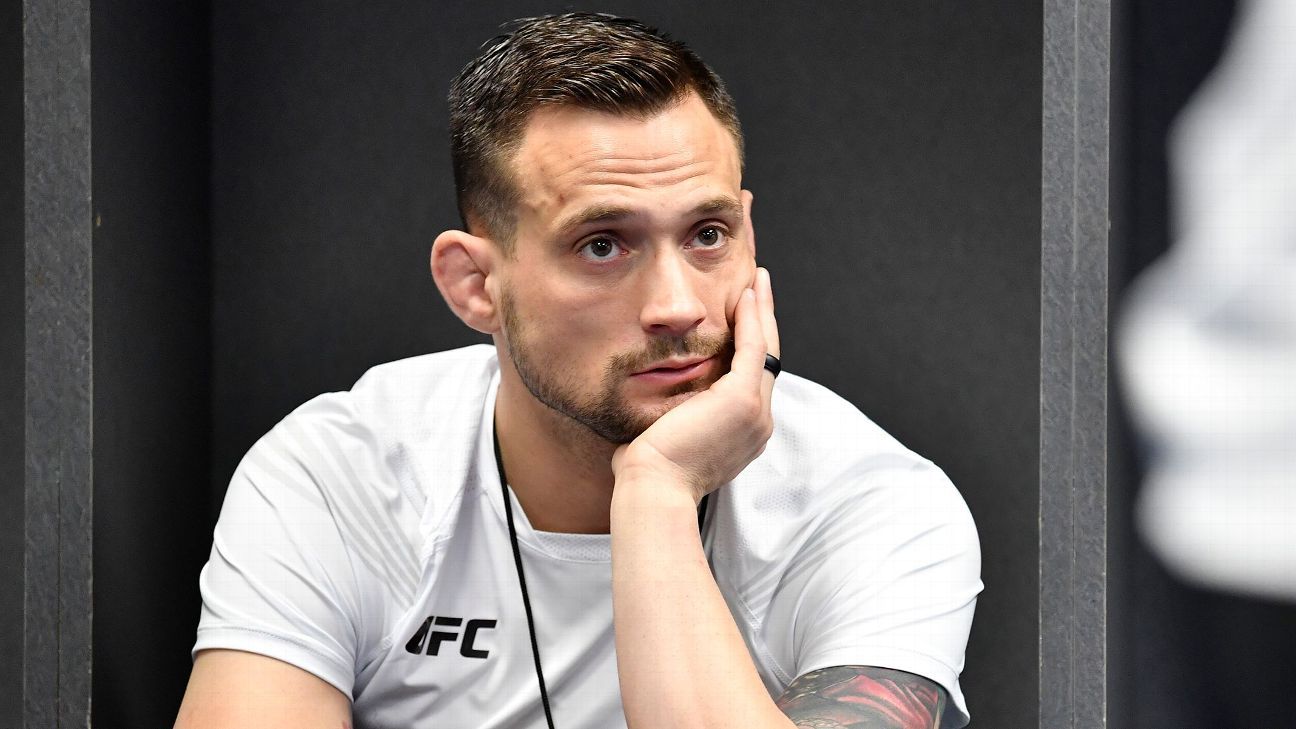 A suspended MMA coach at the center of an ongoing betting scandal in the UFC has acted as an agent for an offshore bookmaking operation for years, multiple sources who placed bets with him told ESPN.

James Krause, 36, has worked as an agent — the term for a middleman between offshore sportsbooks and bettors — for ABCBetting.ag, according to people who wagered with him as far back as 2019. The .ag domain is for sites in Antigua and Barbuda.

Krause also has publicly acknowledged being part of an online betting group that employed sophisticated tactics, including taking over other bettors’ sportsbook accounts to circumvent betting limits.

Multiple government agencies are investigating a Nov. 5 UFC fight in Las Vegas between Darrick Minner, who was coached by Krause, and Shayilan Nuerdanbieke after it was flagged for suspicious betting activity. New Jersey and New York sportsbooks, as well as offshore bookmakers, reported unusual betting interest on Minner to lose in the first round and for the fight to last fewer than 2.5 rounds. He lost by TKO just over a minute into the first round.

In the month after the fight, gambling enforcement authorities in New Jersey halted wagering on any events associated with Krause, and two Canadian jurisdictions temporarily suspended betting on the UFC. Multiple sources have told ESPN that the FBI has been collecting information and interviewing people about the fight.

Krause and Minner were suspended indefinitely by the Nevada State Athletic Commission for failing to disclose an injury on his prefight medical questionnaire. Jeff Molina, another fighter in Krause’s gym, was also suspended. The UFC released Minner and notified fighters who continued to train with Krause or at his gym, Glory MMA & Fitness, that they would be banned from events pending government investigations.

Until his suspension, Krause was considered a top up-and-coming coach in the sport, guiding the careers of several UFC title contenders, including UFC interim flyweight champion Brandon Moreno.

The UFC did not prohibit fighters or their teams from gambling on bouts, including those they were involved in, until October, and interviews with fighters and managers throughout the sport have indicated that betting has been widespread. Twenty-four states and Washington, D.C., have rules against athletes, coaches or related figures betting, but most of those put the burden of complying on sportsbook operators. Only four — Colorado, Michigan, Virginia and West Virginia — have penalties for the person betting, according to data compiled by Legal Sports Report, which tracks sports betting legislation.

Krause has not spoken publicly about the Minner defeat, and he did not respond to ESPN’s requests for comment.

Minner told ESPN last week that he has not been contacted by the FBI. Asked whether anything improper happened before the Nov. 5 fight, Minner said, “Absolutely not. Nothing out of the ordinary.”

He told ESPN he had a minor knee injury before the fight that he injured further during the bout. A doctor later determined that he tore ligaments around his knee, Minner said.

Asked whether Krause might have been involved in offshore betting operations, Minner declined to comment. He said he would have his attorney answer further questions and ended the phone call. He did not provide the attorney’s name, and no attorney for Minner reached out to ESPN. Minner did not respond to subsequent messages from ESPN.

According to sources who spoke to ESPN on condition of anonymity, Krause was an agent for Costa Rica-based online sportsbook ABCBetting.ag. Bettors who said they wagered with Krause told ESPN he provided them with a line of credit and login information. They placed their wagers on the site and paid Krause directly, they said. One source who bet with Krause told ESPN that money was exchanged using Venmo or PayPal.

“He asked if I wanted to bet with him and gave me a username and password,” another source told ESPN. “I think I won like a couple hundred bucks, and I ended up playing it through and losing.”

That source added that Krause offered to give them a portion of the proceeds for any bettors they referred to him. “‘Whoever bets, I’ll give you kickbacks,'” the person recalled Krause saying.

Offshore sportsbooks operate outside of U.S. regulations in countries like Costa Rica, Panama and Antigua and Barbuda, where they are licensed. Some rely on networks of agents, often located in the U.S., to acquire customers and handle payments. U.S. residents who have worked as agents for offshore sportsbooks have been charged with crimes such as tax evasion, operating an illegal sports betting organization and money laundering. The Department of Justice has accused offshore sportsbooks that serve U.S. bettors of violating the Wire Act, a federal statute that prohibits those “engaged in the business of betting” from knowingly transmitting wagering information across state lines.

Last March, Krause launched a subscription service featuring his betting tips called the 1% Club on social media platform Discord. He told the podcast “The MMA Hour” in August that the Discord had about 2,000 subscribers, some of whom paid as much as $2,000 a month. Active members of the 1% Club included a self-proclaimed professional bettor known as “Shay” and several UFC fighters, including Molina, a 25-year-old UFC flyweight.

Krause also told the podcast he bets on UFC bouts, “every single card, just about every fight,” including some involving fighters he trains.

While Krause said he primarily bets on MMA and boxing, he considered others in his group to be experts in sports like football and basketball.

“I have a couple guys in the group that are some of the biggest players that I have ever personally known,” he said on the podcast. “[They’re] doing very, very large numbers per play.”

Molina, the fighter trained by Krause and now under suspension in Nevada, wrote in the 1% Club on April 10 that “the insight Krause has in this sport is insane.”

“He’s trained w/ a lot of the fighters, lives and breathes this sport as a coach/fighter, & at times has the scoop on injuries — non-announced matchups — how fighters look like in camp, etc.,” Molina wrote in touting the club. “In stocks this is called insider trading in MMA betting it’s called James Krause. For the last 6 months all my bills including mortgage and car note have been paid via Krause’s picks. Do yourself a favor and join the VIP.”

Molina has described himself on Twitter as an “MMA gambling degenerate” and often posted screenshots of betting slips online. He wrote in a social media post on Dec. 25 that his suspension in Nevada stemmed from “betting on UFC just like half the roster does.”

Molina did not respond to ESPN’s requests for comment.

Krause made no secret of his prolific betting. He hosted a betting podcast that was broadcast on the UFC’s streaming platform, UFC Fight Pass. The episodes have since been removed. Krause also appeared as an analyst on a UFC Best Bets show for ESPN on YouTube in 2021.

In August, Krause posted in the Discord that his betting group was looking to take over other bettors’ sportsbook accounts, especially “offshore credit accounts” and “VIP” accounts with regulated sportsbooks like DraftKings and FanDuel. He promised to place “our sharpest wagers.” Known as “account takeovers” or “betting partnerships,” this practice is common among professional bettors, who have had the amount they can wager limited by sportsbooks, so they can disguise who is placing the bets and get around the restrictions.

“I take over people’s accounts and play for them,” Krause told “The MMA Hour.” “I do pretty well.”

The 1% Club Discord was shut down roughly three weeks after the Minner-Neurdanbieke fight. ESPN has reviewed screenshots of Molina and Krause’s posts.

Joe Wooster, an MMA promoter in Kansas City who said he is a good friend of Krause, listened to “The MMA Hour” interview and said he thought Krause was just “upselling his product.”

Wooster told ESPN that Krause’s actions were not against the rules until the UFC changed its policy in October, “but now it’s a huge, big deal because of some implications.”

Krause has said he first tried MMA when he was about 19 or 20 years old, partly because he was small for his age and wanted to gain confidence.

From there, Krause built a successful career and a burgeoning MMA empire. According to his divorce filing in 2021, his gross income was about $12,000 a month, or $144,000 a year; he drove a 2017 Audi S8 and a 2015 Porsche 911, valued at about $65,000 and $120,000 respectively; and he ended up with six of the eight properties he owned with his ex-wife, Shynel, in the Kansas City area. Jackson County property records show that Krause, or his real estate company Fight Brands, currently own 14 properties.

As a fighter, Krause was never championship-level, but he had a strong career as a lightweight and welterweight. He made his professional debut in 2007, entered the UFC in 2013, and over eight years accumulated a 9-4 record. He put together a six-fight winning streak from 2015 to 2019, and ended his career with a unanimous decision victory over Claudio Silva in October 2020. He announced his retirement this past August.

About nine years ago, he and partners bought Grindhouse MMA, the Lee’s Summit, Missouri, gym where he trained, from his coach, Brian Davidson, and rebranded it. In 2012, Krause and Wooster also established the KC Fighting Alliance, which puts on fights locally. (The promotion, now called the Fighting Alliance Championship, has distanced itself from Krause since his suspension.)

In a January 2022 article on UFC.com, Krause is described as “a founder of MMA in Kansas City” who helped turn Missouri into “a global destination for athletes.”

“Everyone was having to move to the coasts for the big hubs to train,” Krause said then. “If you really wanted to make it, that was what you had to do. Thanks to what we’ve accomplished over the years, that’s just not the case anymore.”