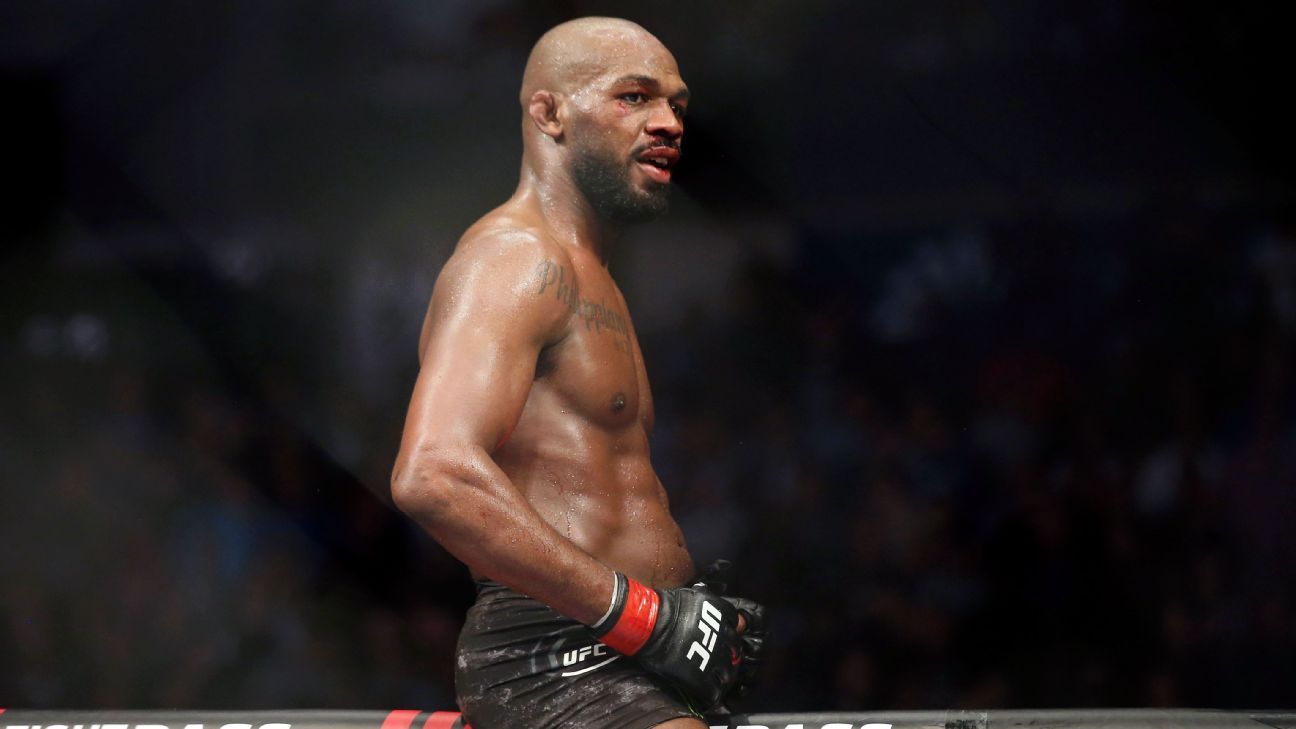 Jon Jones has been talking for years about fighting at heavyweight. For much of his dominant reign as UFC light heavyweight champion, he had one eye fixed on the big boys.

Even during the week leading up to his 205-pound title defense against Dominick Reyes in February 2020, Jones seemed more focused on the heavyweight king of the time. “I feel like I really want to fight Stipe Miocic,” he told ESPN. “I feel like I could beat him.”

By the following May, Jones had shifted his focus to a different heavyweight, Francis Ngannou, whose sledgehammer fists were terrorizing the division. “All that power means nothing when your haymakers are too slow,” Jones wrote to Ngannou on Twitter.

But neither of those heavyweight matchups came to fruition. In fact, no Jones fight occurred for nearly three years. But on Saturday night, the UFC announced that Jones will face Ciryl Gane at UFC 285 on March 4 in Las Vegas. The bout will be a title fight, as the UFC announced it had stripped the champ, Ngannou, of his belt and released him from the roster.

This unfolding scenario for Jones was a wild turn of events, which is par for the course for a fighter whose entire career has been an express train chugging to glorious heights only to be derailed again and again.

What does all of this mean for Jones, the fighter many consider the greatest of all time? ESPN’s Brett Okamoto, Marc Raimondi and Jeff Wagenheim try to make sense of it.

After a long layoff and remake of his body, what are realistic expectations for Jon Jones?

It’s hard to set expectations for someone who has not fought since early 2020 and has bulked up considerably into a new weight class. Jones is the greatest MMA fighter to ever live — full stop — as no one has accomplished more. Yet he’ll go into this heavyweight title fight with Gane as somewhat of an enigma.

Let’s not forget that the past two light heavyweight title defenses for Jones were a bit lackluster in 2019 and 2020 (before the coronavirus pandemic started, by the way). Many thought he should have lost a decision to Reyes, and prior to that, Jones had a difficult time with Thiago Santos, who was fighting on two blown-out knees. The thing about Jones is that he has an innate sense of fighting and knows how to win MMA contests. No one in the sport’s history has come close to Jones’ savantlike acumen.

People have for years talked about his generous physical attributes. While they’re not wrong, many fighters who have been just as gifted have never come close to doing what Jones has in accumulating an 18-fight unbeaten streak and 11 title defenses. The one thing Jones has had in this move to heavyweight is time. And it seems like, by all accounts, he has been working hard and putting on the weight the correct way while adapting to it from an MMA training standpoint. He is still training with excellent coaches in Albuquerque, New Mexico, and Scottsdale, Arizona. We can’t expect a prime Jones in two months — that would not be a fair expectation — but we should see a prepared one. — Raimondi

What would a win mean for Jones’ legacy?

Just like every single thing in Jones’ career, it’s complicated.

Many fans and pundits already consider Jones the greatest MMA fighter of all time; others shake their heads at his multiple failed drug tests and disqualify him from GOAT talk. And while adding a second divisional championship to his résumé would situate Jones among an exclusive club of UFC greats, even that accomplishment would come with an asterisk, because having the UFC belt wrapped around his waist would not make him the No. 1 heavyweight in the world. Nope, not with Ngannou still walking the earth.

And yet what a night it will be on March 4 if Jones can step inside the Octagon for the first time in more than three years, do so with a totally remade bulky physique that he hasn’t yet test-driven and make his heavyweight debut a smashing success. If Jones can conquer Gane more emphatically than Ngannou did — Gane and Ngannou went five back-and-forth rounds last year — that would add luster to a legacy that’s already blindingly shiny. But it seems to me that this heavyweight debut is just another new beginning for Jones. Can he keep building this time? — Wagenheim

How did we get to Ciryl Gane? What happened to Curtis Blaydes and Stipe Miocic?

The best option and the right choice. He is ranked No. 1 at heavyweight, one and two spots ahead of Miocic and Blaydes, respectively. Gane deserves this, and it just so happens he is the most marketable option in the division. His only loss at heavyweight is Francis Ngannou. Other than that, Gane is 8-0 in the UFC. He is the most worthy heavyweight title challenger. When the UFC was looking for a big fight in December, Miocic and Blaydes were options, but now that everything has reset, Gane is the right option based on timing and marketability. So, here we are. — Okamoto

Is Gane the worst possible matchup for Jones’ debut at heavyweight?

Gane is a tough matchup for most heavyweights, but Ngannou would have likely presented a much harder code for Jones to crack. While Gane has the striking ability and athleticism to stand up with Jones, he was also taken down several times by Ngannou, who is a power puncher and no one anyone would confuse with a wrestler. Jones is a wrestler — and a very good one. He outwrestled Olympian Daniel Cormier in two fights. Gane will be well aware of that and concerned with it, perhaps to the degree that it’ll make him less slick and aggressive on the feet. That opens the door for Jones, who attacks with front kicks to the knee, elbows and long left hands. No one would ever confuse Jones for a knockout artist, but his striking is dangerous in its unpredictability, length and unorthodox angles.

Ngannou would have been more difficult for Jones to take down, and of course, he can knock out anyone on the planet with one punch. Gane has power in his hands, but not more than a majority of the heavyweights in the division. His standup isn’t completely impenetrable, either. Tai Tuivasa knocked Gane down with a punch in September before Gane came back to finish. Jones is going to be different from anyone Gane has ever fought before. Gane will be bigger than anyone Jones has ever fought before, but Jones has faced various styles and beaten them all.

One of the first things to notice when these two clash is the hand speed and general quickness. That was always a strength for Jones at light heavyweight when he was in his 20s. Gane is speedy for a heavyweight. Will he be faster or at least as fast as Jones, who has bulked up considerably? Even if Gane is significantly quicker, Jones will still have the wrestling advantage in his back pocket. He could put Gane on his back early. That’s likely something MMA Factory coach Fernand Lopez, Gane’s mentor, is already thinking about. — Raimondi