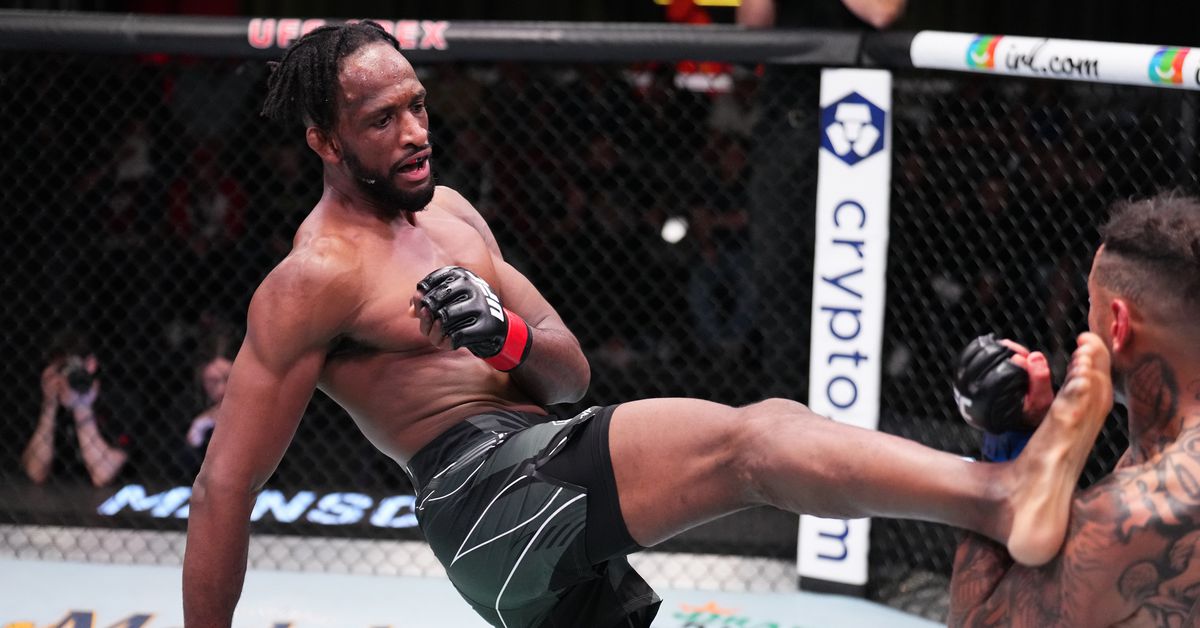 Neil Magny admits that with Khamzat Chimaev, he bit off more than he could chew.

Over the past couple of years as Chimaev has risen up the welterweight ranks, Magny has been perhaps the most vocal 170-pounder calling for a fight with “Borz.” Despite his repeated efforts though, Magny has yet to get his opportunity. But this past November, Magny did get the chance to train with Chimaev for a session — and things did not go well for him, with a video coming out showing Chimaev dominating Magny with relative ease.

While short training clips like that often don’t tell the whole story, Magny admits that he really did have a tough time with Chimaev.

“I went in there thinking, ‘Oh, here’s this sweet little wolf that I can train with in jiu-jitsu,’ and then things got real, real fast. There’s more hats to the guy, more so realizing, damn, this guy is actually the real deal. He’s not a fighter or fight I can take lightly at all. If I’m being honest, had I got that fight early on, I might have set myself up for failure, looking past him a little bit.”

Magny went on to explain the the training session was a “pure coincidence” that simply arose because both men happened to be in New York and went to the Renzo Gracie Academy to get some work in while they were there. Given Magny’s continued pursuit of a fight with him, and Chimaev’s history of run-ins with potential opponents at the gym, things could have gone south quickly, but Magny says it wasn’t like that at all.

“Initially there wasn’t any tense moments at all, it was just an opportunity where it was like, ‘I’m here to train, you’re here to train,’ it was very respectful, going through the motions, not super competitive,” Magny said.

“But that escalated very quickly. It went from that to a full on grappling match, getting slammed, all this kind of crazy stuff. So yeah, it definitely escalated quickly there.”

But while that escalation ended poorly for Magny, he’s not hiding from it. The No. 12 ranked welterweight in the UFC rankings has no illusions about what happened that day, but that doesn’t mean he still doesn’t want to fight Chimaev, nor does it mean he thinks he can’t beat him.

“There’s a video out there so I can’t even deny it, he definitely got the best of me that training session,” Magny said. “Like I said, I f***** around and found out, and I definitely found out the hard way. ‘Oh yeah, sweet little wolf, here we go, we’re just playing around,’ and that wolf definitely bit, and I was like, ‘Oh crap, I was not expecting that.’

“At the end of the day, I could give make excuses for it. ‘Oh, I wasn’t giving it my all, maybe it was this, maybe the fact that he was bigger,’ I could give you a thousand reasons why that training session didn’t go in my favor, but at the end of the day, it didn’t, and that kind of gave me a dose of reality. Alright, you got some s*** to work on.

“I’ll never be one of those guys to sit there and be like, ‘Oh, my opponent got lucky, this happened,’ or blame [anything]. I’m just not going to make an excuse for it. He definitely got the best of me that day, but I know that’s not the end of it. I know I have a lot more in me than what I showed that day and it’s just up to me to go out there and prove it.”

Before Magny can get a crack at Chimaev though, first he has another top-ranked opponent to take care of as this Saturday he fights former title challenger Gilbert Burns in the featured welterweight fight at UFC 283.