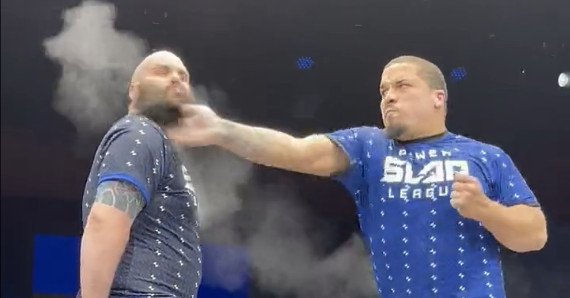 Shock, disgust, and mockery has been the reaction to Dana White’s Power Slap League among many combat sports veterans and observers.

While the majority of the fighters under the UFC banner have been silent, others have spoken out about the new TBS program, which features fighters slapping each other repeatedly until a knockout or a decision is rendered.

In Power Slap, defense is expressly forbidden, and competitors are required to hold a bar behind their backs. They are not allowed to move in ways that might blunt the force of the oncoming slap, though slapping fighters are punished for leading with the palm of their hand.

The show’s first episode, which drew 295,000 viewers to rank No. 45 in cable programs on Jan. 18, featured several brutal knockouts. Reaction to them largely mirrored the concerns of brain trauma specialists who pointed out the guaranteed brain injuries that would be sustained and the potential for long-term brain injuries.

Below are a few reactions to the Power Slap League.

A few things that make combat sports so great, the art of defense and countering. Not standing with your hands at your side and taking blunt force trama to the dome, while an Olympic power lifter tries to knock cerebral brain fluid out of my ears and nose. #powerslap

At least they put chalk on their hands prior, helps the coroner identify who delivered the game winning TBI. #PowerSlap

I don’t want to know how much money went into this Power Slap shit. Why not put that money towards making the UFC a better overall product and legitimizing the sport? It’s also dumb af lol. ️ ‍♂️

That being said, no licensed Nevada official should be taking any part in this. They should take a stand and say “No I’m not doing that” Every man involved will have to eventually account for their decisions. Sometimes the hardest road is the right road to take https://t.co/e4qoGwUxMu

Exactly that. The skill level is only what God allows you to withstand. Handing out Trauma to the brain with no ability to defend against it only makes this appeal to people wanting to see a train crash and that’s what they will get https://t.co/odfxSgqDBo

Power slap is a horrible idea and needs to be stopped

Bro don’t miss the obvious, we have a chance to defend they don’t it’s just stupid no need to debate

Pretty wild, honestly. I just don’t get it ‍♂️

Checking out the Slap fight league. This is the stupidest shit I’ve ever seen. The fact it’s associated with the UFC sets the sport back 10 yrs. All that being said it’s entertaining. Anyone wanna bet it’s not around in a year?

Gonna be honest, I think power slap is fucking stupid. It’s basically the bitch version of Russian roulette and takes no skill to win if you have no brains to rattle.

I just don’t see the attraction to Power Slap. Feels like you have to be sadistic to like it.

If anything, power slap is showing the importance of turning back your shoulder and torquing your torso into the shot. “Turning of the hip” potentially the wrong terminology being used. Hips less important? Possible also. Turn your shoulder back and torque fully into strike! K.O.

I could potentially be the Joe Rogan of Power Slap.

I have absolutely no respect for Dana White. His ownership in the Power Slap League is a game of shame. It shows his lack of care for human health. If I were in the UFC and was shown some love by him I’d question all of it.